This will be one part “conclusion,” covering my last day, and one part “photo-dump” for shots I couldn't work into prior posts, and other random thoughts.

Friday
The final event of my week in Ohio was a visit from John’s son’s family.  I used to read to his boy, Justin, when he was a toddler.  Now he has 4 kids of his own.

Anyway, he’s been in off in the Navy and I haven’t seen him in many years, nor had I met his wife yet, so there was much festivity to the event.  Also in attendance, just to round out the day, were John’s other son Jay, with his girlfriend and daughter (that’s two people), Rik, with Jacob and daughter Kia, who also had her two kids.  Needless to say, it was a real circus.

But our mantra is, “When in doubt, fire up the grill.”  Justin taking over the grill from John reminded me of when John first started going on the Cleveland trips with us to watch the Steelers games, and he took over the grill duties from my dad.  It was kind of like the passing of the torch.
The Rik also took a turn or two.
While the food was cooking, the kids found things to do.
Rik’s grandson, Brogan, found other things to do, like play with his Pappy.
Later, we took time out for a Family Menfolk Portrait.
The kid may be taller than his dad, but he hasn't caught up to Uncle Bluz just yet.
Obviously, Rik wasn't the only proud Grandpa there.  John got to spend some time with his newest granddaughter too. 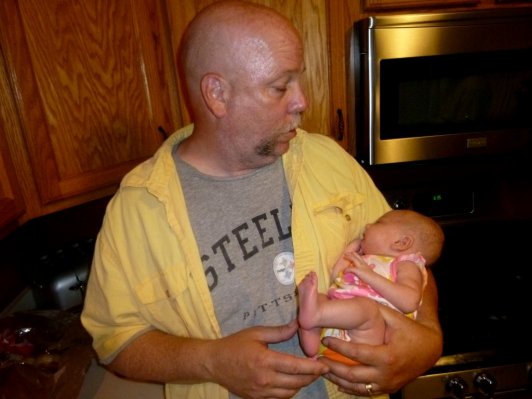 We also had baby-watching help from granddaughter Jayden. 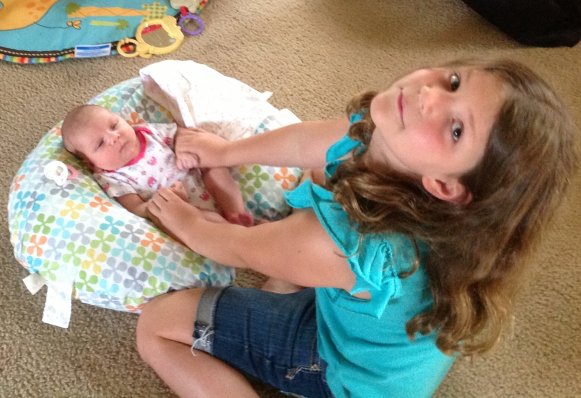 But I figured, if I could survive changing my nephew's diaper, I could deal with a baby laying on the floor.  But naturally, the very second her mommy left the room, she started crying.  But I was able to go over and calm her down by talking softly to her and using Jedi Mind Tricks.  Uncle Bluz has powers!

We also celebrated his grandson Gavyn’s 10th birthday.
I know I always joke about going out there and just hanging around in John’s garage, but the appeal should not be underestimated.  For one, you never know what kind of wildlife you’re going to see.

For example, this scene, straight out of Animal Planet, took place right across the street.
Bunny Fiiiiiiiight!

John has also done some considerable work with the plantings around the front of the house.
And this was outside John’s Dad’s garage:
There was also some work to be done.  Rik needed a dowel rod cut and a hole drilled in it, for Jake to use as a training aid for baseball.  (Don't ask.)  Luckily he was in the right place.  John has, as Tim Allen used to say, "Tools to fix tools."
Katie Ett can probably back me up here, but Ohio seems to get some of the most interesting cloud formations.  Every night, I think, we had the threat of thunderstorms, so there always seemed to be something dramatic on the horizon.
I know we get such clouds in Baltimore… maybe it’s just that there are so many buildings and stuff in the way, I don’t see the grand vistas, as provided by John’s garage.  Maybe I need to get a garage.

I may joke, but I don’t really go out there every year to see baseball games, clouds, pizza or dueling bunnies.  I keep going back because old friends are the best.  You can’t bullshit old friends because they know you better than you know yourself.  Seeing old buddies keeps continuity in your life and reminds you of your roots.  I wouldn't want it any other way. 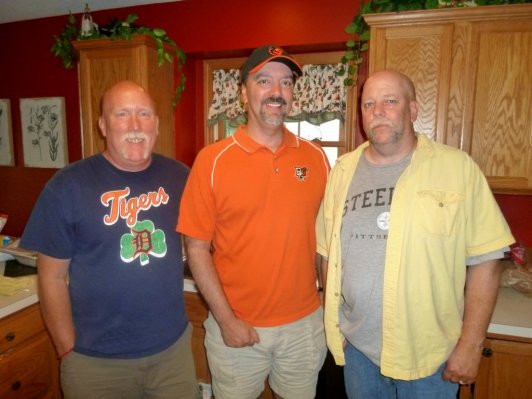 As a final note, let me wish a happy 53rd anniversary to my parents, whose infinite wisdom landed us all out there in farmlands of NW Ohio in the first place.
Posted by bluzdude at 1:54 PM

Email ThisBlogThis!Share to TwitterShare to FacebookShare to Pinterest
Labels: Bluz LIfe, Picture This, The Family Business, The Glory of Meat