The Best Damned Band in the Land

I don’t usually go nuts over college football, but I do follow Ohio State.  Any OSU fan knows that besides the football team, the marching band is also a huge draw.  They may not be as flamboyant as other bands, in that they don’t do a lot of dancing around, but their creativity and precision is off the charts.

My dad sent me a clip of the band from last week’s game, and it just knocked my socks off.  The band does a Tribute to Movies, featuring the themes from Superman, Harry Potter, Titanic, Jurassic Park, and others, but with applicable choreography.  You have to see it to believe it.

I just wonder what it takes to come up with an intricate routine like this?  Who thinks it up, and how long does it take to practice?  I mean, they have to do something every week, don’t they?

I only have a short post for you today… I have another day planned to spend at the sports bar.  The Steelers game against the Patriots isn’t on local TV; both they and the Ratbirds game against the Brownies are on at 4:25.  (Every market in the country is getting the Steelers/Patriots, except Baltimore and Cleveland.)

Because I don’t want to risk not getting my preferred seating, I usually show up around noon, and sit through all the 1:00 games.  So pity me, as I’m forced to endure giant hamburgers, wings and cold beer for seven hours today.  Alas… 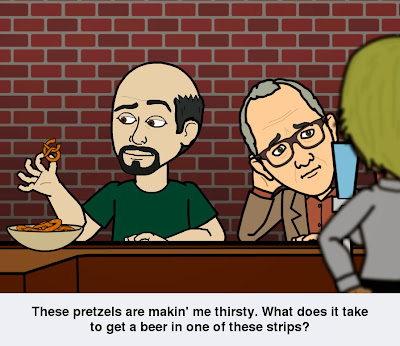 The band did a great moonwalking Michael Jackson the week before that. If you haven't seen it, you should.

I saw it... In fact that's what I though my dad' clip was going to be. That T-Rex bit was so cool.

Several friends posted clips on FB last week, but since OSU kicked the crap out of my team, I could not bear to watch them. I must say it was pretty spectacular. I too am amazed at how someone comes up with all those details and moves, and then all those students carry it out.

Have fun today. I am not feeling it; I had accepted before the season started that the Steelers would not have a winning record. I was putting them at about .500, but I may have overshot. We shall see.

I don't have any faith in this season's team, either, but I still have to see the game. It's actually easier once you've given up hope. At least the Ratbirds lost today too, to the Browns, to add insult to injury.

Either one works for me...

I've seen this band video, and it is damn good!

But I'd rather eat pretzels and watch anything other than OSU football...

You say that as an Ohioan? Blasphemer!!

oHIo! Of course I was enthralled by this post from the get-go. Even though I have absolutely no idea what's going on in OSU football at the moment. I've watched one football game at a bar in my life, and it was a disaster. But your burgers and wings and beer have me tempted to try again.

Lucky for you, this post has nothing to do with football...

Back in the the day, I was in the marching band. That shit is hard. Mostly because I don't know my right from my left. So when the turns came, I was always going the wrong way.

Sounds like the story of your life... Always going the wrong way... But at least it's YOUR way, and that's what makes it interesting.