You may have noticed that I haven’t been writing a lot about football, this season.  Mostly it’s been on purpose, but recently, there just hasn't been much to write about.  The Steelers have been miserable this season.  The high point was probably beating the Ratbirds in October.  Low point, no doubt, was losing to them on Thanksgiving night, in the “Tomlin-gate” game.

All week long, that’s all anyone wanted to talk about… our coach getting caught watching the scoreboard, with a foot on the field.  At least the Internet produced some funny memes out of the whole affair.  This was my favorite, just because it's so well done: 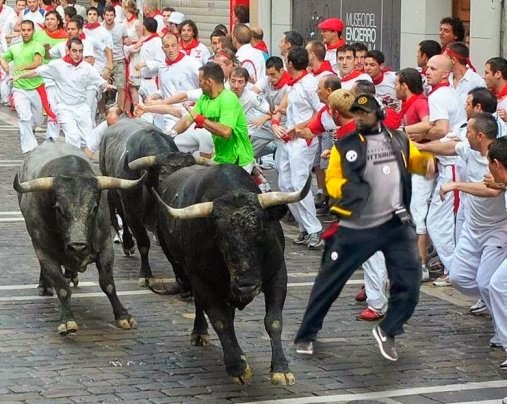 (Thanks for the email, Dad.)

Another by-product of the Steelers sucking this year and last, is that fewer of their games are on local TV this year.  I've already seen more games at my local sports bar than I have in any other year.  Mind you, I’m not complaining.  I always have a great time there, and the food is excellent.  (I hear there’s beer there, too.)

So I was there again last Sunday, and it really served me well.  The snowstorm that was pelting the eastern portion of the country made itself known in several of the football games, including the one right here in Baltimore against the Vikings.  It was the first time it had ever snowed heavily on a Ratbird home game.

In looking up at all the screens, I could see the blizzard play out in Pittsburgh, Baltimore, Washington and Philadelphia.  It was snowing so hard in Philly, the game looked like one of those old football highlight films from the 1940s.  And it was funny to see the Browns and Patriots playing (in New England) without any snow at all.  What are the odds?

So even though the Ratties won and the Steelers lost (to the damned sunshiny Dolphins), it was a fun afternoon, just for the sheer “WTF” of it all.

Then I saw in the paper, Monday morning, that Viking running back Adrian Peterson tweeted that the Raven fans were throwing snowballs at the players, and registering his disgust.

“Wow talking about bad officiating & the worst fan base I've ever experienced! They threw snow balls the entire 4q like lil kids. Smh”

“Worst fan base I've ever experienced.”  Wow, now I have something in common with an All-Pro running back.  I've been saying that for years.  It’s not exactly surprising… it’s always seemed to me that the patrons of M&T Bank Stadium, aka, “That Big Purple Toilet” felt the need to model themselves after the Philadelphia Eagles fans.  But at least the Eagles fans know something about football.

“Who doesn't throw snowballs when it snows?  Maybe Minnesota, because they’re so used to snow.  Maybe that has gotten old for them.  What do you want me to say?  We have the best fans in the NFL, I can tell you that.”

Way to suck up to the locals, Coach.  I’ll give Harbaugh this… he knows what plays here.  And I bet it was those really good fans that were calling for your quarterback’s head, round about the middle of last year… right before he went on a tear and lit up the playoffs on the way to a championship.

I’ll tell you this… I guarantee that if someone wearing the opponent’s jersey is throwing snowballs at the Raven players, the ushers bum-rush him out of the stadium so fast it makes a sonic boom.

Later, Peterson took to Twitter again to sharpen his statement: “You just enjoying the game & the next thing you know ur hit in the face with a ball of ice, correction, not snowballs, ICE BALLS.  Not funny or fun, that’s all I’m saying, it wasn't cool.”

No, Coach Harbaugh, your Best Fans in the NFL weren't lobbing nice fluffy snowballs, like in the back yard of some idyllic youth, these were hard, heavy chunks of ice being flung from a great distance.  You could call that “assault.”  And if it were the other way around, you’d be screaming bloody murder.  Ray Lewis would probably call it a conspiracy and blame the league office.

As far as I’m concerned, this is just one more instance of a bush-league organization, who pays lip service to providing an enjoyable game experience, but does nothing to ensure even the basics of spectator safety.
Posted by bluzdude at 7:22 PM

I've given up on football this year. Giants suck. Eli Manning is attempting a horrible looking beard. Try again next year.