What Freedom of Speech Actually Means

I really need to stop scanning through Facebook posts; it never fails to make me sorry I looked.  I hate seeing people I like and respect expressing support for ridiculous memes and graphics.  I lament the loss of critical thinking on a daily basis.

The latest offense to common sense is this whole “Duck Dynasty/Phil the Patriarch” commotion, wherein the aforementioned dipshit threw out a bunch of ignorant and offensive statements in an interview with GQ, denigrating gays and African-Americans. 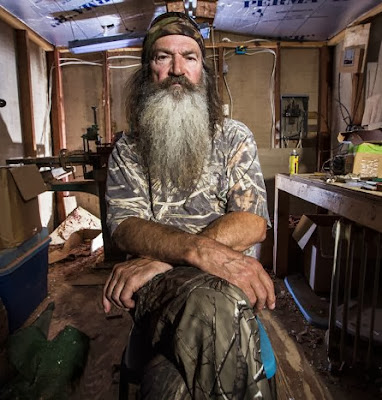 Shouldn't he really be interviewed by Field and Stream?

In recent times, whenever someone says something irretrievably stupid, the people that generally support the speaker immediately begin trumpeting about free speech and the speaker’s right to express himself.

This brings me to my newest passage in the Book of Bluz: “Whenever people can’t defend the content of a statement, they enthusiastically espouse the right to state it.”  So when you hear the Freedom of Speech argument trotted out, just remember that it’s all they have.  If they could defend the content and win, they would.

That’s also a featured part of the modern media playbook… if you can’t win the argument at hand, change the argument.

Freedom of speech is not at issue.  The guy made his statement, and was free to do so.  Freedom of speech does NOT, however, guarantee that he gets a TV show to speak on.  TV shows are market-driven.  Once a commodity begins costing a network money, all bets are off.

Networks are interested in two things: eyeballs and dollars, wherein the former begets the latter.  If someone threatens either one, changes get made right quick.  So Phil gets put in the penalty box until the heat dies down.  That’s the thing with the freedom to speak; you are also responsible for what you say.  If you say something asinine, there will be consequences, especially if you’re in the public eye.

Actually, he’s probably getting off light.  If an unknown like me ever said what he said in a national magazine, I would be fired from my job before the ink was even dry.  Phil gets to lay low and count the money in his mattress for a few weeks.  He’s golden.

It’s just funny because the conservative rap is always for people to take responsibility for their actions.  Apparently that’s only for “other” people, like criminals or unwed mothers. 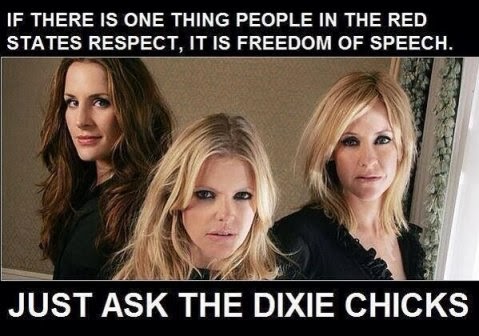 Naturally, conservative politicians are falling all over themselves to defend this guy, with the usual suspects/media whores Ted Cruz, Sarah Palin and Bobby Jindal leading the charge.  As usual, they don’t make any more sense than Phil did, as they trot out the same old logical bait and switch.

“If you believe in free speech or religious liberty, you should be deeply dismayed over the treatment of Phil Robertson. Phil expressed his personal views and his own religious faith; for that, he was suspended from his job. In a free society, anyone is free to disagree with him - but the mainstream media should not behave as the thought police censoring the views with which they disagree.”

Note to Senator Ted: Phil was not sanctioned for his religious beliefs.  What part of religion indicates that African-Americans were happier under Jim Crow laws?  No, he was sanctioned for making ugly, racist, homophobic statements that don’t belong in civilized society.  He was not censored in any way (Dude, look up the word “censored”). He made the statement and now he is obligated to take the blowback.  That’s how free speech actually works.

Also, obnoxious, factually and historically inaccurate statements under the guise of “religion” are still just as wrong.  Talking nonsense and calling it religion is not a Get Out of Jail Free card. 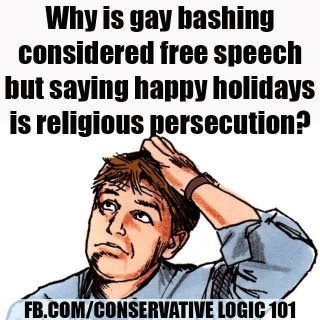 Bobby Jindal expressed dismay that Phil was sanctioned while MTV took no action against Miley Cyrus.

I thought Republicans were supposed to know something about how business works.  Hey Gov, MTV didn't lose diddley-squat over Miley Cyrus and her tongue and her sad little hiney.  They gained eyeballs and attention.  They have no reason to punish Miley Cyrus, as she paid off in spades.  Or at least in dancing bears.

Not to mention, how is any form of dancing as offensive as suggesting an entire race of people was better off living in filthy, inferior conditions?  Or risking getting beaten or hung, just by walking down the wrong street?

In a logical flaw the size of the Grand Canyon, old Phil suggested that because the black people he worked with seemed happy, then they all must have been better off without all those pesky civil rights.

OK.  Then it follows that because when I went to England in the mid-70s, I didn't see any IRA bombs explode, so they must not have been very dangerous.  And because I didn't see the Challenger explode or Neil Armstrong walk on the moon, neither one of those happened either.

Idiot.  Perhaps Phil should have gotten out more.  Then maybe he could have seen a lynching, or fire hoses and billy clubs turned on people who just wanted to go to school.  Maybe then it might have sunk in that some people weren't having a very good time of it.

So now we have another conservative “martyr,” pilloried by the evil left-wing mainstream media and egg-headed liberals.  And we have politicians who boil the controversy down to “Simple Man Punished for Being Religious,” and get people to post their support on Facebook.

And you wonder why I have such low regard for the American public…
Posted by bluzdude at 9:58 AM

I blame cable TV. There are more channels than there is quality content to put on them. In my opinion, reality TV is irrelevant unless people are: On an island, running a race around the world, or cooped up together under 24/7 internet surveillance.

I'm with Valerie. The fact that anyone's even listening to what the star of a reality TV show has to say about anything in the first place is scary in itself.

Also, you hit the nail on the head. I can go march out in the street screaming that I hate minorities, and because of that, my employer can fire me. Why? Because they don't want the racist crazy person representing their company. That's their right. Just as it's my right to say those things if I really want to. But saying those things doesn't mean I'm magically exempt from any and all repercussions.

Personal Responsibility: The Number One priority of Republicans... unless they have to take some, themselves.

This show is filmed an hour and a half from where I live, so as you can imagine it's really shaken up every single person I know. I swear if I see one more thing about Phil on my FB feed I'm going to puke. And seriously, doesn't our governor have more important things to do than comment on a TV show? Or maybe he was just frantically trying to convince A&E not to cancel the show so we wouldn't lose that tax money.

Ah, so THAT explains Bobby J's interest in this mess... tax dollars without having to really "tax" anyone.

Thank you, Jessica, for demonstrating that Louisiana has more than hairy rednecks, crazy cajuns and fanboats.

I could give a shit what he says. He's clearly an idiot. I was so irritated, too, by facebook. People all of a sudden are all one side or another. I was neither side. He said what he said, and it didn't surprise me one bit. Who would it, really? He's a self proclaimed redneck and proud of it. I'm proud of the fact that he didn't say anything worse.

I give less than a fuck what he had to say. I'm just disappointed that so many people agree with him, or can't critically analyze the situation well enough to separate the hate from the spin.