Watch Out for Those Old Ladies

I was talking with a friend and she was telling me about her fears for the future.

Friend: I always told myself if I didn't find a good man, I’d just go live in a convent.

Friend: OK, maybe not a convent… Maybe I’ll start a farm for old women that are sick and tired of men.

Bluz: Like a “Crone Farm.”  [Uproarious laughter at his own joke]

Friend:  Yeah!  Like, we could make sweaters and art and stuff…

Bluz: But you’d better make sure none of them wandered off… you’d have to put up some “scare-crones.”  [More uproarious laughter at the mental image.]

I know; a pun is the lowest form of humor… unless you think of it yourself. 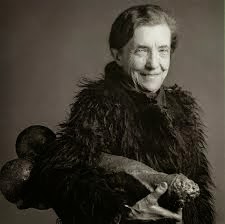 Right… you gotta watch out for the old ladies, because they don’t get to be old ladies without learning how to be crafty. Which reminds me of a story…

A farmer stopped by a local mechanic shop to have his truck fixed. They couldn't do it while he waited, so he said he didn't live far and would just walk home.

On the way home he stopped at the hardware store and bought a bucket and a gallon of paint. He then stopped by the feed store and picked up a couple of chickens and a goose. However, struggling outside the store he now had a problem - how to carry all his goods home.

While he was scratching his head he was approached by a little old lady who told him she was lost. She asked, 'Can you tell me how to get to 1603 Mockingbird Lane ?'

The farmer said, 'Well, as a matter of fact, my farm is very close to that house I would walk you there but I can't carry this lot.'

The old lady suggested, 'Why don't you put the can of paint in the bucket. Carry the bucket in one hand, put a chicken under each arm and carry the goose in your other hand?'

'Why thank you very much,' he said and proceeded to walk the old girl home.

On the way he says 'Let's take my short cut and go down this alley. We'll be there in no time.'

The little old lady looked him over cautiously then said, ‘I am a lonely widow without a husband to defend me. How do I know that when we get in the alley you won't hold me up against the wall, pull up my skirt, and have your way with me?'

The farmer said, 'Holy smokes lady! I'm carrying a bucket, a gallon of paint, two chickens, and a goose. How in the world could I possibly hold you up against the wall and do that?'

The old lady replied, 'Set the goose down, cover him with the bucket, put the paint on top of the bucket, and I'll hold the chickens.'
Posted by bluzdude at 6:19 PM