Gravity: You don't miss it until there isn't any.

I was off on Monday for MLK day, so I took myself out to the movies.  I went to see "Gravity" before it left all the theaters.  As it was, it was only showing at one of the places in my area.  From everything I heard about it, I figured I needed to see it on a big screen, in 3D.

And after having seen it now, everything I heard was right.  The 3D effects were amazing.  I mean, honest to God, when the shit started blowing up and flying around, it felt like I was right in the middle of it.  Seeing this movie on TV, no matter how large or clear the screen is, just won’t be the same. 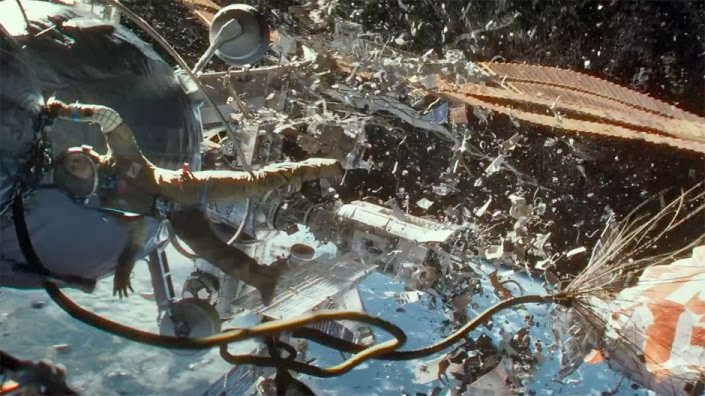 For a movie without monsters or psycho killers, it was still pretty terrifying.  I mean, how scary is it to be torn away from your ship and left alone to drift out into space and die?  It’s one thing to hear about it in a David Bowie song; it’s another to feel like you’re along for the ride.  The fact that you’re riding along with the Hollywood coolness of Sandy and George only helps so much.

The only gripe I have doesn't really involve the movie, just the theater.  I mean, if you’re going to show a totally immersive 3D movie, and warn everyone to turn off their phones, the least you can do is turn off the fucking house lights when the movie starts!  Nothing kills the isolation of space like a bunch of spotlights shining down on the audience.

Finally, after about 3-4 minutes, someone got up and told them about it, and they killed the lights.  (Someone should have bought that dude an overpriced Coke.)

They showed the film in one of the smaller, fancier theaters.  The seats were like a series of easy chairs, paired off by twos, with foot-wide tables between the seats and in front of every other row.  Kinda sucks if you’re there with an odd-numbered group, but regardless, I definitely approve.

I still don’t have the answer to my 3D question, though.  As I mentioned in my post about the history of my vision correction, I have contact lenses that work around my need for bifocals.  The lens in my right eye is prescribed for distances, and my left, for close up.  Now, the 3D effect plays on the perceptions of both eyes, so I figure if I wear my usual contacts, I’ll get a blurry image, because anything viewed from my left eye will always appear blurry.

I asked the people at my eyeglass place about it, but they couldn't give me an answer.  (The doctor was out.)  They told me no one had ever asked about that before.  In fact, they told me to report back to them if I find anything out.

Well, I didn't find anything out because, for this trip, I replaced my left contact lens with one of my old lenses that were prescribed for a longer distance.  If they want to pay for my ticket, I’ll be glad to give my current prescription a try and report back.  But I’m not paying $12.50 (for a matinee!) to watch a movie with blurry 3D.

Anyway, if you haven’t already seen it, and are at all interested, I give Gravity a hearty recommendation.  Go see it before it disappears to the DVD bins.

Update from January 2020
I saw the new Star Wars film a couple weeks ago and I accidentally bought a ticket for a 3D showing. I hadn't worn my all-distance contacts; I was in my usual left eye for close-up/right eye for distance lenses. It wasn't until the previews started and looked all blurry that I realized that I was in a 3D theater. But after going back to the lobby to grab some 3D glasses, I learned that I shouldn't have worried about any of that stuff in the first place. I could see the 3D effects just fine with the mismatched lenses. Classic case of over-thinking it.
Posted by bluzdude at 5:29 PM

I want to see the movie in the theater now that I read your post. We have been on an Oscar movie binge (consisting of seeing two nominated movies in two weeks). We saw August: Osage County and American Hustle. August has a superb ensemble as does American Hustle but it's a darker story. Nonetheless Meryl Streep's performance is just amazing and I'm surprised she has not won any of the awards for best actress. Julia Roberts also is incredible.

We also saw Lone Survivor and it was very intense. I then read the book and was really amazed. There is a lot of personal politics in the book and I don't agree with all of the author's opinions but I really respect him and anyone who serves our country in uniform. I think it's definitely worth seeing this movie also.

I can’t see movies like Lone Survivor, because they’re true stories. I can only handle graphic violence if I know it’s a work of fiction. Knowing the true story behind this ordeal makes it too rough for me to watch it play out on-screen. Same reason I never saw Saving Private Ryan. (Yes, I know that was fiction too, but was otherwise true to what happened on D-Day.)