I’ve had this post floating around in my head for a while now, but they’ve been post-blocked by my trip to The Burgh.  Three posts from one trip is pretty good use of my time.  Also, it goes to show how little is going on with the rest of my life.

One thing that’s been rattling around in my cranium is wondering what the hell is going on with the nation’s police force.  All over the country, dudes are getting shot, choked out or broken by police officers.

Earlier this month, the Walter Scott case, (police shoot guy who’s running away, 8 times in the back, after being stopped for a broken tail light), was the candidate to become the next Ferguson.  But it didn’t because this time almost the entire incident was caught on video, which showed the shooting and subsequent planting of evidence to bolster the cop’s initial story.

Because of the video, the cop was arrested, which pretty much stemmed any violent public demonstrations.  But without the video, it would have been just one more uncorroborated cop story where the black guy gets killed.

So with yet another such story dominating the news cycles, you would think that police forces would start to get the message, that they can’t use citizens (even our possible criminal citizens) as target practice.

But still, the stories keep rolling out.  Right here in Baltimore, a guy died after having his spine 80% severed at the neck after he was taken into custody.  (The charge: running away upon seeing some cops, and having a knife clipped to his belt.)

Taken all together, this tells me just how deeply ingrained it is with our police forces, to view black men as criminals; judged as sub-human for no other reason than that they’re black.  Even with all the heat; all the publicity going on over these incidents, they keep happening over and over again.

How routine is it to plant, move or adjust evidence to back up a false story?  And here, I thought that was something that just happened in the movies and on cop shows.

I’m really not trying to impugn all cops with this stuff.  I know it’s not universal.  My cousin is a cop, and I don’t think he’s like that.  But I’ll bet you he knows some guys that are…

I know it’s a dangerous and often thankless job, and they put their lives on the line for us every day.  But something is seriously wrong, when a cop thinks it’s a good idea to open fire on a guy who’s trying to run away from a traffic ticket.  His life was just that cheap.

In a previous post, I called out for judicious use of cop cams.  That way, as long as the cam is activated, (and I would make it a fireable offense to turn it off during an interaction), citizens have recourse from biased, violent, out-of-control police officers, and the cops have recourse from false accusations of brutality.  (Not to mention capturing evidence of suspect’s demeanor or drunkenness.)

If we think cop-cams are too expensive, how expensive is it to repair a town after a riot?  Or to repair the faith of a community in their police force?

Now on to lighter fare…

O No
I’ve gotten out to see a couple of Orioles games already this year.  You might have seen evidence of such on my Facebook or Twitter accounts.  I know it was probably unsettling to my Twitter followers who know me primarily as a Penguins tweeter, but the O’s are running this thing (#OsBirdNest or #Birdland) where you win things by referencing them on social media.  I mean, I’m still a dedicated Pirates (and all things Pittsburgh) fan, but what the hey?  Why not try to win something by doing stuff I’m likely to do anyway?

It was funny though, as I was riding the subway down to the game on Opening Saturday versus Toronto… I hit the Heinous Subway Rider Jackpot.  How I wished I’d brought my MP3 player and headphones…

Guy singing badly with is earphones on: Check.

Fresh gum left on the seat beside me: Check.

By the time I got to the ballpark, I was relieved to only have to deal with the drunks.

After pounding a few beers at The Bullpen, I went over to the ballpark early, so I could receive their give-away: 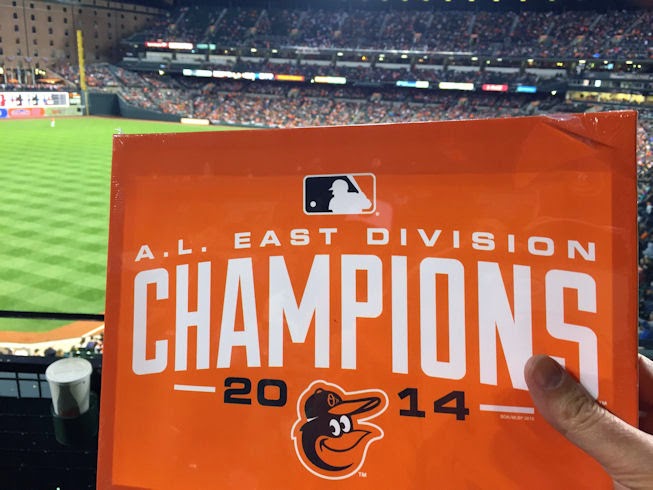 I was kind of disappointed.  Was this really the best they could do?  It looked like something whipped up on MS Paint, circa 1999.  I assume they didn’t use a photograph as a base, because the stark 4-color treatment was cheaper.

I think they should have used something like this… 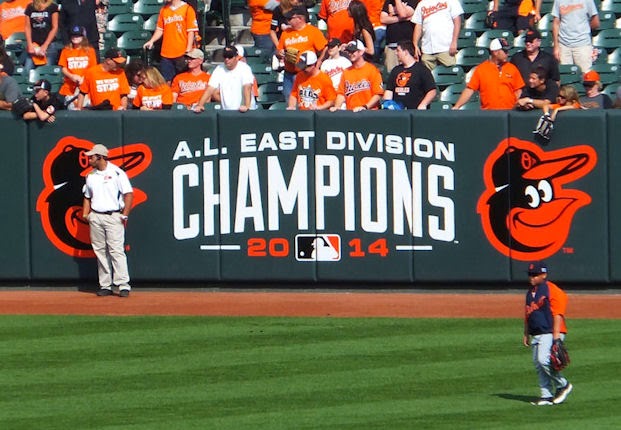 They’d just need to move those dudes on the left out of the way.

Anyway, as I was cruising around the club level, I wandered into their Collectibles shop, that featured various signed or game-used equipment.  One thing they offered was a broken Chris Davis bat, for $1500.  I’d have taken a picture but I was too busy spit-taking.

For $1500, I’d expect Chris Davis to come to my house to give me batting lessons.  And move some furniture. 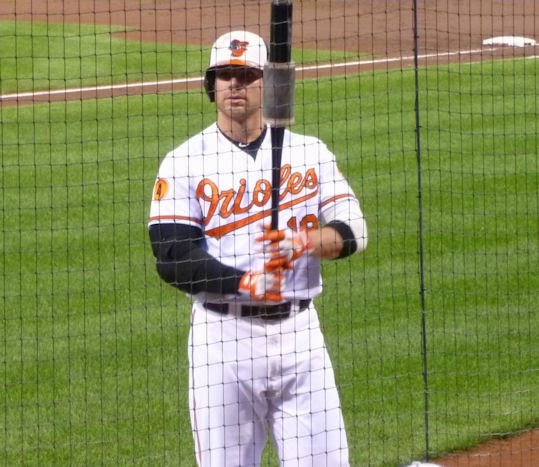 "Hey Chris, can you give me a hand with this sofa?"

I also went by the case that has the last two Orioles World Series trophies. 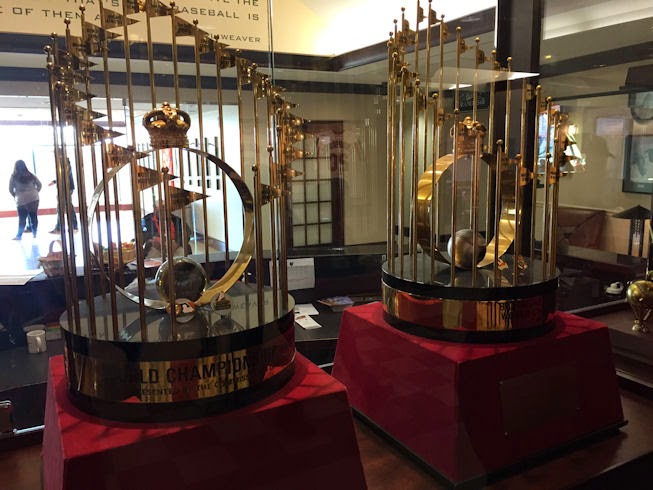 The following Wednesday, I went back for another game.  The Yankees were in town, and because it was mid-week, it wasn’t designated as a “Premier” or “Price Gouging” game.  So it was a good opportunity to go and boo Alex Rodriquez for being an obnoxious steroid monkey.  Of course, he got even with my ass by smacking a home run. 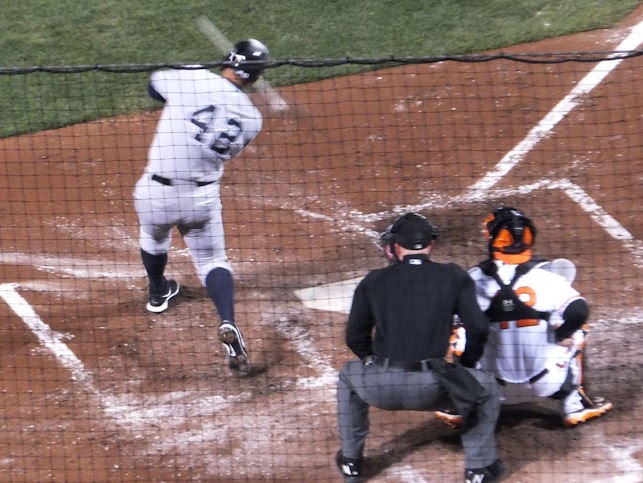 This time, I sat in the first row of the upper deck, right behind home plate.  When you’re only looking for a single ticket, sometime there are some orphaned seats available in prime locations.

I was hoping to get a panoramic shot that was worthy of putting on canvas.  Best case scenario would be a nice, sunlit shot with creeping shadows, but alas, it was a cloudy day.  But night shots aren’t bad either.  You think this would make a good frame-able shot, or should I come back on a sunny day? 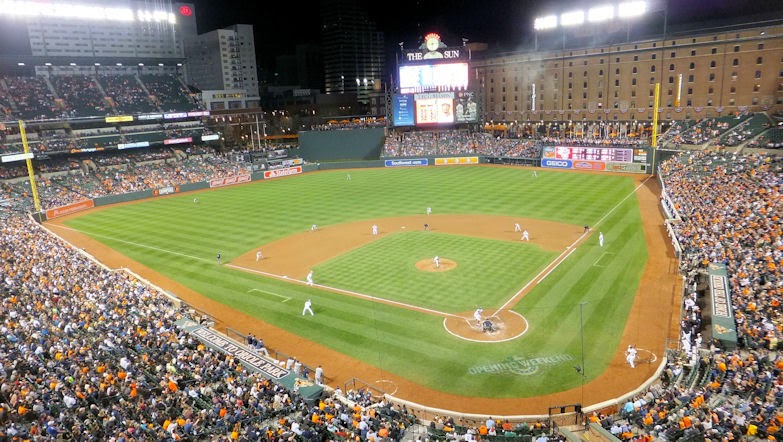 The O’s won this game too, which features homers by Manny Machado and another one from Schoop.  But the best part might have been our big reward.

Someone in my row won pizza for the entire row.  I was in the bathroom at the time when I heard them announce the row, and I was like, “Hey, that’s my row!”  I had been considering trolling around for something to eat, so instead, I beat feet back to my seat, to take advantage of this cheesy bounty.  Out of the 120 or so games I’ve been to, this was the first time I ever was a part of a winning row or section.

Now I just have to figure out what that lady did to win the pizza.  I would love to be Pizza Provider for my row.

None for Yankee fans though.  They have enough dough as it is.
Posted by bluzdude at 6:37 PM