I originally planned to include this story in the last post, but cut it for length considerations.

It kind of started at dinner with my blogging friends.  Cassie was telling stories about all the famous Pittsburgh athletes she met back when she was waiting tables.  My favorite was when Penguins’ goalie Marc-Andre Fleury was a rookie, he came into the place where she was working.  She had no idea who he was… in fact she went back to the kitchen and started to tell her friends about the really cute Canadian guy at her station, with nice teeth.

Maybe if she had played her cards right, she could have been Mrs. Flower by now. 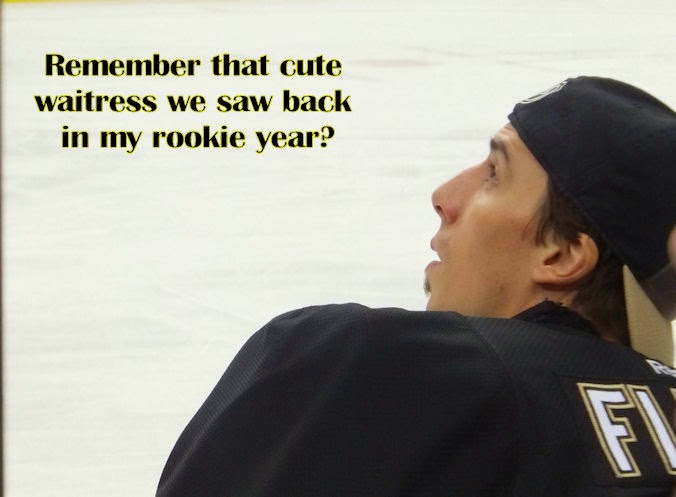 So the next night, I forget how it came up, but my cousin Greg told us about his brush with fame.  (Greg, I hope it’s OK for me to pass it on here, because it’s too freakin’ cool to not tell.)

We both have another cousin, Jeff, who a number of years ago, dated a woman who was best friends with the wife of Penguins player/owner/savior/legend, Mario Lemieux.  Every so often, he’d go along when his girlfriend went to visit the Lemieux family.  The women would talk and he’d hang out with Mario, drinking wine and smoking cigars.

Sometimes, when I’d be staying with my aunt and uncle (Jeff’s parents), he’d come home late and we’d stay up and talk, after everyone else was in bed.  He told me a lot about what it’s like to hang out with Mario.  I mean, my head was practically exploding from the vicarious thrills.

So, Greg tells us that one night, he gets a call from Jeff, inviting him to a party.  He didn’t say where; he just sent him the address.  Greg went “as is,” in a tee shirt and jeans.

He knew something was up when the address he was directed to was a freakin’ mansion. 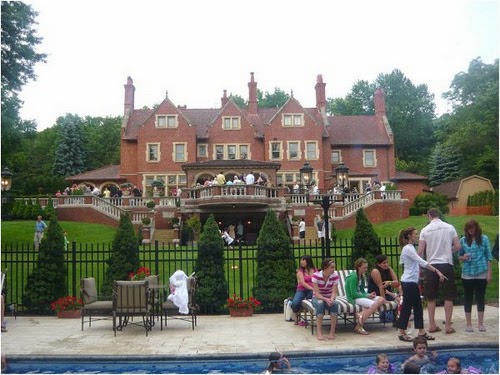 Yes, this is the one.

I’m not sure how he got in, but he met up with Jeff and found himself among a small clutch of dudes hanging out in a wine cellar with Mario himself.

Director’s DVD Commentary: I don’t know how the destination came as a surprise… I’m sure the address had to be something like 66 Le Magnifique Way.

Greg sort of stayed off to himself, watching the scene from the sidelines.  I mean, it was like being in one of those Bud Lite “Are you up for anything?” commercials, but with better drinks and a much better celebrity.

As people began to move off, Mario took note of Greg, standing there with a look of stress and amazement on his face.  He went over to him and said, “Let’s get this out of the way.  Is there something you’d like to say to me?”

I’m telling you, I’m getting shivers as I type this, because as cool as I think Mario is, it’s even cooler that he realizes the effect he has on people, especially lifelong Penguins fans.  He has the kind of presence make grown-ass men become dumbstruck.  But he was like, “I get this all the time.” Greg went silent for a bit, collected his thoughts, and then said, “Thank you for saving the only hockey team I ever cared about.”

And with that, they moved to rejoin the rest of the party.

It’s more or less exactly what I would have said, if I were in his place.  Just, “Thank you for everything you’ve done for Pittsburgh, hockey, sick children, and hockey fans everywhere.” (And I had considerably more time to put that together.)

So… Stanley Cup Playoff hockey commences this week.  I guess that means I’d better figure out what I’m wearing.

As usual, I tracked my game jersey mojo throughout the hockey season, to find out which ones were most effective.  Unlike past year, there’s no clear favorite.  Perhaps the magic is wearing off, and it’s time to start going with t-shirts.  But here’s how it shook out:

The jersey with the best winning percentage was the “Snoop Dogg 66.” 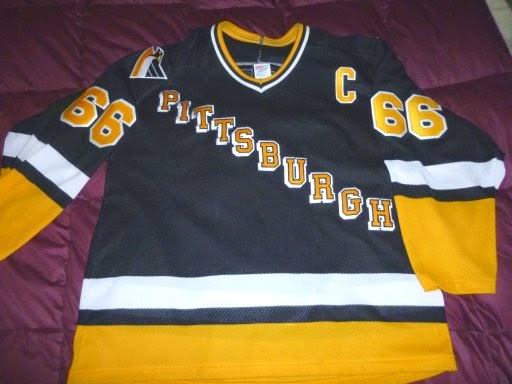 It’s hard to really count that one because I only wore it four times. Before crowning a #1 Seed, I like to have a little bigger sample size.  So with that, I see this as my front runner: 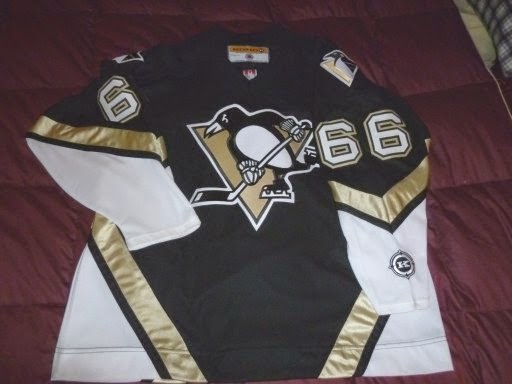 It’s still not great, but like I said, no single jersey really had an effect, unlike in years past. 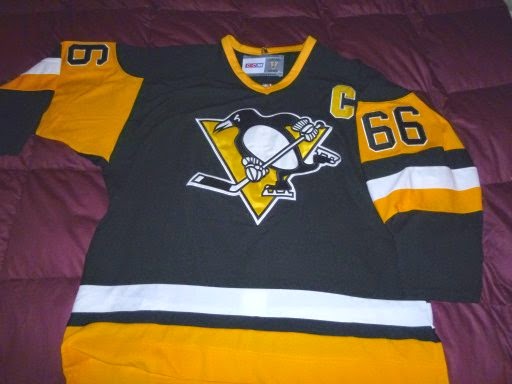 The Penguins used this one as their “3rd jersey this year, in a break from their previous blue ones.  Everyone really seems to like the way they look on the ice.  All I can say is that I wore the jersey every time the Pens wore it, and they didn’t break .500.  Not good mojo. 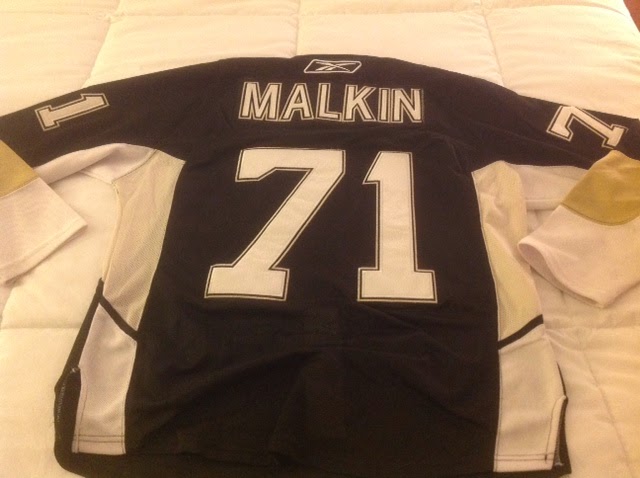 Geno seemed to be hurt for a lot of the season, so I didn’t wear his jersey on nights he didn’t play.  But when he did play, he was definitely “score.”

Moving on to the away jerseys, this year I again used my white Sidney Crosby jersey as the workhorse. 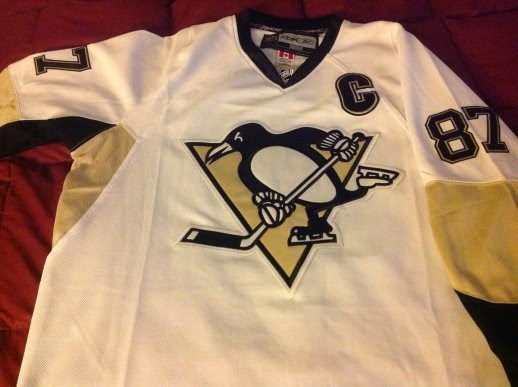 Not a lot of magic there, but then the Pens were pretty bad on the road.  That can’t be all my doing.  As a switch-off, I used the first Winter Classic jersey for away games. 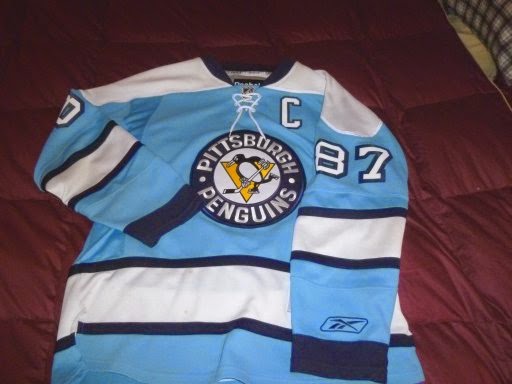 Might be an option if we need a big win as visitors.

Blue Penguins hoodie: (worn mostly over Christmas when I had a cold and felt like shit), 6-2, .750.  Good record, but it may be too warm for a hoodie, come playoff time.  I may pull it out if nothing else works.

And lastly, while wearing no Pens mojo at all, (like Saturday night when I was at the Orioles game), 2-1, .666

Director’s DVD Commentary: For an outstanding article and a look at why Mario Lemieux is such a big freakin’ deal, on the occasion of his being named Pittsburgher of the Year for 2012, access this link to Pittsburgh Magazine.
Posted by bluzdude at 8:01 PM