And Then, Baltimore Just Blew Up

I was actually going to write about some other stuff today, but the events of the last week have pretty much snuffed that out.

How often is it that you get to see the doors to your place of employment get smashed in on live television?

As you know, the death of Freddie Gray, last week, has been entered into the lengthening list of suspicious (or downright criminal) police-perpetrated deaths.  Since the videos have come to light, citizens of Baltimore have been conducting public protests.

All week long, these protests have been fevered but peaceful pleas for justice. It was like a model of how a community should react to such events.  And then Saturday night, it all went straight to hell.

I was just sitting at home, chillin’… watching TV and switching between the O’s game and a movie on HBO.  Then I got a text from my friend Jenn, wanting to know if I was OK, and wondering if I was at the game.

I responded that I was fine and wondered what was going on.  She let me know… 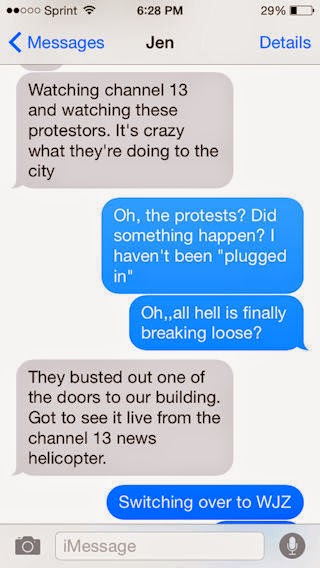 I switched over to the news, and eventually got to see our building get attacked. 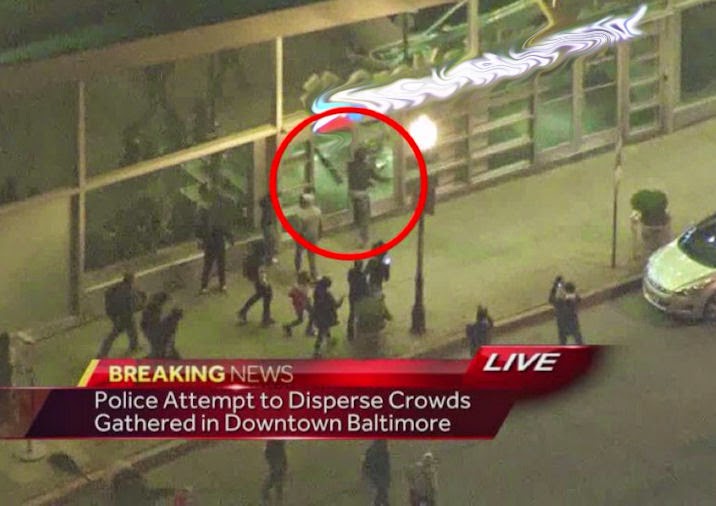 The guy is throwing a cigarette butt disposal pylon through our front door.

Luckily, they didn’t try to enter the premises.  Of course, there is nothing there to loot in a big, empty lobby.

Later, coverage shifted further south, where police were formed in skirmish lines, inching down the street.  Made me glad that I opted not to go see the Orioles game that night.  Finally, my frugal tendencies (in this case, refusal to pay extra to see what the team calls “Premium” games), paid off for me.

At one point, the team was asked to keep all the fans inside the ballpark.  The Orioles made the best of it by blowing a lead in the 9th inning, thus sending the game into extra innings.  By the time they won it in the 10th, the fans were free to go.

But it was weird watching all the chaos taking place right outside the ballpark.  If I had been there, my usual route to the subway would have taken me right into the heart of the conflict.

Sunday passed without incident, but then this afternoon, the “Downtown Partnership” (of local businesses and law enforcement) sent a picture on an email around that chilled everyone’s collective shit. 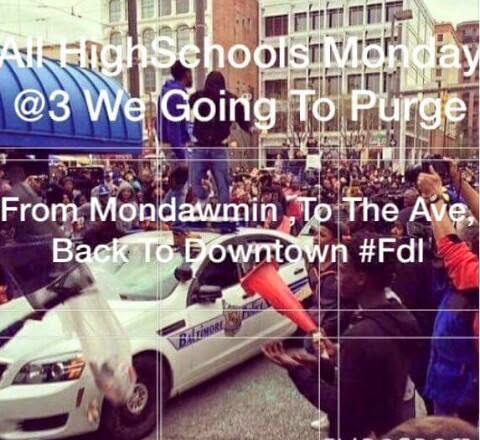 This was supposedly being send around via high school social media.  So what to do?  Stay put and risk the safety of your employees?  Or send everyone home and risk over-reacting.  I was happy to report that our powers that be opted for the position I favored: Getting the hell out of Dodge!

The unnerving part was that the subway line has a stop right at ground zero for this troublemaking; Mondawmin Mall.  We were concerned that some of these rioters might try to come down into the subway to raise hell.

When we pulled into that station, it didn’t appear that there was anything out of the ordinary going on, on the platform.  But we had to look quick because the train never stopped.  The conductor announced that she had been instructed not to stop there.  That was good for me… but not so good for those poor people who needed to get off there.

So I got to spend the rest of the afternoon watching the riot on TV.  Today’s events were far worse than the incidents Saturday night.  Cars were getting set on fire, people were throwing bricks, rocks and bottles at the cops, and a local CVS got looted and is currently on fire (as of 7:00 PM Monday night). 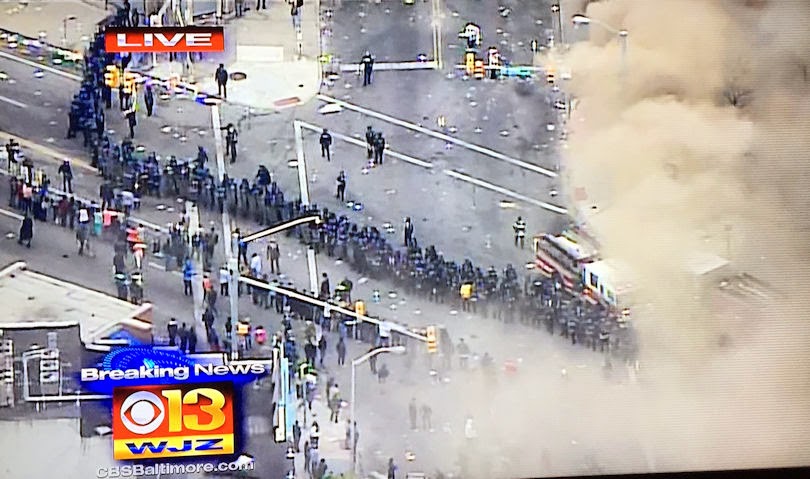 The police form a barrier allowing fire trucks to fight the fire at the CVS (which is obscured by smoke at the far right).

That second, parallel, line in front of the cops was said to be neighborhood leaders trying to stay between the police and the rioters, to de-escalate the situation.  Meanwhile, they just reported that someone cut one of the  fire hoses being used to fight the fire.

What seems to be clear is that this rioting is only tangentially related to the actual protests.  The family of Mr. Gray, (whose funeral was this afternoon), specifically asked that there not be protests today.  But these are punks and troublemakers using the situation as cover to create havoc, puff up their rep, and steal stuff.  And they’re dumb enough to do it in their own neighborhood.  Hey, breaking shit is fun!

Granted, I don’t think they have much choice.  Judging from the TV coverage, they already have police lines positioned all around the Inner Harbor.  It’s like they’re saying, “Feel free to break up your own neighborhood, but you’re not coming near our showplace.”

The Orioles have postponed tonight’s game against the White Sox.  I’ve been planning to go to a game either tomorrow night or Wednesday… I’m hopeful that all this stuff is over with by then.  I really hate when public unrest interferes with my pursuit of leisure activities.  That’s just crossing the line.

I’m not optimistic though.  The Governor just declared a State of Emergency, which paves the way for the National Guard.  I’ll be surprised if we’re even open for business tomorrow.

I am optimistic in the sense that unlike places like Ferguson, there is a level-headed, African-American presence in city government.  The Mayor is black.  The Chief of Police is black, as well as the City Council President and most council members. The Congressional Representative for the downtown district is black.  Their calls for peace will sound less self-serving that if they came from white leaders. Many important voices are appealing for calm, not just in government, but neighborhood elders, church leaders, and whatnot.  Right now, they're conducting a march of elders, asking the rioters to stand down.

So maybe we have a chance.

Jesus, Tony, I feel for you. I lived in L.A. during the Rodney King riots. I wasn't as close to the conflict as you are though. Stay home and stay safe. Hope you're stocked up on beer.

There's a distinct possibility that I'll be working from home tomorrow. It's a real mess out there. But there are some cool heads working to get the situation back under control.

I had heard a little bit about this last week, but I'm not really "plugged in" either--especially on weekends. Didn't realize how bad it was until today....man, I can't imagine seeing my office building being vandalized on live TV. That would freak me out.

It's really shameful that some people will use any excuse to cause trouble - which inevitably takes attention away from the real issue of police brutality and racism, and makes the whole city look bad. Now everyone outside of the beltway will say "This is what they do." ... and you can fill in the blanks as to who "they" are...

My brother in law lives in DC and I've tossed out the idea of catching an O's game or checking out the Inner Harbor while we're down there, but the fam seemed to think it wasn't safe to be in downtown Baltimore (or Philly)...and that was 4-5 years ago Now? Forget it.

I'm glad you ended with a joke about Ravens fans though. That cheered me up. Damn Rat Birds! :-P

That's exactly right. "These People" are not doing themselves any favors, in the eyes of the general public, by going on a rampage. Now when the dust settles, they won't have these stores to shop at, nor will reputable retailers be particularly eager to set up shop.

That said, I think your folks missed the boat on being safe in Baltimore. As long as you stick to the Inner Harbor/Camden Yards area, you're perfectly safe. I mean, I've worked in that area for 17 years... very little happens there that would cause alarm.

I'll tell you what... you want to come catch an Orioles game, I'll be your personal guide. (This week might be rough though...lol...)

and the moral is WEAR YOUR SEATBELT

I saw Ray Lewis pleading with the youth to take the non-violent approach. He is certainly a great spokesperson for that, so I think things will be just fine really soon.

Guess you won't be going to that O's game however...

Yeah, I'll take advice from Ray Lewis on how to be peaceful... right after I hear from Charles Manson.

The O's situation is bizarre. In case you haven't heard, they're rescheduling the 2 postponed games to later in May, playing tomorrow's game at 2:00, with no one allowed to attend, and playing the weekend series in Tampa (instead of here.)

So no, I won't be seeing any games this week. Sad panda...