We finished up at Sharp Edge around 9:30, then the Sitcom Sisters and I hit the Doubletree bar, for a night cap.  But as full as we were, we didn’t stay long, and we adjourned to our rooms for the night.

We met up the next morning at 10:45, and headed over to a restaurant/bar over by the arena, the Blue Line Grille.  Honey Google led the way.

There were plenty open tables, so we grabbed one where I could keep my eye on the door.  We needed to meet up w/ my cousin Greg, not only for “old times sake,” but because he had my ticket!

He rolled in shortly after we did, so we set out to do a little eating and power drinking on the cheap, before going in and submitting to arena prices. 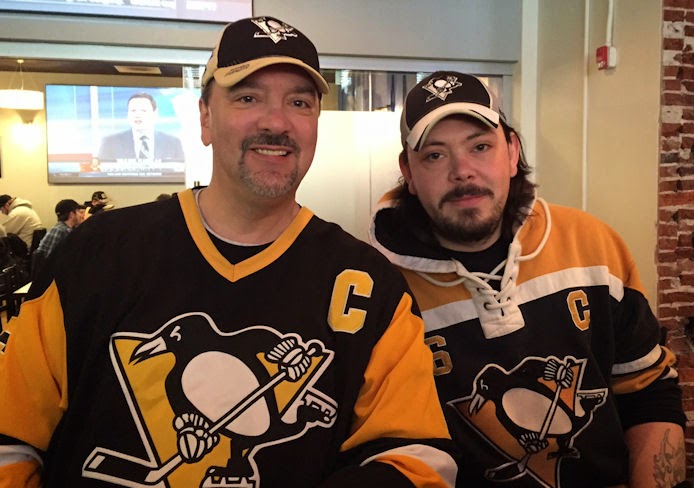 Our family runs black and gold.

My bacon cheeseburger was awesome.  The fries… well, the fries certainly had “body”… 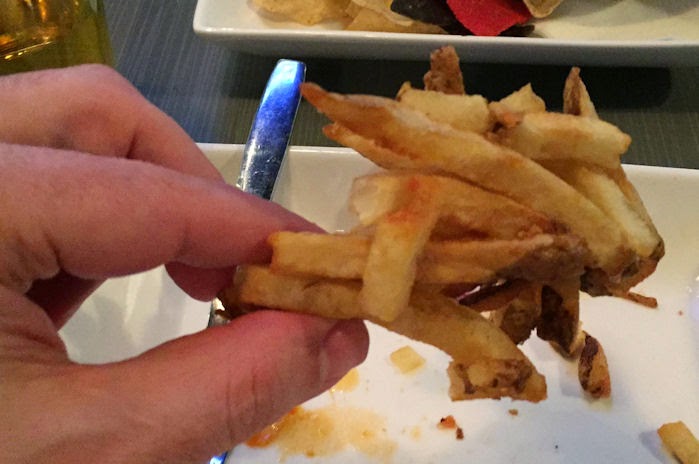 I was pretty excited to get out and get into the arena… Greg’s tickets, (courtesy of his mom’s company) were stellar.  We were sitting two rows behind the Penguins’ bench, right beside the corridor leading to and from the locker room.  I don’t think I’ve ever had better seats than that, for anything.

We got there just as warm-ups were wrapping up, so I just began snapping pictures of anyone who came by, with special attention to Kris Letang, so I could send the shots to Sitcom Kelly to use for wallpaper.  (Not on her desktop, on her actual walls.) 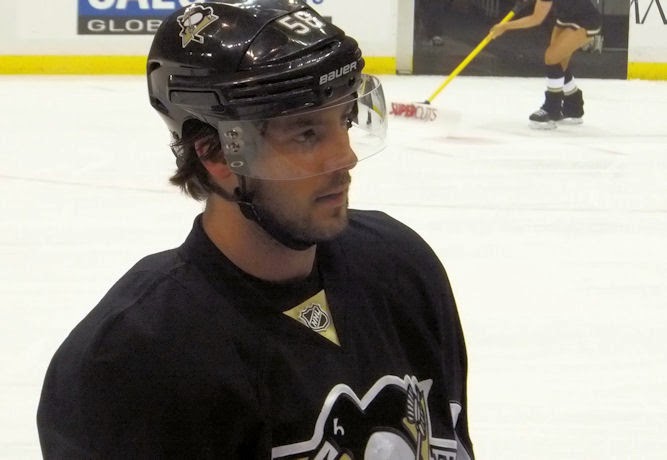 Kristopher Letang, wondering why he feels an eerie chill. 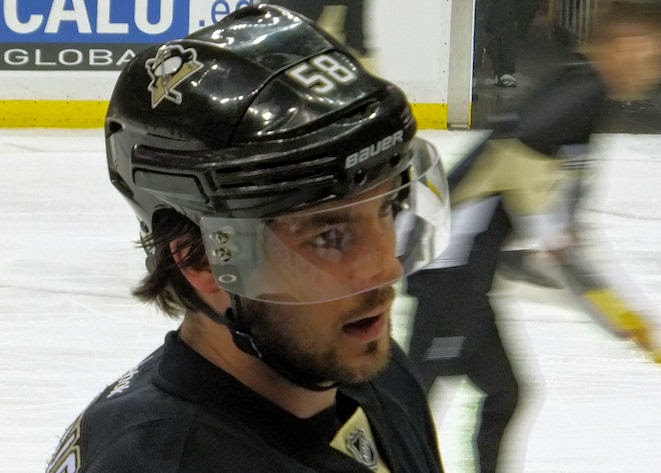 Shortly after this, the only thing Letang will be feeling is woozy. 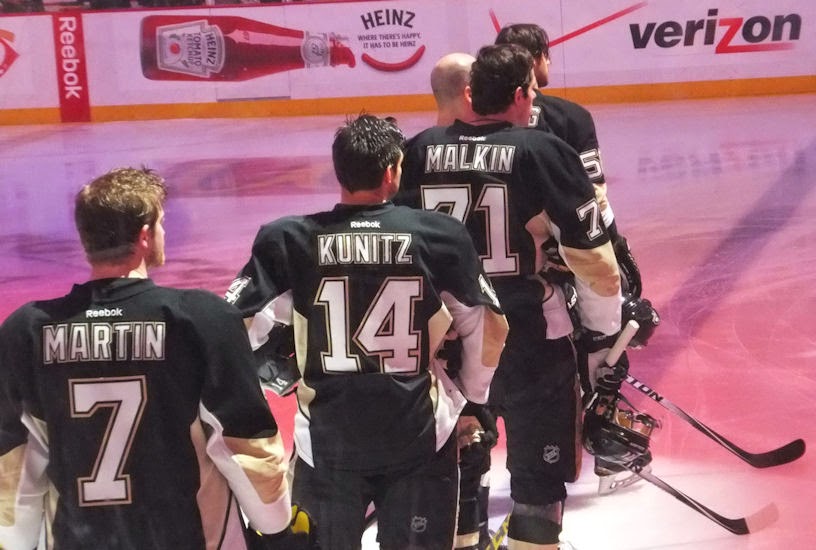 We had to pay attention though… I couldn’t get too wrapped up in taking pictures that I miss a puck come flying at me.  I was perfectly situated to take a puck to the melon, right through that gap in the glass. 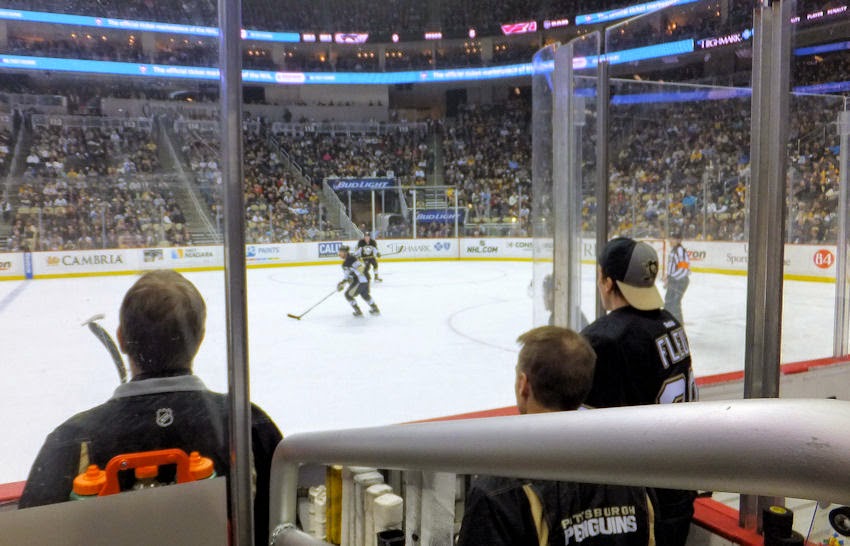 This was a big game; the Pens had been on a losing streak so they needed this win.  Part of the problem was that Evgeni Malkin hadn’t been playing, resulting in a scoring drought.  He even called out his team for their lack of goals. 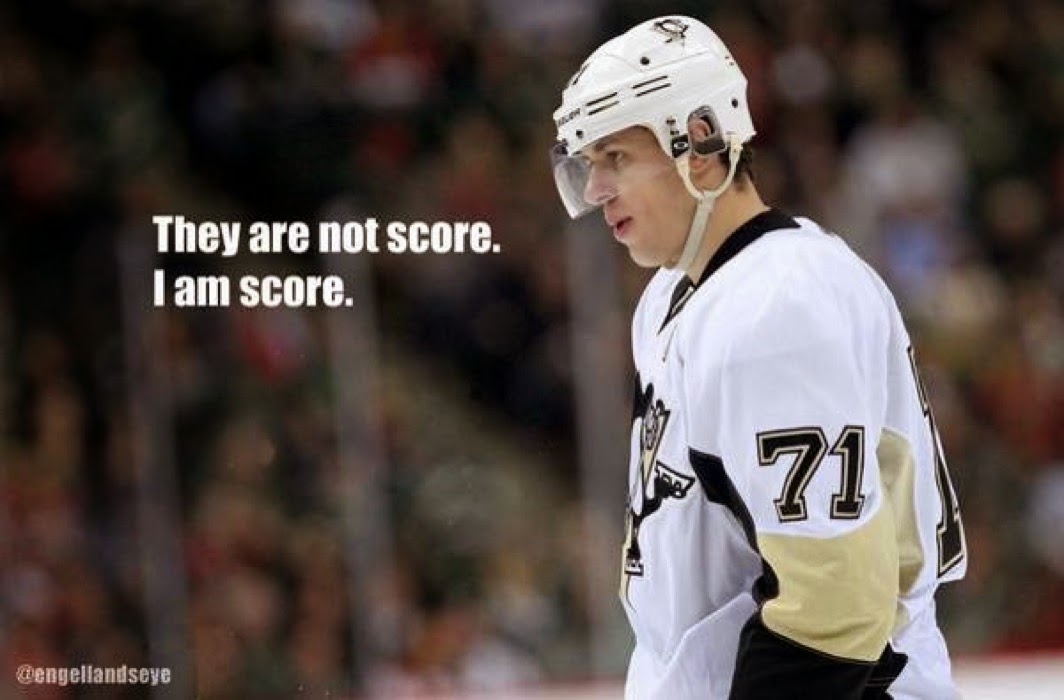 *Not his actual words.

During the game, the second goalie sat right in the tunnel.  The Pens’ primary goalie, Marc-Andre Fleury had started the night before, so he was the backup on this day.  I was so close to him, I could have handed him a drink. 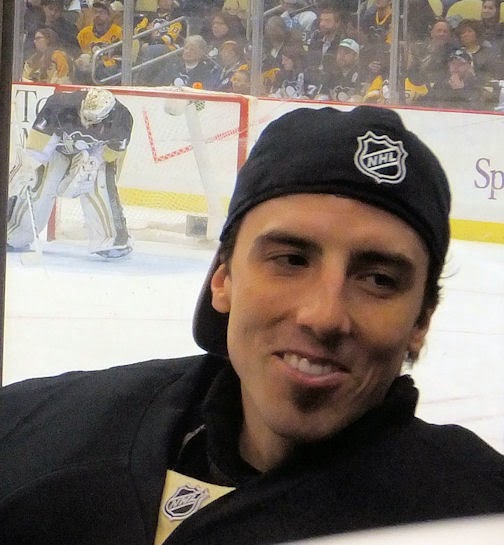 Sitcom Kelly telescoped in on us from their perch in the upper deck. We’re on the far right, and I’m playing with my camera. Or the phone. 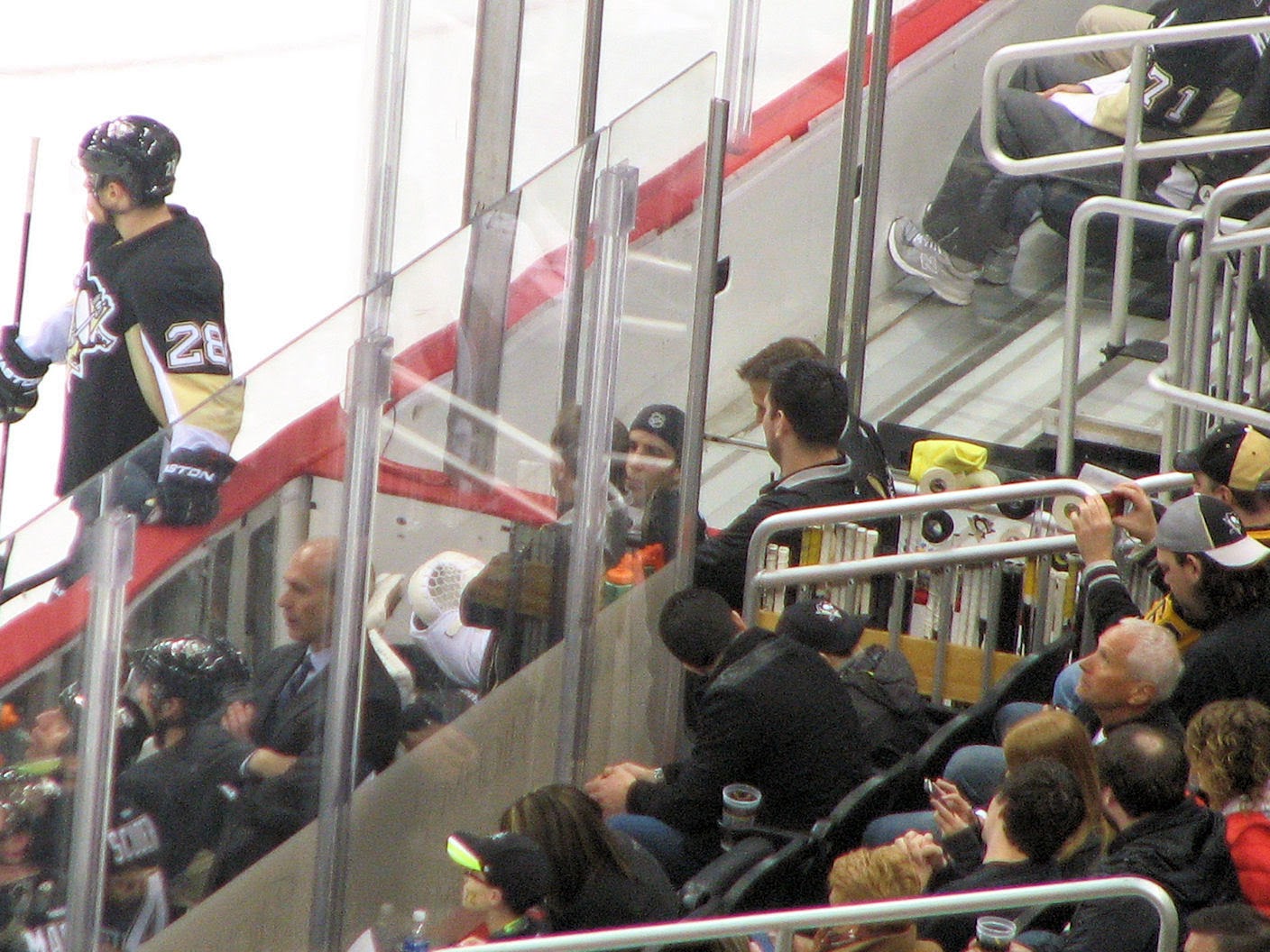 I’m sorry, if you put me right behind the bench, I’m going to have to spend time looking into my camera.  So sue me.

It was a tough game, as hockey games are prone to be.  In the second period, Kris Letang got slammed into the boards, bashing the back of his head.  I didn’t see the hit, but I could tell as he was helped to the locker room, that it was no leg or shoulder injury. I could actually see the birds flying around his head.  I'm sure Sitcom Kelly will take real good care of him, once he gets back into her basement pit.

During one of the period breaks, Greg and I headed up for refreshments: a couple of 24-oz Iron City Lights.  As I stood back at me seat, I realized that I couldn’t be any more “Pittsburgh” than I was at that moment. 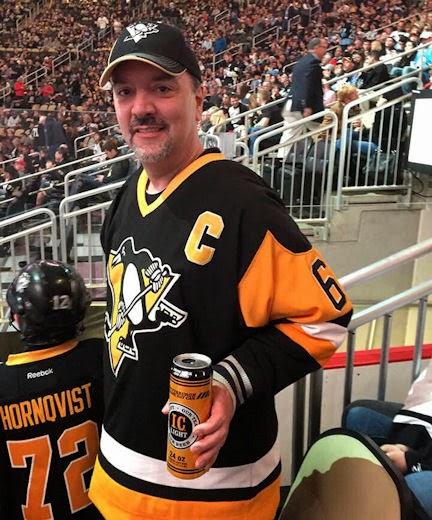 I also stuck my hand through the railing to come up with some shots of the Penguins’ sticks, lined up alongside of me. 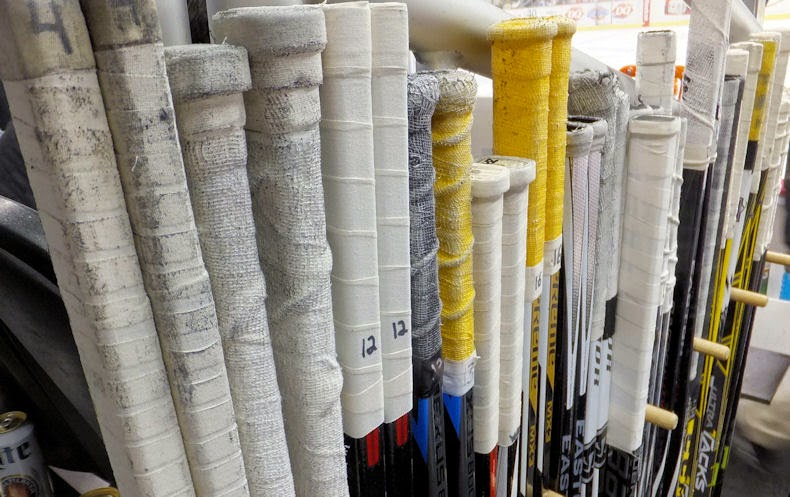 I’ll probably make this into some wall art, at some point.

The Pens won the game, 3-2, and Sidney Crosby was selected as one of the stars of the game. 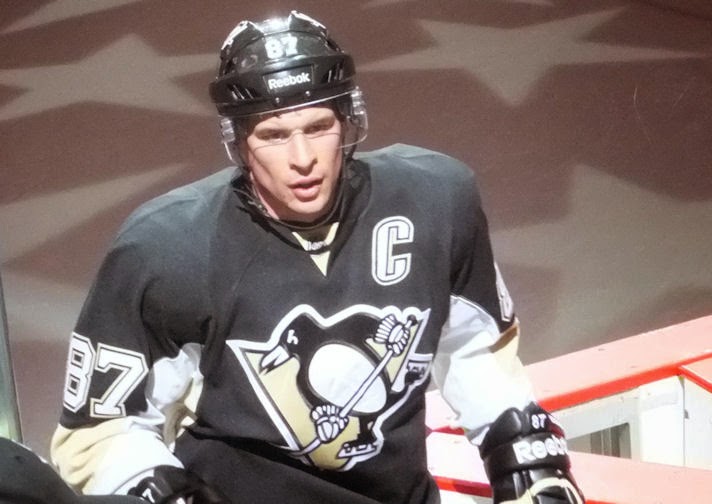 Captain Sid, just about to hand his stick to the kid in front of me.

When the game was through, we rejoined the Sitcom Sisters and went back to the Doubletree to plot our next move.  Greg graciously agreed to chaperone us through the city to our next eating establishment, August Henry.

You know how I always go on about Pittsburgh fish sandwiches?  Seriously, I had the longest fish sandwich I have ever seen. 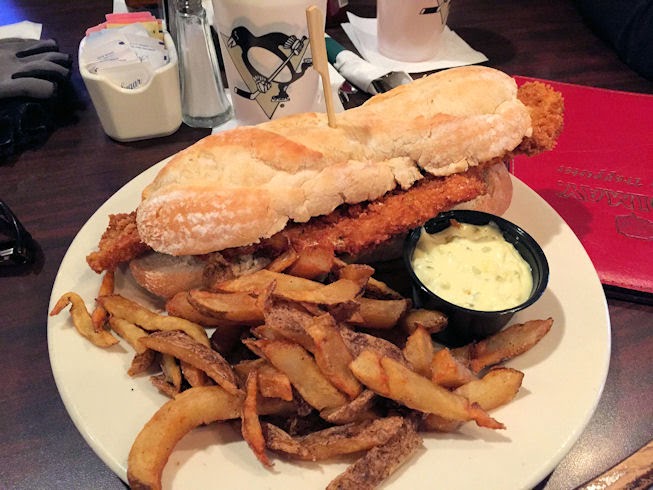 The picture doesn’t do it justice… that plate is about the diameter of a basketball. The bun was at least a foot long, and the fish hung out an inch on either side.

I don’t know how I even finished it. Pure determination, I guess.  Only problem was that when we went to the next bar, I had very little room left for beer.  (Although I did manage a few.)

I don’t know what time we called it a night… around 11 maybe?  The temps were in the teens by the time Greg headed home and we scurried back to the room.  The man did yeoman’s work, shepherding us around town for 12 hours.  I’ll have to thank his wife for letting him come out to play with us all day.

Before we could leave on Sunday, I had a little errand I had to run.  I told the Sitcom Sisters to sleep in and I’d meet up with them around 11, after I ran out to the west side to visit my Grandpa.

He just turned 99 in February, so I couldn’t pass up a chance to see him.  Not many people my age have a grandparent that’s still around. 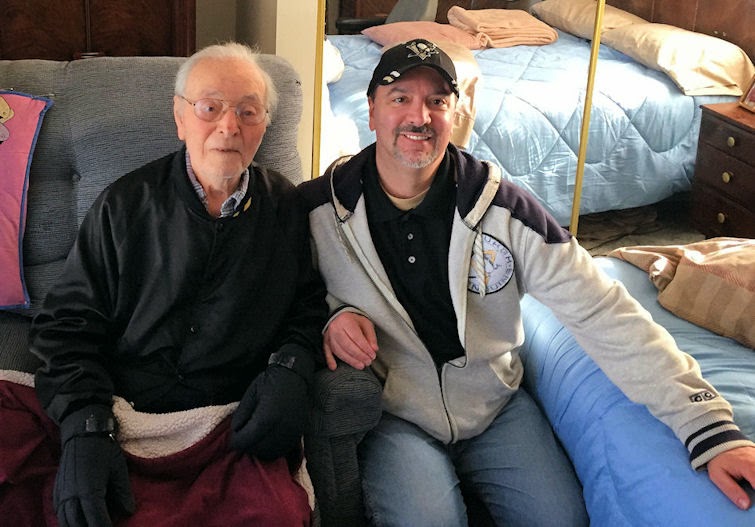 While I was in town, I also had to stop by the local market, to pick up some Pittsburgh delicacies to take back home: fresh-baked Mancini’s Italian bread, and Isaly’s chip-chopped ham. 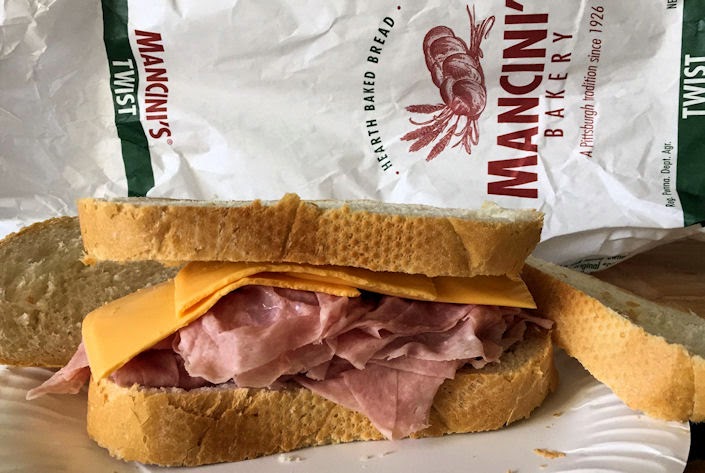 I scored enough for 2 weeks’ worth of ham sandwich dinners.
Whoo Hoo!

I got back to the hotel right around when I’d planned, met up with the Sisters, and we were on the road by 11:00.  We made it home uneventfully, which was nice.

Later that night, I checked out the game via DVR, (after downloading about 200 pictures), just to see if Greg and I made it on camera. 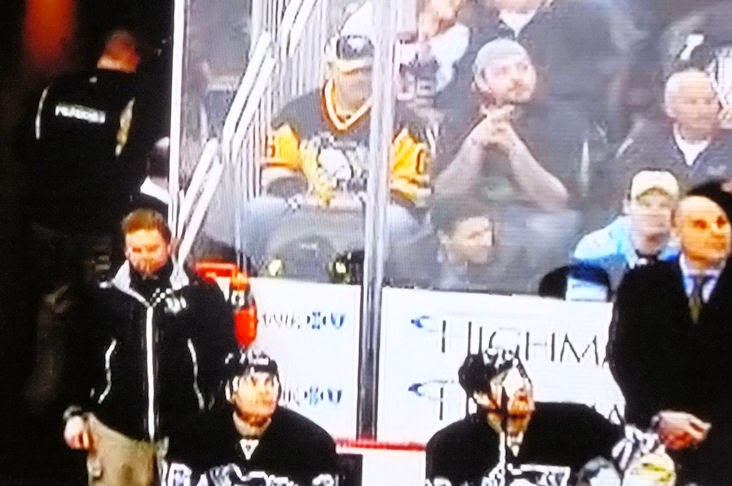 Yep, there we are, larger than life.  I mean really large. Am I smuggling pillows in there, or what?

So, all in all… great trip.  Lovely company, good friends, good food, good drink, lots of sports action, and no one got lost.

Can’t wait to do it again next year!
Posted by bluzdude at 7:18 PM

Email ThisBlogThis!Share to TwitterShare to FacebookShare to Pinterest
Labels: PIttsburgh Penguins, Sitcom Kelly, The Burgh, The Family Business, The Glory of Meat