In his next misapplication of logic, common sense and decency, Donald Trump suggested that he would bring back waterboarding because ISIS does worse things.  He went on to cite examples of Daniel Foley and other hostages being publicly beheaded.

In straight logical analysis, this is another apples to oranges comparison.  The beheadings were meant to kill and terrorize, period.  They were brutal, lethal, public disservice announcements, meant to cause fear and unrest in their target audience.  And I agree, that’s bad.  (And it was with great pleasure I read about the successful drone bombing of the ringmaster of that particular circus.  For a closeted “Muslim,” Obama sure has a lot of them blown up.)

Waterboarding, on the other hand, is an interrogation method, meant to elicit actionable intel from a captive.  It’s brutal, which conservatives seem to like, but it doesn’t really work, which conservatives don’t really care about as long as they’re kicking some ass.  It’s basically revenge, meant to make a primitive segment of our nation feel better about themselves.

It comes down to grade-school level foreign policy, the I Know You Are But What Am I Doctrine.  There are reasons that America is a great country and one of them is that we don’t stoop down to the level of our enemies.  At least we didn’t use to.  I don’t see how our becoming as reprehensible as these ISIS animals helps us or our allies in any way.  Take away the moral high ground, and we’re same bunch of savages, only with better weapons.

It’s always funny to me when people like Trump want to throw out all this bluster and bravado about torture and killings.  I mean, the most discomfort Trump’s ever felt was getting a splinter from the silver spoon in his mouth.  It’s easy for him to talk tough because he has no inkling of what it means to be tortured.  Maybe John McCain can show him.

When you condemn the enemy for his tactics and then adopt a set that are just as brutal, there ceases to be a difference between sides. 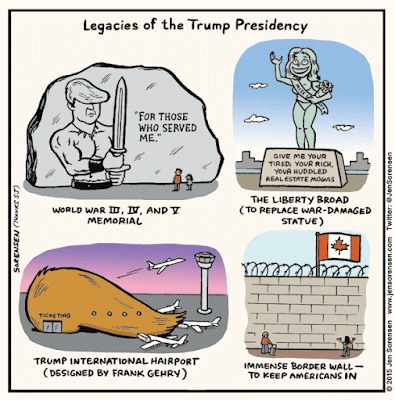 I’ll give Trump credit for this, though… when he’s wrong, he stays wrong.  Did you hear him talking about the Muslims in New Jersey he said he saw, cheering the collapse of the Towers?  Oh yeah, thousands of them, he said, right here in America.  Only problem is that it never happened.

And when it was pointed out to him that it never happened, he doubled down, insisting he saw thousands of despicable Muslims cheering “on the other side of New Jersey, where you have large Arab populations.”

Never happened.  There is not a single frame of that kind of “celebration,” to be verified anywhere.  (Remember, that’s “verified.”  That means when the inevitable xenophobe apologist repurposes demonstration footage from elsewhere and posts it on Facebook, it doesn’t count.)

Snopes had a good analysis of the whole thing, even going as far as to probe the incidence of “false memories” in studies.

I don’t know if Trump has a false memory, or he’s just full of shit.  I suspect he heard about something at the time and over the years has convinced himself that he’s seen it.  He probably does believe it was real.  Maybe he saw a couple of people in footage from other countries, then mixed in his usual dose of exaggeration to come up with the “thousands.”

But when confronted with evidence that there were zero news reports (still) to be found and denials from both police and Muslim leaders that any such celebration took place, you’d think he might go, “Well, OK, maybe not.”

But this is a modern conservative we’re talking about.  They don’t apologize and they never back down, regardless of how wrong they’re proven to be.

And isn’t that just the thing we would want in a world leader?