Praying for Deliverance from the Religious Litmus Test

Ted Cruz thinks a president should begin every day with a prayer.  I agree with him.  And that prayer should go, “Please deliver me from the hurtful things the religious right is going to do in God’s name.  Please give me the strength to keep from strangling Ted Cruz where he stands.  And let there be pecan pie for dessert.  Amen.”

While attending the National Religious Liberties Conference in Iowa, the emcee asked Ted Cruz how important it was for presidential candidates submit to Jesus Christ as “the king of the President of the United States.”  (Apparently that’s the kind of softball question Republicans really want teed up from debate moderators.)

Anyway, Cruz responded, “Any president who doesn't begin every day on his knees isn't fit to be commander-in-chief of this country.”

That leaves a lot of room for interpretation, doesn’t it, especially for those of us with our minds in the gutter?  However, this isn’t that kind of post.

But yeah, we get it.  The President must claim to be a religious man.  Judging from the religious Republican politicians, he obviously doesn’t have to govern by any meaningful religious principles… he doesn’t have to provide for the poor, or take up for the sick or weak, or love his neighbors.

No, according to Ted Cruz and the rest of the political hypocrites, a president needs to pay lip service to religious ideals and then go out and make sure that Defense spending is increased, border walls are put up, tax cuts for the wealthiest citizens are enacted and breaks on health care are removed.  Oh, and also defund the one organization that is doing the most to lower the abortion rate in this country.

I’m uncomfortable with any kind of religious litmus test for presidential candidates.  And apparently so were the Founding Fathers, who wrote “no religious Test shall ever be required as a Qualification to any Office or public Trust under the United States,” in Article 6 of the Constitution.

So there’s not “technically” a prohibition against the non-religious seeking office, but oh yeah, there certainly is a practical one.  People can vote for whomever they choose, and if they choose not to vote for the Godless heathen, that’s the way it goes.  An atheist has zero chance of being elected president, or to any other higher office.  (Luckily, I’m not inclined to run, although the campaign would be one for the ages.) 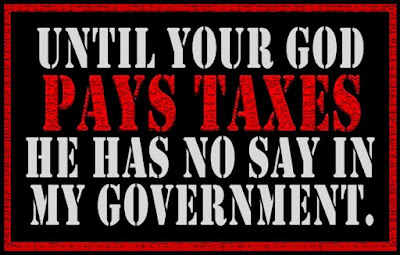 I don’t think religion has any place in government, and to tell the truth, I don’t think Republicans do either.  They just use it as a means to procure votes from people they’re about to screw.  And while doing so, they use propaganda services like Fox “News” to convince people that Jesus didn’t really mean it is easier for a rich man to pass through the eye of a needle than it is to get into heaven.  And what He really meant was that the rich are “the meek” and as so, the ones to inherit the earth.  Or at least get the taxes lowered on their chunk of it.

It makes me laugh when I keep seeing in the news and on the Internet, the tales of “religious persecution” claimed by Christians in this country… the Christians who, by the way, make up about 70% of the US population.  Since when does the 30% persecute the 70%?  I’m pretty sure it’s not religious freedom they’re fighting for; it’s the freedom for everyone to abide by Christian dogma.  I don’t see any of the religious rights people fighting for Muslims, Jews, Buddhists, or any other flavor.

They claim injury any time they’re not allowed to buffalo their faith into the public realm and then call it “persecution.”  I call it pushing back when people assume that theirs is the only valid faith; the national default religion, if you will.

Sometimes I sit back in wonder, amazed at all the strife, the world over, caused by the conflict over which invisible man in the sky we pray to and how and when we do it.

Being a heathen makes things so much simpler, even if I don’t get to be president.
Posted by bluzdude at 6:51 PM