I’m not surprised that the Republicans are orchestrating an organized campaign to push back against CNBC’s tough debate questions.

Sure, on one hand, they appear to be a bunch of spoiled children complaining to their parents because their teachers’ tests are too hard, when in fact, they didn’t study up.  What the presidential contestants refuse to understand is that the job of the debate moderators is to ask tough questions; ones that the candidates may not want to answer.  They are not there to lob softball questions designed provide opportunities for the candidates to repeat well-worn segments from their stump speeches.  And if a candidate dodges or tap-dances around a question, the moderators should call him on it, right then and there. 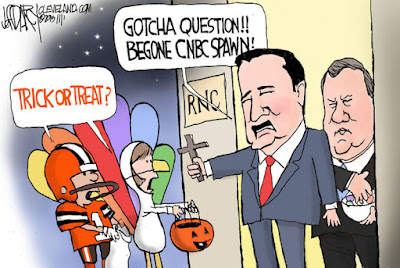 The moderators are supposed to be the stand-ins for We, the skeptical People.

Their complaining is especially galling to me because CNBC asked many of the exact same kind of questions that the Fox moderators did.  But no one (except Donald Trump) complained about them.

I’m not saying they ran the most professional debate… I’m not fond of asking a candidate to comment on something an opponent said while he's standing right beside him.  (Which Fox also did.)  It just strikes me a bit too much like a schoolyard bully getting two lesser bullies to fight each other, for his own amusement.  And I think they should have done a better job in citing their sources when the candidates pushed back.

But I don’t buy the whole “unfair” thing.  They were executing the very definition of their job… asking hard questions of people who want to lead the country.  The GOP complaints seem to me like protesting that your job interviewer didn’t just let you read aloud from your resume.

Now, on the other hand, I see the debate pushback as part of an overall strategy to discredit anyone or anything that dares to contradict the GOP party line.  It’s just like what a lawyer does when the other side’s witness provides damning testimony.  What do you do?  You discredit, you impugn character, you call them biased and untrustworthy.

In other words, you create labels like, “the liberal media.”

While the Republicans have always complained about the alleged “liberal media,” they’ve ramped it up in recent years.  And now they’ve begun to smear fact-checking sites like Snopes and PolitiFact.  It’s just another way of stacking the deck.

When there’s an entity researching their claims and pointing out the falsehoods, exaggerations, half-truths and out-of-context assertions, all they have left to do is claim “bias.”  You know, since they can’t defund them.

Or, of course, they could stop making claims they can’t support.  But that won’t win many elections.  America would rather hear a pretty lie than an ugly truth.  And unless one is versed in critical thinking and analysis, (which the GOP led the charge against being taught in Texas high schools in 2012), it’s difficult to tell the lies from the truth.

The GOP knows that they can make any claim they want, and a large number of people will believe it because it plays to their existing prejudices.  (Like, “I’m going to cut taxes, deport all the illegal aliens, build a wall, cut regulations, win the war in the Middle East and still lower the deficit.”)  So when the press or a fact-checking website run the numbers and say it’s not so, they get smeared as having anti-conservative bias.

In fact, if there’s a bias from these institutions, it’s a bias against bullshit, which I think should be celebrated rather than castigated.  I say let the truth be told on all sides.

That’s another myth, that the fact-checking sites are inherently liberal.  Anyone that looks can plainly see that they hold both parties’ feet to the fire.  Democrats get called on misinformation as well.  I just don’t hear any of them complaining that the sites are biased against them.

And if there is more debunked material on one political side than another, maybe it’s because that side puts out so much more stuff that’s in need of debunking.

But going back to the original subject of debates, I think the moderators should take an even more aggressive approach to both party debates.  I think they should have a team of researchers looking up every specious claim that’s made, with a line to one moderator’s ear, whose only job is to be the referee.  Then they can “fact check” the debate in real time before the public is left with the permanent stain of misinformation.  In addition, I would put a running total up in the corner, like they do for football games.

If the presidential wannabees don’t want to get rung up, then tell the truth, in context, without exaggeration.  If they can’t tell the truth when campaigning, what makes us think they’ll tell the truth during their presidencies?