So far this summer, my entertainment options have been limited to movies and baseball games.  And no, that’s not a complaint.  I’m doing what I enjoy.

What with it coming up on summer blockbuster season and all, I plan to keep myself occupied.  As I’ve been at the movies and watching trailers, I’ve been making notes to myself on which titles look worth attending and which I might look for on DVD.  The list is getting pretty big, though.  I may have to whittle it down as the summer progresses.

As soon as I got home from Florida, I went to see "Captain America-Civil War."  As a fan of the Marvel movies, don’t get me wrong, it was a great movie; but I had mixed feelings about it.  I don’t like to see the Avengers fighting amongst themselves.  Much like with Batman v Superman, I don’t want to see Mommy and Daddy fighting.  Everything is much more enjoyable when they’re all on the same team, fighting bad guys.

Last Saturday I went to see “Money Monster,” with George Clooney and Julia Roberts.  You may have seen the commercials; it’s basically a hostage drama, with a side of financial malfeasance.  The premise is that Clooney does a kind of clownish investing show, sort of like Jim Cramer on CNBC, with more flash.  Julia Roberts is the director in the control room. 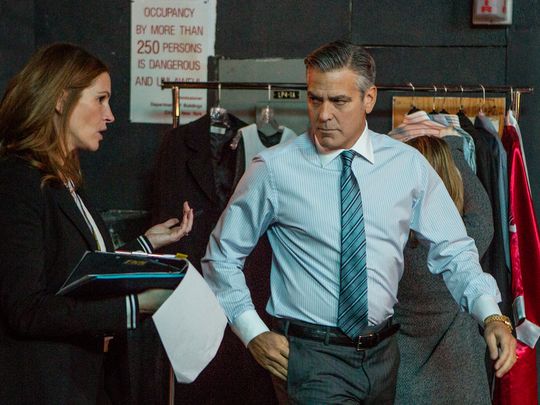 During a live episode, some poor schlub, who lost his life savings by following Clooney’s advice, sneaks onto the set and slaps an explosive vest on the host and holds everyone hostage.  It was the cinematic equivalent of when Jon Stewart got Jim Cramer to come on the Daily Show and roasted him over touting Lehman Brothers long after he should have been onto the scam.

While the hostage drama has been done to death, the interesting part of this movie was how they followed the money trail to get answers on what led a giant firm’s stock to suddenly tank (causing a loss of 8 billion dollars to investors).

Clooney and Roberts crackle with energy, chemistry and snappy dialogue, just like you’d expect from such old pros.  You may not need to see it in in the theater but it would make a good rental.

I usually only go to the movies to see big FX-laden blockbusters, but I did thibngs backward this weekend.  After seeing a mostly single-set, dialogue-heavy drama in the theater, I then picked up “Deadpool” on Blu-Ray to watch at home.  By my usual standards, I should have gone the other way around.

If “Antman” was a step or two lighter for a Marvel Cinematic Universe (MCU) movie, Deadpool was several leaps darker.  It was far more violent, with lots of R-rated language and gratuitous skin and sexual references.  It was also hilarious and wildly entertaining.  It fairly drips with pop culture and movie references, breaks the 4th wall repeatedly, and is by far the most cleverly written of any in the MCU.

This movie is from the X-Men corner of the MCU, rather than the Avengers side, so naturally they had a couple bottom-tier X-Men show up, which led to a line that exemplifies the kind of snark in which “Deadpool” revels.

One of the X-Men, Colossus, wants to bring Deadpool back to the School for the Gifted, to talk with founder Charles Xavier.  Deadpool quips, as he’s being dragged off, “Which one, McAvoy or Stewart?”  (James McAvoy plays Xavier in the “flashback” X-Men movies while Patrick Stewart plays him in the present day timeline.)

I love “meta” schtick so I ate this stuff up.  Ryan Reynolds was perfect as the fast-talking quipster, with mad ninja skills and the power to heal from any injury.  Of course, the downside is he looks like a 3rd-degree burn victim, and so must wear a full face mask most of the time.  In fact, in the movie, in another brilliantly meta moment, he described himself as “a cross between Ryan Reynolds and a shar-pei.”

The balance of the movie is about his efforts to find the guy who made him this way and force him to fix his appearance, so he could get his girl back, (played by the delectable Morena Baccarin).

Anyway, great movie, but clearly this one is for the grownups and not impressionable children… or impressionable grownups, for that matter.  All I can say is that as soon as it was over, I wanted to watch it again.  (But I didn’t because the Preakness was coming on.)

I went to see three Orioles games last week, Sunday against the Tigers, then Tuesday and Thursday against the Mariners.  The O’s lost all three (after winning the first four I attended), so I’m on a bad mojo streak.  Went by myself on Sunday and sat in the lower bowl, down the 3rd baseline.  Tuesday, I went with Sitcom Kelly, who had her mom’s company seats behind home plate.  (Of course, it drizzled the entire game.)

On Thursday, though, the Orioles were playing their only home weekday afternoon game of the year.  I like to take at least one “Ferris Bueller” day every season, so this one had to be it. 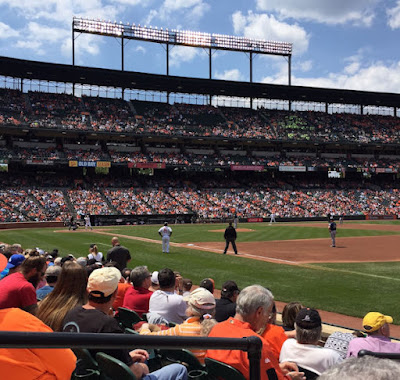 I sat among a lively group, including a cute 40-something woman attending with her parents (sitting in front of me) and a nice young couple of recent college graduates beside me.

We were in row 7 of the lower bowl between 1st base and the outfield wall and I was the 2nd seat from the.  In the aisle seat, there was an old baseball “lifer,” which I surmised from the bag of snacks he brought and the battered baseball glove.  He never said a word the entire time.

Around the 4th or 5th inning, he got up and headed up the stairs.  A minute or so later, the lady behind me tapped me on the shoulder and asked if I knew the guy on the end.

She said, “Because he just fell down on the stairs here.”

I looked and there he was, lying in the aisle about 2 steps up from our row.  The ushers were attending to him and eventually got him on his feet and took him, I presume, to an ambulance.

But on the bright side, I got some elbow room.

I had thoughts about asking out the woman in front of me.  She didn’t have a ring on and she seemed to spend a good deal of time turning around and talking to me, but I thought better of it.

First, she was there with her parents.  There must be some kind of rule about asking a girl out in front of her folks.

But more importantly, some other big-head dude came and sat with her for a couple of innings.  They seemed mighty familiar with each other, but not overly so.  I thought he might have been a brother, but he pretty much ignored the parents and only said perfunctory goodbyes.  Anyway, it was enough to spook me out of the moment.

Still, we had a lot of fun for the afternoon.  That’s why I keep going to games by myself.  You never know who you’re going to meet.

With all my regular TV shows winding up for the season, I’ve been relying on DVDs to fill in the holes in my life viewing schedule.  Last month, I picked up the first two seasons of Ally McBeal.  Yes, I know that doesn’t seem like something I’d watch, but I started with it during the first episode back in 1997 and watched every week until it was canceled.

It was kind of like LA Law on hallucinogens… Law office staffed by weird, neurotic, gorgeous people.  I absolutely adore Calista Flockhart and might have even formulated plans to win her for myself, but unfortunately, she’s married to Harrison Ford.  And nobody steals Indiana Jones’s girl.  Or Han Solo’s or President Marshall’s.  So that’s pretty much a dead end.

(Funny aside: Calista Flockhart played Supergirl’s boss on “Supergirl,” and in one scene, she comes into the office talking on her cell phone, “You tell Harrison Ford I’m not going out with him.  He’s too… OLD. And too married.”  I love that meta shit.)

In the second season, they added Portia de Rossi and Lucy Liu to the cast.  First of all, I forgot how smoking hot a young Lucy Liu was as “Ling.”  RAWR!

But Portia de Rossi’s character, Nell?  I almost did a spit-take when she came on. 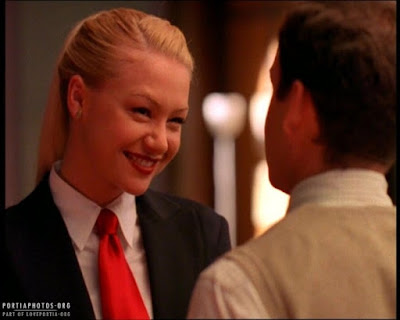 Nell had a very strong resemblance to my old college roommate, “Diane,” who you may remember from my “Summer of Bow-Chicka-Wow-Wow” posts.  I don’t know how I never saw it before, during the original run.  And then Nell mentioned how she’s turned on by sex in public.  Almost choked.

I had to sit for a minute and figure out if there was any possible way “Diane” could have given up her career as a technical writer and gone to Hollywood to seek fame and fortune (and Ellen Degeneres) as Portia de Rossi.  (There was not a possible way… the ages don’t line up and Portia is Australian.)

Anyway, it’s been enjoyable to watch again.  Eventually, I’ll pick up the next season, but in the meantime, I just ordered two more shows to fill up my unplanned nights, “The Unbreakable Kimmy Schmidt,” and “House of Cards” (1st seasons for both).

Both are Netflix series so I haven’t had the opportunity to watch.  But everyone has told me I’d love House of Cards, which I don’t doubt. And Tina Fey produced Kimmy Schmidt, so I’m sure I’ll like that one too.

Next time I’m this hard up for ideas, I’ll let you know.
Posted by bluzdude at 7:41 PM