The Glory of Doing Nothing

I apologize again for skipping a post last week, but not really because I was on vacation.  I took my annual trip to go see my old buddies back in NW Ohio, the VP of Hell No and the Chairman of Fuck Off (or CFO).  I wasn’t keen on doing anything that resembled “work,” lest I start down the slippery slope and accidentally do something productive, while I’m supposed to be relaxing.

The trip was almost kiboshed before it even started when I leaned over to grab my suitcase and felt something “pop” in my right calf.  It wasn’t very painful but it felt funny.  I couldn’t get much push from my foot when I walked.

Then by the time I got off the plane, I had a significant limp.  But even limping along like Verbal Kint, I was still moving faster than the hordes of dum-dums in the airport, around whom I had to maneuver.

As I progressed through the remainder of the day, it continued to cause me to limp, so I feared my vacation might be remembered more for icing my calf than icing my quaff.  But when I got up the next day, it felt much better.  There is still a “catch” in my calf and I still can’t push off with my right foot, but I don’t need to limp.

You don’t want to be seen limping around Baltimore… you just look like prey.

Anyway, we’ll do a quick rundown of the week’s activities, such as they were.

Saturday
The VP picked me up at the airport and we headed straight back to the local tavern.  He just lost his Dad last month so this was the first time we didn’t stop to pick him up before going to the bar.  There, we toasted our lost friends and family.

Back at the house, the VP’s son and his family were visiting from Columbus.  The CFO and his daughter came out as well and we had dogs and burgers on the grill.  The VP just recently got DVR service so we rounded out the night by watching various Steelers-related shows and specials.

Sunday
I’d never been to a Costco before so we rectified that on Sunday.  We had to stock up on meat products for the week’s grilling. 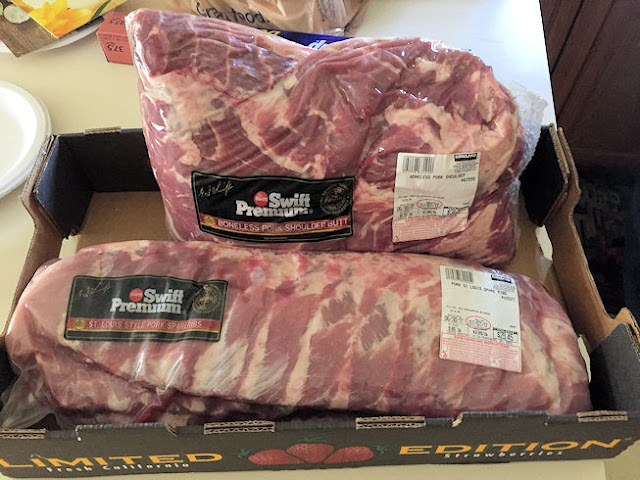 Three racks of ribs and eleven pounds of pork butt.  That’s what I call a Pork-a-palooza.

The previous week, I took my first serious try at eating blue crabs (a Maryland specialty.)  Sweetpea taught me how it’s done and I muddled through about five crabs. 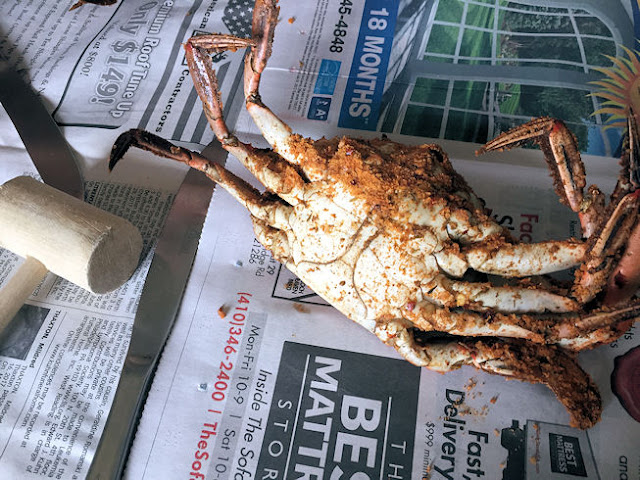 Working on my first blue crab.

What I learned is that it’s more about having a social event than actual eating.  When they talk about eating crab in the Midwest, it’s an entirely different thing. 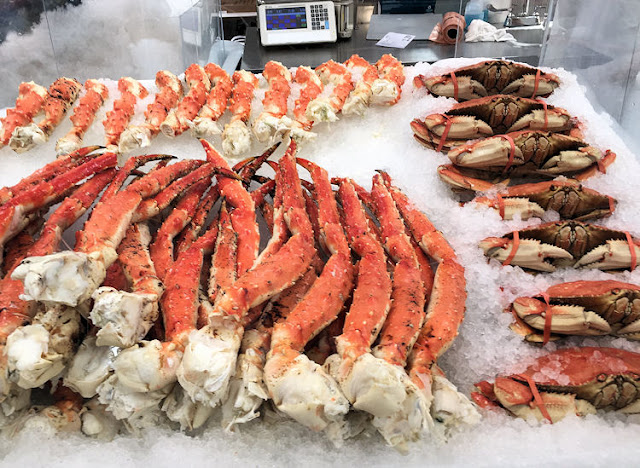 The crab case from Costco.  Now that’s my kinda crabbin’.

I also learned that you can make a lunch out of nothing but samples at Costco.  There was one table handing out grilled steak pieces.  We walked by and a couple of ladies said, “$8.95 a pound,” as we took a sample.  When we doubled back later, there was a dude there.

Another lady was cooking seasoned pork loin medallions.  We circled her like sharks, waiting for her to put some on the tray, but she kept putting her finished morsels in a plastic container.  The VP and I must have hovered for 20 minutes, waiting for her to produce the goods.  When she finally did, people came running from every direction.  We weren’t the only ones staking her out, I guess.  The smell alone was drool-inducing.

That evening turned out to be bratwurst night. 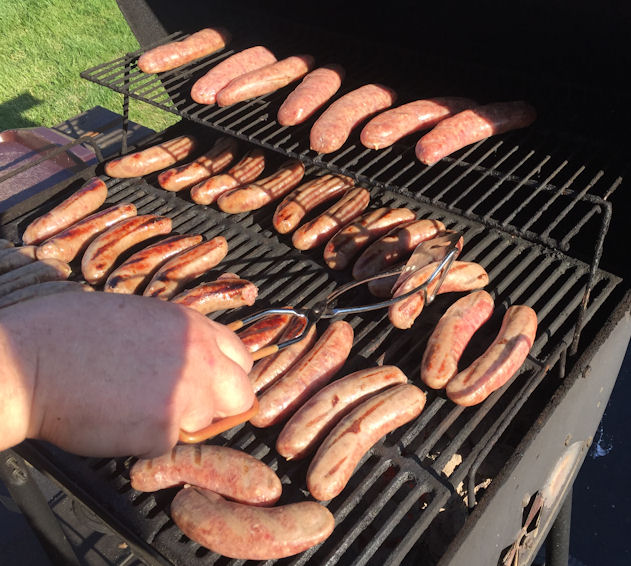 The CFO and his daughter were back, along with her boyfriend.  His other daughter was there too, with her baby.  And the VP’s son’s daughter arrived as well… I spent 30 seconds talking to her before I even realized who the hell she was.  When she saw me, she ran up and gave me a hug, and I’m thinking, “Who the hell is this?  I know it’s the VP’s family… which one is she?”

It had been at least six years since I’d last seen her, when she was 4 or 5 years old.  I’d even blogged about it, remarking about how little girls “flit” rather than walk.  Couldn’t believe it was the same person.

Monday
The VP’s wife’s family all came for the day; most of whom I’d never met, and those I had, it had been at the VP’s wedding almost 40 years ago.  So I mostly chilled in the TV room and watched movies.  Of course, I had to come out for the pulled pork. 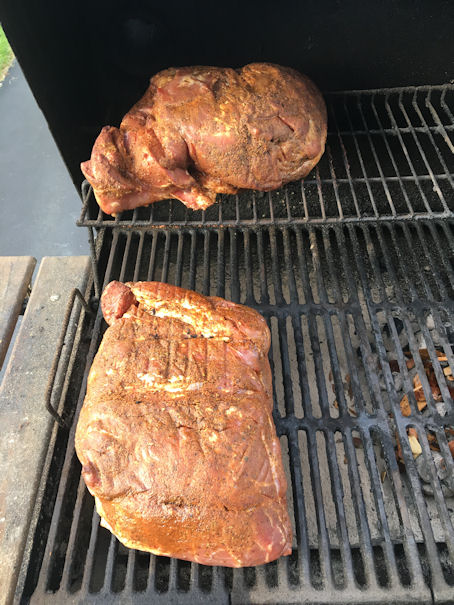 The pork, in its initial, un-pulled state.

I finished the night at the tavern, with the VP and CFO.

Tuesday
The VP has more tools than any human I’ve ever met.  I should have known it was a “like father/like son” situation.  He told me he got his dad’s tool box.  I figured it was a regular tool box, about the size of a fishing tackle box.  I was mistaken. 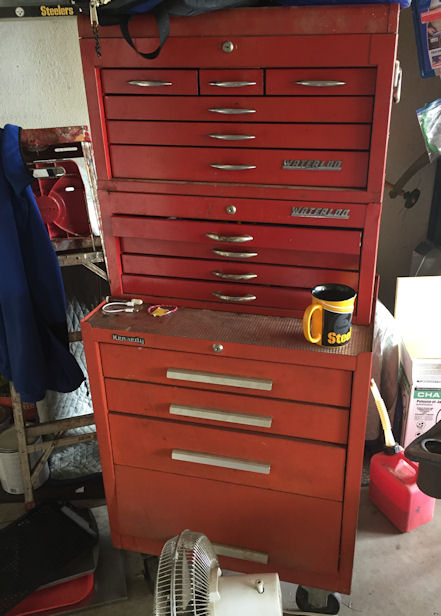 I should have known that this was what his family considers a “tool box.”

From inside the toolbox, the VP pulled out the biggest Allen wrench I’ve ever seen. 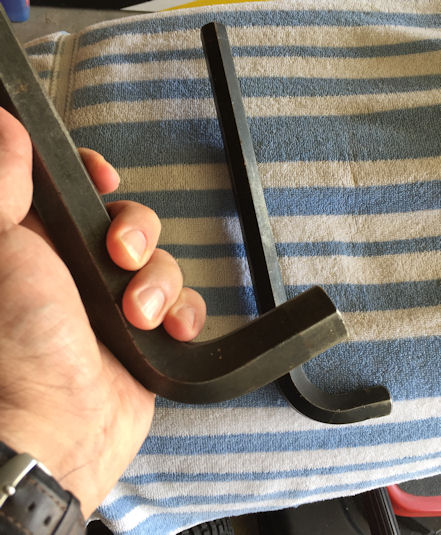 It looks like it came from some exotic IKEA that sold furniture for giants.

Tuesday was the Fourth of July, (Happy Anniversary, Mom and Dad!) so we just hung out at the house.  The VP smoked the ribs, which were a-MAY-Zing! 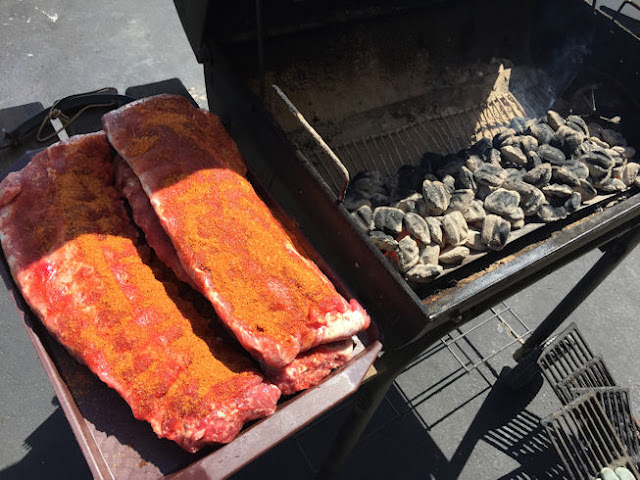 The CFO, VP and I killed the night digesting our ribs and watching movies.

Wednesday
If you thought the trip to Costco was exciting, you should have come with the VP and I to the DMV, so he could get his license renewed.  (We really know how to throw a vacation!)

Really, it wasn’t too bad.  Only took about 20 minutes, unlike the two and a half hours it took me the last time I had to renew in Baltimore.  But the best part was the office was a couple doors down from a Mexican restaurant, where we went for lunch.

They asked if I wanted a large or small beer, which I usually take as a trick question.  Of course I want the LARGE beer… But then they set this 32-oz monster mug down in front of me.  [Gulp] 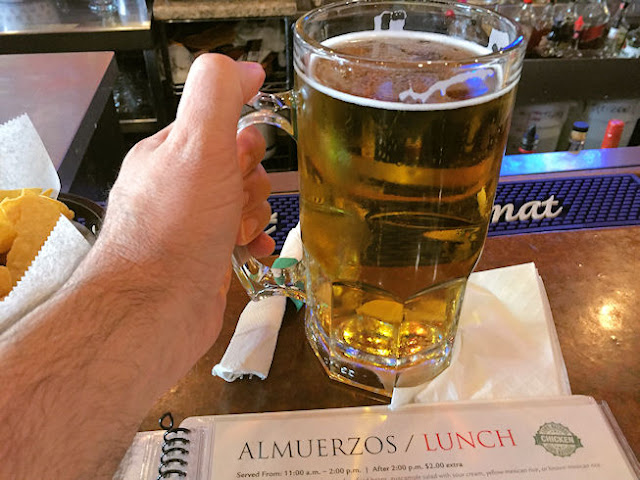 I swear, I had to two-hand that one.

We couldn’t fill up though because we had big plans for the evening.

Every year when I visit, we always earmarked one night for a visit to my old college town to get the best pizza on the planet, at a shop called Myles Pizza.  Unfortunately, Myles closed last year, so I was not anticipating a trip this year.  However, the CFO’s daughter (who just graduated from my alma mater) told me that she heard the place that replaced Myles was very close in quality.  So I figured we’d have to check it out for ourselves and do some due diligence.

I was mighty glad we did.  It was practically the same pizza, and just the way I like it… Massive. 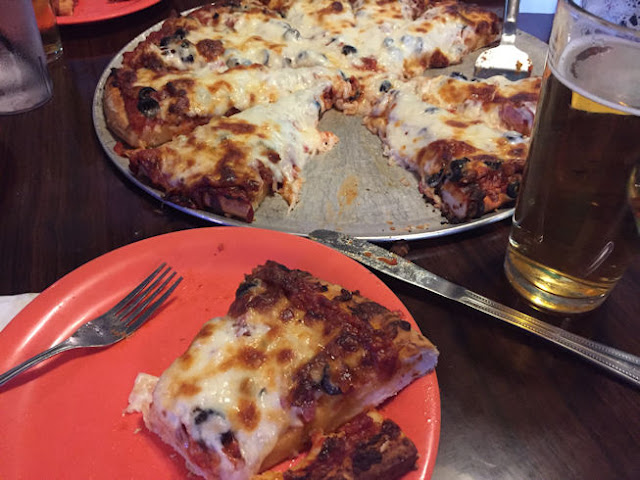 The new establishment's name: 516 Pizza.  I think the 516 comes from how many ounces are in the pizza.

There was no beer for us after that dinner.  We had to make do with something less filling but no less satisfying; a nice bottle of Woodford Reserve.

That night, the local town had its Founder’s Day fireworks show, but we didn’t have to go anywhere.  We could see it from the VP’s driveway. 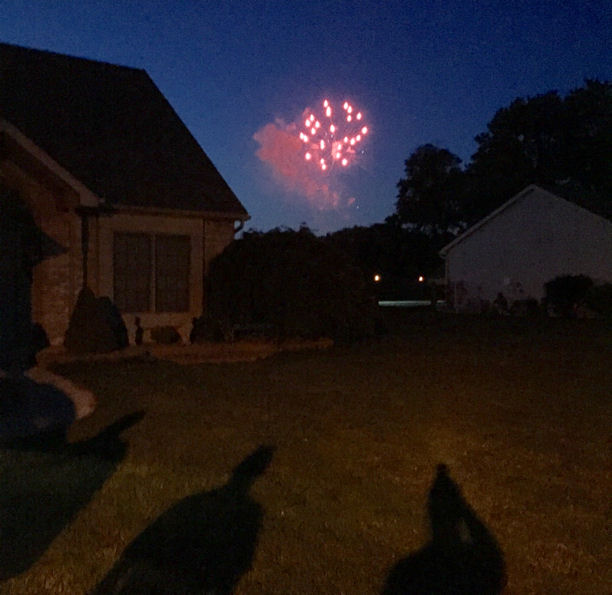 Thursday
The VP and I watched some more DVRed Steelers stuff, including the Steelers/Chiefs playoff game from this January.  It was funny because I remembered practically nothing about that game.  Not coincidentally, that was the evening I first met Sweetpea.  I was probably distracted. 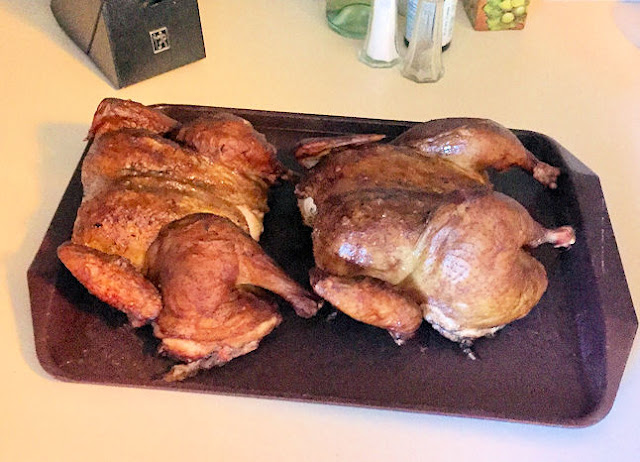 Not pictured: the baked potatoes.

Friday
My last day in town was as uneventful as the previous five. We hung out until afternoon, then went out to the tavern for dinner.  (Fresh perch special… no pics though.  You’ll just have to use your imagination.)

I know it sounds like my vacation is nothing but a big zero.  We didn’t really go anywhere exciting or do anything unique.  But, like every year, it’s what I need: just some uninterrupted time to unplug from daily stress and workplace pressure.  I want to somewhere I can just be… hang with my oldest friends, drink cold beverages, eat grilled meat, smell the clean air and look at the stars.  Or at least, movie stars.

I know it’s not exotic or fascinating but it’s what I need.  I returned to my Sweetpea’s arms on Saturday, loaded with stories, scuttlebutt, a couple pieces of leftover pizza and two quarts of pulled pork.

Perfect end to a perfect week.  Thanks, guys, for having me out.

Email ThisBlogThis!Share to TwitterShare to FacebookShare to Pinterest
Labels: Bluz LIfe, Picture This, The Glory of Meat