The other day I found myself emailing with my Hot Arizona Auntie, Judie, the Rogue Artist.  Seems she had a bit of a problem with Blogger (and who doesn’t?) where it posted her same comment 8 times.  I emailed her to tell her that I would delete the extras.
Bluz: It’s just another service from your friendly, neighborhood Heathen.
Judie: Heathens are the best kind of friends!
That got me thinking, which as you know, can be dangerous.  But it can also provide an angle for a blog post!
I immediately started composing a list of why Heathens make good friends.  It started out pretty silly, but kind of snowballed from there.  It didn’t emerge all at once, but over a series of emails with Judie.  It’s so much easier for me to create when I’m outside the echo-chamber of my own head.  So with that, I give you:
Why Heathens Make Good Friends
In related news, do you remember a couple posts ago where I showed you pictures of the new tee-shirts I got for Christmas?  (OK, I got them for myself, but whatever…)  I mentioned that one of them, my “Heathen” shirt, was delivered in a Boys XL size instead of a Mens XL.
(Heathen shirt pic)
When I contacted the fine people at Café Press, they immediately sent me the proper size and said to just keep the original one they sent me.  They didn’t want it back.
That’s fine, of course… saved me a trip to the post office.  But I don’t know any XL Heathen boys… what am I going to do with a Boys XL Heathen shirt?  .
Why, have a give-away, of course!  And this one isn’t even complicated… first one that asks for it, gets it.  I’d say it would fit a small to medium-sized female so don’t think it necessarily has to go to a child.  I’m 6’3” and two hundred {cough)ty pounds and I could fit into it, although it was snug like a scuba suit.  And don’t worry, I had it on and off in about 6 seconds.  It is not befouled in any way.
Here it is, in comparison to a Mens XL from the same shipment. 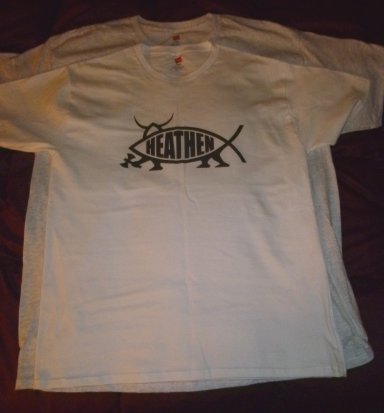 Just tell me you want it in Comments (so others then know not to ask) and email me your address (and name, if you go by a nom de blogge).  Check the “Important Stuff to Know” page for my email address, if you haven’t emailed me before.
If no one claims it, I’ll be forced to donate it to an organization like the Salvation Army or Catholic Charities.
If I didn’t know that it would never again see the light of day, it might be worth doing, if only to see the looks on their faces.
Posted by bluzdude at 4:00 PM