Well, my luck held out. Now I live someplace else.

After what seemed like an eternity of preparation, Sweetpea and I are engaged in a raging case of premarital cohabitation.

Last night was especially weird. Most Sunday nights, I leave her place around 7:00 or 8:00 pm and go back home. This time, I didn’t have anywhere else to go.

Like I said in the last post, I’ve been staying at her our place since 7/13. I used vacation days for last week, so every day I went back to my apartment to pack up the last of my crap, and do all the things I didn’t want to do yet when I still stayed there. (Like take down the blinds. On the bottom floor, I don’t like that people can look right in.)

I also went down my list of services and utilities I used, to update my address with them or discontinue services. There’s something about filing your change of address with the post office and voter’s board, that makes it seem very official and past the point of return.

I’d been worried about the movers showing up on Wednesday, but I needn’t have been… they got there an hour early and beat me there by a few minutes, as I detoured for breakfast. Croissandwiches in hand, I let them in and showed them around. By this point, there weren’t any boxes left to be moved; just furniture.

These guys flew into action. One second all my furniture is there, the next, everything’s got blankets taped around them and were being carried out the door. And in addition to being super polite and respectful, these dudes were strong. They didn’t look like body-builders, but each one could carry a large piece of furniture by themselves. (Those days are long gone for me, if I even had them in the first place.)

Seeing a place I once inhabited stand empty is always a melancholy experience for me. Granted, it’s the same view as when I move in, but it’s a different perspective. When you’re moving in, you see all the potential. When moving out, it’s just an empty shell of what used to be; the location of good times and bad. 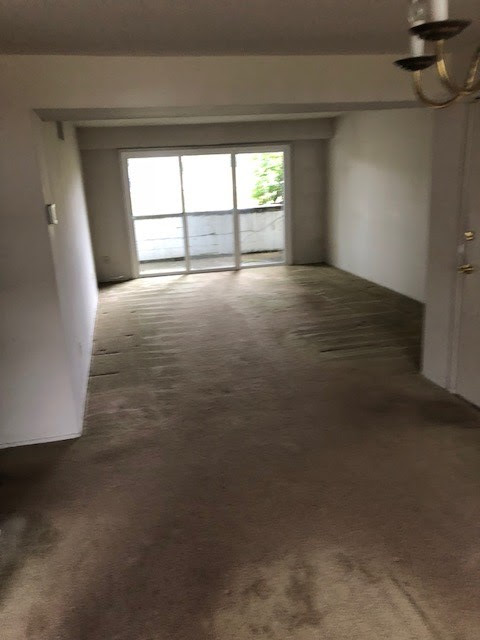 After a little more than an hour and a half, I bid a temporary adieu to my apartment and we all headed down the road, to reverse the entire process.
Fortunately, the dog was spending the day at Sweetpea’s sister’s house, or else he’d have gone ape-shit with all these strangers tromping around his house. He gets angry when someone has the audacity to walk down his street!

Having movers bring your furniture into your place is like being a traffic cop, only you don’t recognize the cars. A guy would go, “Mr. Bluz, where do you want this?”

At least I had Sweetpea to help direct traffic. Well, except the times where I had one idea about where something should go, and she had another. It didn’t happen often, as we’d already discussed where the big pieces would go. But we still had some undecided items. With dudes carrying them around, we had to decide quickly.

It was funny; one guy commented on my “Steeler Fan Parking Only” sign that was hanging in the basement. Knowing Sweetpea was a Baltimore girl, he told me, “You got that Steelers sign up on the wall so you can see it as soon as you come downstairs. You must be the boss around here.”

I said, “Dude, it’s in the basement. If I was really the boss, it would be upstairs!”

The movers were done at the three-and-a-half-hour mark, which brought me a bill of about $650. Considering all I didn’t have to do, it was totally, completely, worth it.

It’s a bit overwhelming, though, once the movers leave and it’s time to start putting things away. It’s like, you just don’t even know where to begin. But Sweetpea and I have a saying… “Just start chopping wood.” In other words, pick something, do it, go on to the next thing. Repeat.

So we started with the low-hanging fruit and worked out from there. By the time she got back with the dog, I had the TV in the living room working. By the Thursday, I had the stereo equipment hooked up and functional. Not that it didn’t have some frustrating moments.

I wanted to use my component system set up in my giant, heavy-ass entertainment center. But she doesn’t like speakers hung on the wall (like mine were) so I figured we’d use her small Bose speakers. But my receiver needed speakers with raw wire attachments. Her Bose speakers had the usual jacks.

Earlier in the week, I texted my buddy, the VP of Hell No and expert on ancient stereo components, to ask him if I clipped off the jacks, would that raw speaker wire work? I didn’t want to ruin her speakers and not have it work. He waved me off that idea and said I could get an adapter with the raw wire on one side and the jack on the other.

Awesome! I ordered a couple from Amazon, and when they arrived Thursday, I set up the stereo equipment and moved the speakers. At that point, I re-learned the old lesson about assuming. I really should have looked at her speakers. If I had, I’d have seen that they didn’t have jacks after all; they were connected with the raw wire. Just as I needed. Without any adaptation necessary.

Oh well. Amazon is good with returns. And after a good tussle and a lot of naughty words, everything works. We can play CDs, LPs, and cassettes. (Cuz that’s what we have, in spades.) 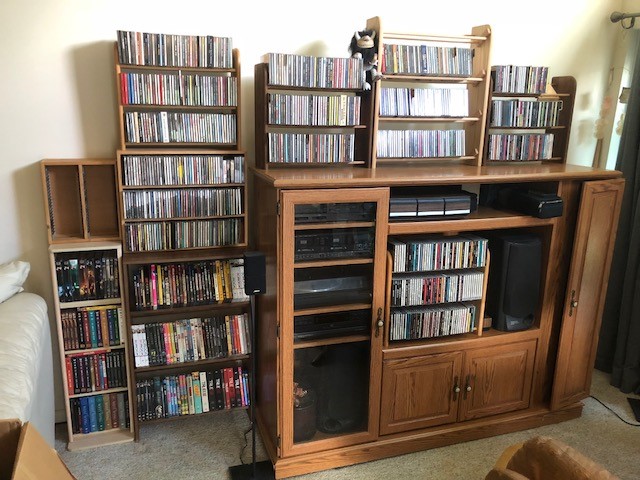 Friday, the cable guy came, which was the last major piece of the puzzle. Both she and I had cable, but I wanted to transfer my service to her address and have her kill hers. The cable company would provide their triple play service, of TV, internet, and phones so she could kill her phone and internet service too.

Also, since we cumulatively owned four TVs, we wanted to use them all. Her main TV went downstairs to the future Man Cave/Escape Room. My main TV went into the living room. Her bedroom TV stayed there, and my bedroom TV went into the back bedroom. With that arrangement, we’d need cable wired to the back bedroom, and office, where the computers would be.

Took the guy over 4 hours but he got it done and everything worked perfectly, phones and all. The only thing I’m missing now is another mirror system, to watch TV from the can. But you can’t have everything, can you?

We’re about squared away now. We’ve just got some more kitchen stuff to integrate, and we need to find a place to store my towels and linens. And then we just have to find that daily rhythm, which so far eludes me.

We both have very different ideas on what constitutes tasteful decorating. She prefers clean, clear, open spaces. If it were up to me, I’d have every square inch of wall space covered with a picture, painting, photo, album cover or poster. And every centimeter of horizontal space with a figurine or some other tchotchke placed on it. So there’s some negotiating to be done, for sure.

One happy side effect of this move… I get to cut down my key ring by two keys. No more house/deadbolt/mailbox keys; now just one simple front door key. I feel lighter already.

We went out to dinner Friday night, and I forgot my wallet, even though I created a place specifically for it, where I’d never forget it. (Thanks for covering, Sweetpea! I owe you another dinner.) That’s when I realized that old habits weren’t transferrable. Just because I had a regular place for my wallet at my old apartment, doesn’t mean the same mechanics are in place at the new house. I’ll just have to count on repetition to engrave it into my brain.

It’s the same with a lot of simple tasks that I’ve done in a particular way for the last 20 years. Like getting dressed in the morning. I used to lay out my clothes the night before… shirt on a hook, pants on a hook beside them, socks and undies beside my ottoman, shoes within reach. I’d come out of the bathroom, which was attached to the bedroom, put on undies and socks, pull the shirt off the hook, pants go on, sit back on the ottoman and put on my shoes. Done.

Now, the bathroom is in the hall and my clothes are in the back bedroom. I have to figure out what comes in the bathroom with me, where I hang my clothes, and where I put my shoes. All this is complicated by the fact that if the dog wants attention, he will grab any pair of socks, undies or shoes that he can reach, whether from the bedroom, bathroom or wherever, and parade around the house with them.

On this one, I’m probably going to have to settle for less than perfect efficiency. It won’t kill me.

And on the bright side, I get to live side by side with the love of my life.

I look forward to seeing what happens next.
Posted by bluzdude at 7:25 PM