Sorry about not posting last week, I was out on vacation taking Sweetpea down to Florida to see my folks. I had thoughts about doing a post from down there, but it leaked right out of my head, along with any other thoughts of doing something productive.

It was an OK trip going down, only minor delays, but we coped just fine. 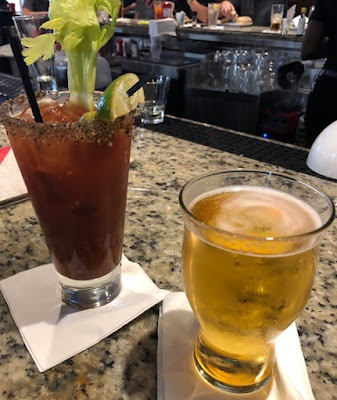 I’ll tell you, though, if you want to lower your opinion of the general traveling public, take a flight somewhere. The whole experience was one instance of bold-faced rudeness and inconsideration after another. And apparently, Delta’s plan for passenger space in overhead bins was more “Mad Max” than “A Beautiful Mind.” People were putting small bags and purses in the overheads, leaving the rest of us to scramble to find space for our regular-sized rolly-bags. The Delta flight attendants basically just watched the show. Maybe they had bets on how far away from his seat someone would stow his bag.

But we and our bags made it unscathed and after drinks, mustered out to a local restaurant for dinner. I should have known that something was up when my parents took us to the same place we used to surprise my mom for her 75th birthday.

After Dad quietly consulted with the hostess, they led us to the same back room, where I saw two people with menus up over their faces.

Aha! I knew it would be my sister and brother-in-law… they’d just been texting us.

But no. It turned out to be my buddy, the CFO’s son and daughter, Jacob, and Kyrie, on a road trip to take her back to Houston. Surprised the hell out of me. Kyrie has been the muse for some of my favorite and most enduring posts. Kyrie’s just finished her first year teaching and Jake is going to attend the University of Cincinnati this fall. I swear that last week, they were only babies. 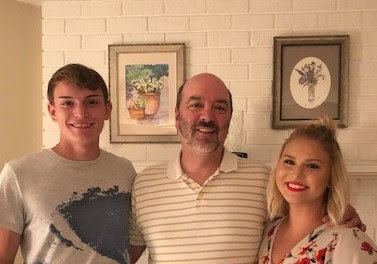 I’d seen on Facebook that they were going to be in Atlanta that week, and I tried my best to convince them to come down a little further, but they shot me down, pleading that they already had all their arrangements set in stone. Seems they had this planned with my folks all along.

So, we held Part One of the Wild Rumpus at the restaurant, then adjourned to the house for Part 2. I had told Sweetpea that the first night in town was always a boozy gab-fest, so I looked like a seer. I’d been wanting to get her together with Kyrie so she could offer help and advice to a newly-minted teacher.

I also took advantage of the opportunity to slip Jacob some graduation money and thank him… because of their visit, I didn’t have to go out and buy a card.

Later, I told Kyrie it was all their fault that after they showed up, my vacation had nowhere to go but downhill.

But not totally. I always appreciate having the time to shirk my responsibilities and just chill for a few days. Sweetpea especially needed some veg time, coming off a long and difficult school year.

For the occasion, my dad invested in some new pool floaties. 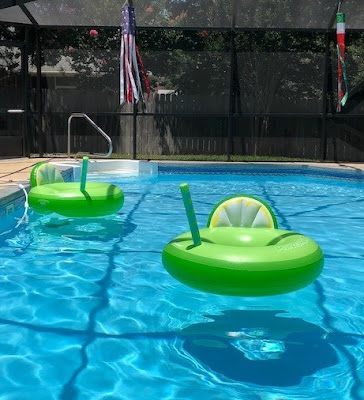 After floating around on these things for a while, you totally feel like a Margarita.

Dad likes floating in them too. In fact, at one point, Sweetpea and I took turns pushing him between us in the floatie from one end of the pool to the other. It was like I was taking part in the Great American Pastime… playing catch with Dad.

Or I suppose you could call it Geezen Shuffleboard.

One day, Mom taught Sweetpea how to make “icebox dough.” That’s dough you use for pizza crust, cinnamon buns, or whatever. With a name like “Icebox Dough,” you can see how long this recipe has been around. I admit, my motives were selfish in making sure this “training” session happened.

I mean… who wouldn’t want pizza and cinnamon buns around the house?

The rest of the week was continuous series of swims and meals and drinks. We didn’t get to the beach until Monday, our last full day there. Sweetpea and I hung on the beach for a couple hours, before the Oldes picked us up for lunch. 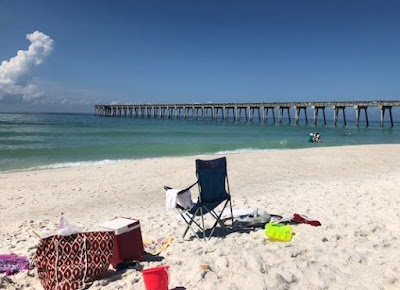 Part of our beach mission was to find a little piece of sand upon which we can get married next year. The main beach was nice but would probably be crowded. (The last thing I want is for our wedding pictures to be photobombed by oily tourists in Speedos.)

After lunch, we took a drive further down the beach, away from the nest of hotels, and found a nice little spot with few people on it. (And this was around 1:00 PM. We have Estimated Wedding Time set for about 9:00 AM.) So now we have a plan.

I’d post a pic of the spot, but I don’t want to tip my hand. Also, and not insignificantly, I forgot to take a picture of the area in the first place. But trust me, it will be simple but beautiful.

We plan to do a kind of “guerilla” wedding. We’ll show up out of nowhere, just us two, our parents, and the wedding official, do the “I dos,” and be gone in ten minutes. Then off to our special wedding breakfast at Denny’s.

And maybe we’ll invite Maurice, the house gecko. He seemed interested in our wedding discussions. 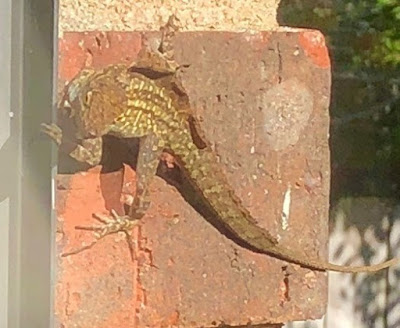 The trip home was a bit more chaotic. Before we even left the house for the 7:20 AM flight, our hour and a half layover in Atlanta turned into a 3 hours layover. And once there, it got extended a half hour at a time until we were stuck there for almost 5 hours. But it worked out and we made it back home, bags and all.

But it was all good. We rode out the delays together and kept reminding ourselves that we’d be back. And next time, we’d leave as husband and wife. 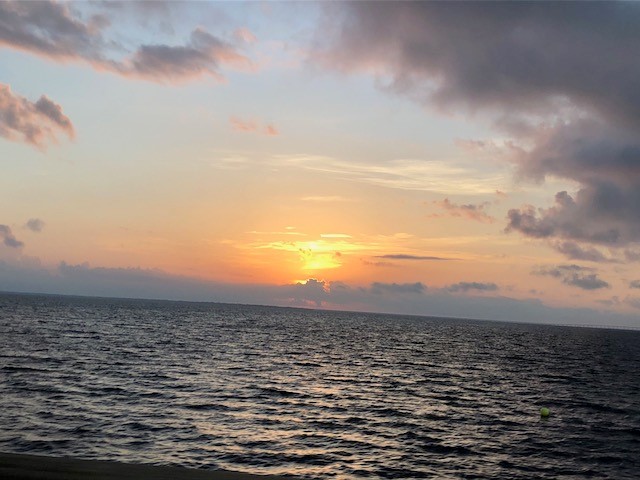 Many thanks to Bluz Mama and Papa, for providing such an awesome place to hang out. And for all the laughs and food and drinks… (lots and lots of drinks.)

Oh this beach and pool look wonderful about now!! Beautiful pix.
I got married on the beach in Jamaica...perfection.
I can't wait to see the pictures from that. :-)
Happy 4th. Stay cool.

My sister and her husband went away to Monterey, CA, to get married on the beach. Looked like fun, so we want to try it. Plus, it's a huge cost saver!

All her idea too. She doesn't want anything fancy. I had a big wedding before (25 years ago) so I don't need another one. All works out!