A 45 Caliber Noise from a BB Gun Argument

Beto went and did it; he gave the gun nuts the sound byte they’ve been looking for when at the last debate he said, “Hell yes, we’re going to take your AR-15 and AK-47.”

He continued, “We're not going to allow it to be used against our fellow Americans anymore... If the high-impact, high-velocity round, when it hits your body, shreds everything inside of your body because it was designed to do that so that you would bleed to death on a battlefield ... when we see that being used against children.” 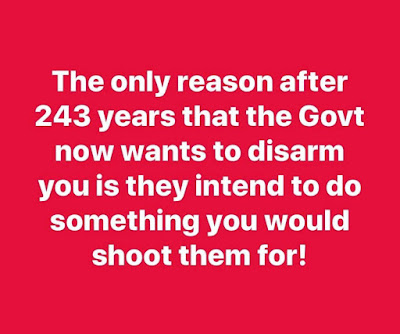 There’s much to disassemble about that argument.

First of all, and this goes to the very basis of this house of cards, no one is being disarmed. Even if they confiscate or buy back every semi-automatic weapon in the country, we will still have the most heavily armed populace in the world, with handguns, shotguns and non-semi-automatic rifles. US citizens will by no definition be “disarmed.”

They say something is happening but it’s not. That essentially ends the argument.

But why stop there?

Another glaring problem is found in the first three words: “The only reason…”

Excuse me but the second paragraph of this post provides another wholly sensible reason, which comes down to this: there is no valid purpose to a civilian population owning this kind of military hardware.

Every “yeah but” can be answered with “Use a different gun.” (And if you’re not a good enough shot to hit your target with anything else, that’s another damned good reason not to have a semi-automatic rifle!)

I mean, seriously? The Democrats, who are not in power, are currently hatching nefarious plans that would be only be thwarted by civilians armed with AR-15s? This is foil hat territory.

And like I often say, ask the Taliban how owning lots of semi-automatic rifles helped them fight off the US military. Who got forcibly moved out of their territory and who did the forcing? They and their AK-47s were hiding among the women and children, trying to get away.

You want another reason? Fine. Look at the dip in mass shootings (in which 6 or more were killed in public, non-gang-related incidents) before, during and after the assault weapons ban that we already had (and Republicans let expire). 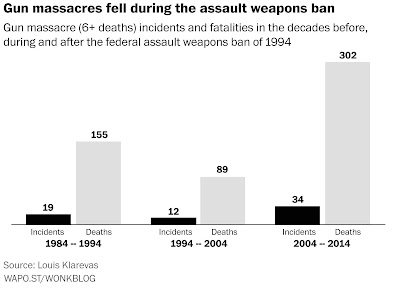 And the source comes from the conservative outlet the National Review.

We’ve already done this before, and there was no massive government erosion of privacy or civil rights. Granted, this was only a half-measure because there was no forced buy-back or confiscation. But just outlawing the active sales of these weapons curtailed the number of mass shooting fatalities. It worked.

But the gun people won’t acknowledge that. They know that rational arguments are not on their side, so instead, they pursue fantastical arguments, like the one above, that get people all riled up, despite the fact they are 100% untrue.

If we outlaw these killing machines, with buy-backs or not, and couple it with a high-capacity clip ban, the number of killings will decrease. We saw it. The numbers show it. It won’t stop every killing but when it comes to our nation’s innocent men, women and children, isn’t less killing better than more?

We don’t HAVE to make it so damned easy to kill a multitude.

And lastly, the grammarians among us would be upset if I failed to point out that the last sentence should end, “something for which you would shoot them.”

RIP
Speaking of loss of life, it was with great regret that I saw the obituary for Rik Ocasek, former singer, guitarist, and songwriter for The Cars.

When I think of The Cars, I think of summer, sunshine, good times and parties. The Cars were on the soundtrack for every party we ever threw, back when I was in college. Whenever we had a Barn Party, (and they were plentiful during the early 80s), “Let the Good Times Roll” was always the first song we played, usually while tapping the keg.

That came from their debut album, which was one of the finest ever, a practically perfect pop-rock album. Each of the first three songs on Side 1 was radio-ready gems, each timing in at 3:44. I don’t know how many copies of that cassette tape I wore out while driving to school and back.

Their second album, “Candy-O,” was another classic. I loved the big hit from that album, “Let’s Go.” It wasn’t until a good while later that I started to really dig the 3-song blend that ended Side 1, “Double Life,” Shoo-be-Doo,” and “Candy-O.” "Shoo-be-Doo" is a weird little song but I especially liked the hard transition into "Candy-O." If you’ve ever heard it, you’ll know what I mean. If not, check it out. The transition comes at 1:48.

Yes, I am easily amused.

Their next albums, “Panorama” and “Shake It Up” each had a couple of good songs, but nearly weren’t as solid as their first two albums. And then “Heartbeat City,” released during MTV’s peak, brought them back to relevance and acclaim with five Top 40 singles.

I’m glad they were inducted into the Rock and Roll Hall of Fame last year, while Ocasek was still there to accept the honors and to play a set. Granted, they were never exactly live showmen, but the songs spoke for themselves.

At one time, someone tacked a magazine ad for the first album up on one of the barn roofing beams, and it stayed there for years. I still remember the slogan on it, which perfectly encapsulated The Cars’ role in that era:

“Top-down music for a hardtop world.”

Rest in peace, Mr. Ocasek. You will be missed.
Posted by bluzdude at 6:39 PM