I usually prowl through Facebook once or twice a day and because I have a number of conservative friends, I get to see a lot of conservative propaganda and memes. You’ve probably seen me debunk these here before; it’s something I enjoy. I do this because I prefer to use Facebook as a way to keep up with friends and family I have all over the country, and not argue politics. (That’s what the blog is for.)

So as much as I’d like to get into a four-alarm flamer over some of these ridiculous claims, I really don’t want to fight with friends. I know I’ll ring a bell that can’t be unrung. Maybe one day soon, or in a time a long way off, I may reverse that position. I may decide I don’t really need quite so many friends or I may hit the breaking point on what I consider to be violations of the minimum of human decency and come out with my keyboard blazing. That will be a big day in family lore.

But for now, I tuck them away for days like today, when I can give them the attention they deserve.

It’s funny though, because there are several scenarios with these memes. Sometimes I see them and I have the gist of my response written in my head in a moment or two. These are usually ones with a glaring logical fallacy or something missing right on the surface. These make up most of the ones I find. Like this one: 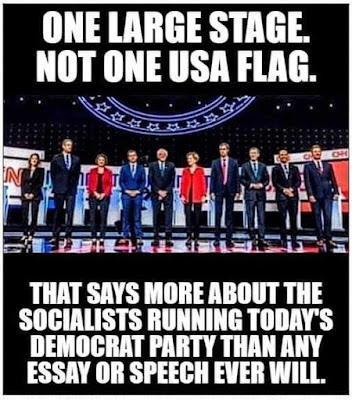 I think memes like this say more about the shallowness of the poster than any essay or speech ever will.

This is really about Easy Patriotism. It’s easy to parade the flag around and claim to be US Patriot Number One. It’s a lot harder to stand up for what the flag symbolizes… a free country where people can speak truth to power and pursue happiness in their own ways.

Conservatives give lip service to that idea, so we’re free to pursue collecting lethal military hardware, until our heart’s content. Who cares if that hobby has the potential to kill tens or hundreds of innocent people?

But pursue a same-sex relationship or marriage and you’re outta luck, despite that it has no practical effect on other people’s lives even a little bit. This “liberty” only extends to being allowed to use one’s religion to harass or deny service to people who make them feel icky. (Or unnaturally warm inside… sometimes it’s hard to tell.)

It’s also noteworthy how they set up “Socialists” as ones who oppose the flag. It’s always the fault of “Socialists,” whenever someone wants to better the situation for the average person. That’s because the rich continue to pump out this message, through Fox “News” bot farms, Breitbart, and other disinformation sources, so that they can keep the status quo going long enough to leave their ill-gotten riches to their offspring, without those pesky capital gains and estate taxes.

Anyway, I’ve probably given this meme too much attention already, considering the featherweight gravity it entails.

Another kind of meme is one where it takes a moment to figure out what their point really is. 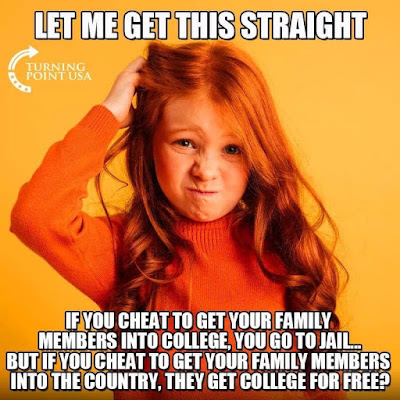 Is it anti-college? Anti-celebrity? Anti-immigration? And where are illegal immigrants getting free college? There’s no such program out there…

Then it hit me… They’re talking about the various universal free college proposals from the Democratic debates. Ahhhhhhhhh, there it is.

Here’s another way of phrasing it: “We’d rather saddle our kids (or ourselves) with a lifetime of debt and have nobody get a free college education rather than to let any illegal immigrants get them too.”

That is some industrial-strength racism, right there.

And that’s not even accounting for the favored excuse they’re only against undocumented immigration because “it’s illegal,” yet Republicans keep making it harder and harder to immigrate legally. Unless you’re from one of the white countries, that is. Then you just have to be able to sign your name, and rub your belly and pat your head at the same time. That gets you an “Einstein” visa.

Also, let’s compare and contrast. So far, getting caught cheating to get your kid into college results in a 2-week jail sentence in a minimum-security facility. Contrast that with what happens to anyone trying to immigrate across the southern border, legally or not. Family separation with sketchy odds of reunification (because they don’t bother to keep track of whose kid goes where), indefinite detention in crowded cages, no soap, shampoo or baths, minimum of food and water, and eventual redepositing back in Mexico. Are these really equitable scenarios?

And who are they even trying to kid? Republicans don’t want higher education for anyone, except white guys getting business degrees. They want the population pliable, not educated. They want us to have enough skill to do menial labor and be grateful for the crumbs we get in return. They certainly don’t want us to be smart enough to pick up on their master plans. 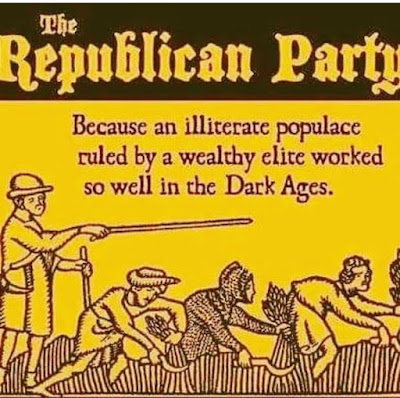 (Note: This meme is to illustrate my last point, and is not something that I'm debunking. You can't debunk what's true!)


So let me get this straight… they’re saying, “We don’t want free college if brown immigrants get it too. That way, we get to keep all the money we cheat out of the system and no one is the wiser.” Got it.

Sometimes, and this is rare, I’ll see a meme that I can’t discount on sight, like this one. 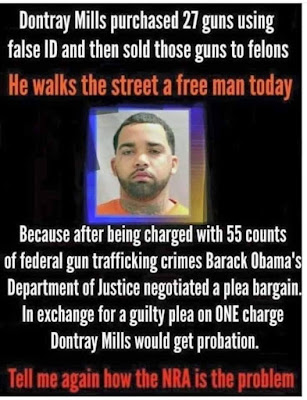 When I first saw it, I thought, “Wow that sounds bad. How could that happen?”

But I’ve learned you have to take it a step further and ask: “Is this even true? These things are never this simple. There’s always something omitted.”

Three minutes worth of research told me that was correct. (And two and a half of those minutes were spent reading the article.) Thank to you Snopes.com, who was right on it.

Snopes said that there was such a plea deal with this person, but neither Obama nor the justice department had anything to do with it. The plea deal was produced by the defendant’s attorney and approved by a federal judge, a George HW Bush appointee, to boot.

So, to summarize, this was a raging half-truth. There was such a guy who copped such a plea but the “blaming” portion of it was entirely made up, probably by the NRA, who look like they’re trying to get out from under a mountain of righteous, well-deserved blame.

This is how the Russians (and other untrustworthy social forces) win. They know that if they produce something that sounds true, the people who want to believe it will buy it completely and pass it on.

The last thing they want is for people to check on these memes with Snopes, Politifact, or any other independent fact-checking organization. Knowledge and tenacity are the only ways we beat industrial-strength persuasion tactics of these enemies of the state.

Opinions and arguments are subjective. They can be debated and called out for errors of logic. Memes like this last one are the easiest to debunk because they allege facts and facts can be looked up.

I think I may go back to Facebook and drop that Snopes link into the timeline of the person who posted that last meme. Seems I just talked myself into it.

If you see smoke coming from the internet, please send help.
Posted by bluzdude at 6:18 PM

I've always interpreted that second-to-last one as an anti-Republican meme. It refers to the way Republican policies would eventually reduce most of the American people to an "illiterate populace" of drudge workers with no rights, serving the small "wealthy elite" for which the party actually works. Nothing to do with immigration.

It IS anti-Republican... I threw that in to illustrate the sentence that came before it. I probably should had thrown a disclaimer in there, stating that "this is not a meme I'm debunking." I'm sorry if I was unclear. Time to edit...

The only Darwin Fish I've ever seen over on Facebook is in a complicated relationship, so I know that's definitely not you.(lol) Many years ago when I started Facebook after telling everyone I would NEVER join, I signed up using my married name. That's because as old fashioned as I am, I don't use my married last name in real life. Also, if I screwed anything up and said something totally out there, it wouldn't actually be attributed to RO(lol) Like you, I watch the political wars, and also the domestic abuse skirmishes, shocked that people threaten to show up at people's home, or to kill them, or many other violent acts all in the name of their cause. I could debate all day long about abuse on social media, but I know I'd be opening the floodgates of unkind words, so like you, I use my blog to give the stats. I agree, we want to keep at least one or two friends if at all possible.(lol) Hope your Saturday is amazing! By the way, I bet you were doing the happy dance when the Eagles pulled off a win against the Packers,right? That was some game! I don't need to mention that my Chiefs and Cowboys are still doing their thing! Hugs, RO

Yeah, that wouldn't have been me. After my first year of blogging, I learned to keep references to the blog off of FB.

Eagles? Meh, I don't care about them. I'm all about the other side of the state. And to make matters worse, I picked the Packers in my weekly pix. So, no happy dance for me. Both the Chiefs and Cowboys seem to be steamrolling along though, that's for sure. Glad my guys don't have to play the Chiefs this year.