We all know the story by now. In what may be a new low for this clown-shoes presidency, the Current Occupant tweeted out erroneous information on where hurricane Dorian was forecasted to go and then, surprising no one, refused to retract or acknowledge his mistake and insisted that Dorian was likely to hit a swath of Alabama.

I remember thinking how President GW Bush was the epitome of intransigence when he insisted, years into his presidency, and after 9/11 and after scores of American lives were lost in an erroneously-based Iraq War, that there was nothing he felt he could have done better.

That was nothing. This guy could trip on his shoelaces and fall flat on his pointed hair and then insist he wanted to take a closer look at the soil composition. This Alabama thing was like “covfefe” revisited, only with lives at stake.

Now, whether the report he was talking about in the unfortunate tweet was accurate or not is largely moot.

I saw that map too and examined it carefully. My parents live in the western Florida panhandle, so I was keenly aware that the direction suggested by the last two data points said that the storm could come across the peninsula, enter the Gulf, then cross the panhandle, of which Alabama wraps around the western end. 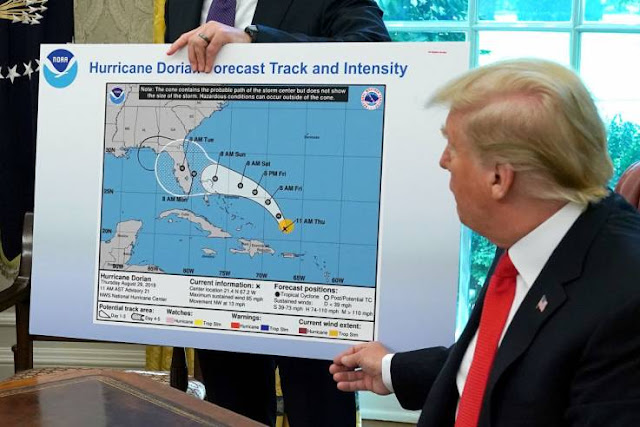 BUT… I know that the last two data points were projected and were five days out from where the eye of the storm was located. They don’t call it the “Cone of Uncertainty” for nothing. That’s why the end of the cone widens… there is a huge possible range to where the storm might go.

So I knew it was something to keep an eye on but nothing to act on yet. By that, I mean I would look at later editions of the map, which are updated on the NOAA website several times per day, and form conclusions once there was a reliable projection.

As we all know, the next iterations of the map showed a northward bend, taking the Gulf and panhandle out of play.

What Trump did was make a shaky assumption based incomplete data and then compound it by distributing the old map, long after it was updated.

Or maybe he was told the Gulf was a target during an initial briefing and then wrongly assumed that wouldn’t change in the ensuing days. Either way, he didn’t seem to know that these storm tracks can change greatly over time. Which, you’d think, as a property owner in a hurricane zone, he’d knowhow hurricane forecasts work. Maybe he already fired his toady in charge of weather.

Whichever way he came in contact with the map, it was obsolete by the time he sent it out, because hurricanes change track. That is an undeniable fact.

What a normal person does at a time like that is apologize for the confusion and then send out the correct information. But in another sign of the deranged times in which we live, he insisted that he was right, everyone else was wrong, and we owed him an apology. (Especially CNN.)

Breaking out the infamous “Sharpie Map” was just a gift to comedians and meme-sters. Did he really think the Sharpie Addendum made his assertions more “official?” All he really had to do was preface his remarks by saying, “I hereby…”

At first, the weather professionals at National Weather Service acted the part by correcting his misinformation within 20 minutes. Boy, did that get Trump riled up. The boss doesn’t like to be contradicted by anyone, experts included.

Then I suppose he found out that NOAA is a government agency so he put the screws to the figurehead in charge, who then showed the spine of a true bureaucrat and issued a statement that no one within the agency is to contradict the president again.

What’s next, public lashings when it rains on his golfing days?

This kind of interference should scare the hell out of everyone. Does the weather really need to be politicized? Weather forecasting comes with a high enough margin of error, we don’t need it compounded by trying to shield the feelings of our unclothed emperor. 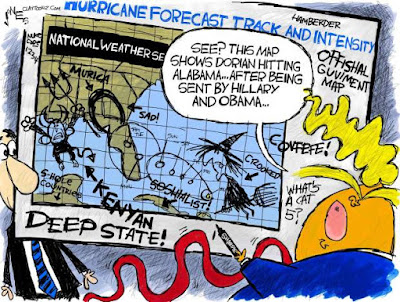 That he botched what should have been an easy piece of safety PR and then defended it is just another piece of Business as Usual. But demanding a government agency validate incorrect information (that carries life and death consequences) is what happens in dictatorships and dystopian novels about 1984.

9/10/19 Update
As "luck" would have it, there was a report today that cabinet official Wilbur Ross personally threatened the leaders of NOAA if they didn't retract their (correct) statement about the storm hitting Alabama.