I’ve seen this meme a couple of times over the holiday weekend, first, like you see it below, and later, all tarted up with graphics. I guess that meant it was approved for use by the Russian trolls. 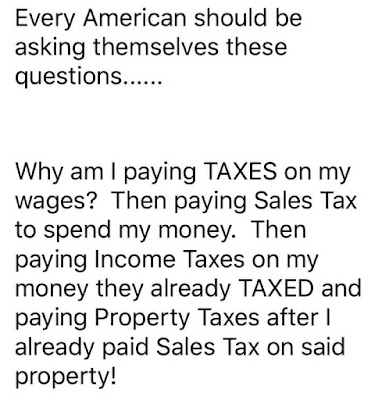 This one is irritating because it’s wrong on a couple different levels, both factually and conceptionally.

Let’s break it down.

“Why am I paying taxes on my wages?” You’re not. Your employer is paying a payroll tax. You’re paying for Social Security, so you and others can have some kind of income in your retirement. Your employer is withholding a part of your taxable income, but you don’t “pay” it until you file your returns.

“Then paying income taxes on my money they already taxed,” No, this is where your “income is taxed,” not as you said in the first statement, so there is no “already taxed.” This is the first time. And it pays for national public services like the military and national defense, federal disaster prep and response, weather services, food inspection, drug approval, business regulation, infrastructure, and a myriad of other things that make your life safer and more secure.

“and paying property taxes after I already paid sales tax on said property.” OK, you have me there. There shouldn’t be property tax in perpetuity; there’s probably some historical precedent or rationale, but the states/localities still need more dough to operate. If they didn’t charge property tax, they’d just make it up elsewhere by raising other taxes or fees. But if property tax is so offensive, you could always rent.

I think the meme-sters are getting stuck in the weeds here, in the specifics.

The bottom line is that governments need money to provide basic services for its inhabitants. No one likes paying taxes but that’s the cost we pay to live in a civilized society. It doesn’t really matter what you call each one or how you divvy it up… we pay, they provide services.

You want to argue about how the money is spent? That’s fine, although you have to get used to the idea that some money is going to be spent on things you won’t approve of. This is true for pretty much everyone in the country. No one person gets to have their money go to only things of which they approve. It’s just not possible unless the powers that be only cater to one small segment of the population.

Still want to bitch about taxes? Imagine a world if we didn’t have state and federal governments keeping things in check.

Right off the bat, without a police force or military, the mob rules. The richest among us would buy their own security forces, to keep their own belongings safe. This creates a number of competing armies, and without a massive law enforcement presence, these armies become more aggressive, moving from defense to offense. The rich guy who bought his army basically becomes a warlord. Next thing you know, we’re living in a Mad Max movie and having our disputes settled in Thunderdome.

If something gets set on fire, It burns to the ground, unless it’s on the grounds of one of the warlords and he has his own firefighting equipment (AND the plumbing infrastructure to make it work).

Small collectives can try to farm and live off the land, but there’s nothing to stop a warlord from moving in and taking everything. Or burning it all up if he can’t take it by force. Not even these individualist, self-reliant gun hoarder yahoos are going to fight off an army of similarly armed yahoos forever.

With no state or federal regulation on dumping and sewage, the water supply becomes contaminated in no time. Who is going to keep the electrical grid functioning? And if the power companies are strong enough themselves to continue to function, what’s going to stop them from charging an arm and a leg for service? And what will pass for money without a federal banking and currency system?

I’m just spit-balling here and could go on indefinitely about what can happen without governmental structure to keep the country humming. And all of that boils down to the fact that we pay taxes so we don’t have to live like savages. Our civilization breaks down in no time because man’s ego, selfishness, and greed would no longer have a brake to be applied.

Face it, the ones we have now are barely doing the job.

Homeless Thoughts Pt 1
Australian baby was born pregnant with a malformed sibling. How long before the Ohio GOP wants it immediately re-implanted? The partially formed fetus had no heart and no brain, which made it a prime candidate for Trump’s base.

Homeless Thoughts Pt 3
We got a jury summons last month but it was addressed to a former occupant of the house, who is now deceased. We had received one the month before this and Sweetpea wrote “Recipient is deceased” on the envelope and sent it back. So I was a little irritated at the lack of follow-through on the part of our court system. I figured I’d open this one up and see if there was a number I could call to straighten it out. Inside, I found the following letter. 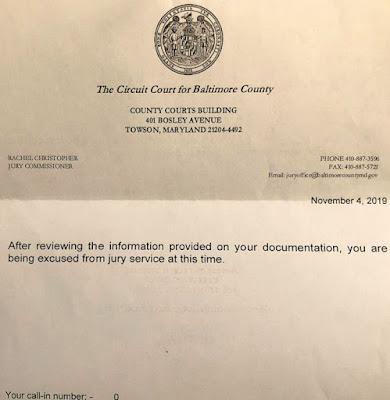 “YOU are being excused for jury service??” Who in the hell do they think they mailed this to? Our neighborhood isn’t exactly Heaven. Or Hell. Maybe purgatory…

“…at this time???” Is that going to change in the future? I guess you can’t escape jury duty even in death.

Oh these were good. You're better than a masters class.
:-)
Ever thought of running for office?

I actually have, but decided it was way too much work to get elected. I've always heard that most of a House of Representatives member's time was taken up by fundraising. When you have to run for re-election every two years, that comes with the territory. I have zero wish to engage in anything like that.

Maybe if someone in power can appoint me to something... nothing that will interfere with watching hockey and football, but something where I could drop in, raise some hell, and ease back out, I might be interested. ;o)

After decades of hearing Republicans whine "Gubmint is the problem" - this morning even 'morning Joe' admitted that his Party should stop bashing government - he cited the public servants who had testified 2 weeks ago as the perfect example of government's value to the public.

If I did business in the same manner as government does, and forced strangers to give me money, would you consider me a criminal?
If government services were valuable and the market wanted them, would they be provided on a compulsory basis?

Completely invalid comparison. Individual people or businesses are not "governments" and aren't dealt with the same way.

Citizens of a country partake in the services provided by that government, by default, save for the trope of some "rugged individualist" living off in the woods somewhere. If you use the services... roads, police protection, food and occupational safety protections, then you pay the price in taxes. There is no "opt out," without giving up said services. (Giving up services = leaving the country. Good luck finding one who allows you all the same freedoms for nothing.)

I like the GOP fantasy of the independent yeoman farmer who needs no govt services.
Then I think of that Alaskan pioneers show on cable, you know off grid no govt is "freedom"
But when the adult son on the show had to be hospitalized, no comments on who paid for his helicopter trip or to the hospital in the big bad city.
Everyone hates paying taxes. But they also hate dying because the bridge to the hospital collapsed.

Republicans exhibit the referenced whining because they are built by and for big business and the 1%, who want to make their millions and keep it all, letting the rest of the poor schmucks foot the bill for societal costs. They are against regulations, even for safety and health, because it costs them money. So they get low-information voters to parrot their company line by creating outlets like Fox "News" to promote the idea that "Gubmint" the problem.

That's precisely my point. There are very few cases where someone enjoys zero government services or features. Taxes are the cost of doing business (living) in the USA. The meme at the top is basically someone going shopping and then complaining about having to pay for their goods.

The only tax that sort of bugs me is the property tax thing after already paying sales tax, but who in the world would I complain to about it?(lol)And would they even care?(lol) So I pretty go with the program every year. As always, a really great post. Happy Friyay! RO

It's even worse in Maryland because we have something called ground rent. When you buy a house, most of the time, it's only the house and you have to pay an annual rent for the grounds on which the house sits. It's not much, but it's a constant irritation. Apparently it's a holdover from Colonial times.

Tee hee - glad being deceased will get one excused from Jury duty.