This meme encapsulates Trump’s* supporters in a nutshell: 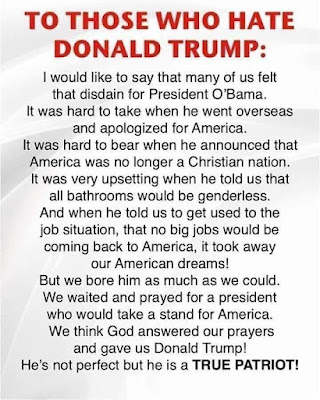 It should surprise no one that just about everything in this meme is incorrect. That comes from people buying their own bullshit or at least taking Fox “News’s” bullshit literally.

Let’s pull the wings off of this fly.

“Went overseas and apologized for America.” Standard mischaracterization. Obama wasn’t “apologizing for America,” he was apologizing for George W. Bush destabilizing the Middle East by starting a war of choice, based on false pretenses. And believe me, the next President should apologize for the disasters and disarray unleashed by the current president*.

And what’s wrong with apologizing when you’re wrong? That’s just good manners. If you think that just because “we’re America,” that we’re incapable of being wrong, then you’re too entrenched in your own political dogma to even debate. GOP never admits when they’re wrong and never apologizes for anything, because on the playground that’s a sign of weakness.

“…announced that this America was no longer a Christian nation…”
America is NOT a Christian nation. The founding fathers took great pains to omit religion from any framing document, aside from guaranteeing there would be no governmental establishment of religion or religious test to hold office. America is a nation of religious freedom, where one can be any or no religion. No president can utter any statement that changes that one way or another.

Naturally, conservatives get stuck on the part they can exploit and pretend the context never happened.

“…when he told us all bathrooms would be genderless.” What he said was that public schools had to allow transgender students to use the bathroom of their choice, or lose federal funding. Not all bathrooms, not genderless. It was an accommodation to a minuscule percentage of the student population and a kind thing to do.

Why everyone gets so upset about this issue is beyond me. My theory is that so many people have become comfortable with LGB friends and family that Republicans decided to demonize the “T,” since there are so few, by comparison.

I’m still waiting to hear about all the vicious attacks taking place in restrooms by men wearing dresses. Wasn’t a problem before this “controversy,” and it isn’t one now.

“…when he told us to get used to the job situation, that no big jobs would be coming back to America, it took away our American dreams.” That wasn’t Obama; that was the foreman in Bruce Springsteen’s “My Hometown,” back in 1984.

“Foreman said these jobs are going, boys, and they ain’t coming back…”

Blaming Obama for jobs not coming back is like blaming the rooster for announcing the coming of the dawn. Obama answered a question to the best of his ability and the answer was correct, if not popular. He basically analyzed the situation and summarized the findings. And it wasn’t difficult because this country has been on this path for decades.

But it’s been Republicans who worked so hard to destroy unions and keep wages low. And big businesses are replacing people with machines wherever possible. Other big businesses relocate their factories to other countries, where they can pay pennies on the dollar for labor.

None of that is because of anything President Obama said. It’s just the Republican way of doing business.

And I also wonder, why would you rather a president lie to you about future prospects? Is it really better to be sold a rosy tale that will never come true? (A great many must think so, given the number of people who support the current occupant.*)

“But we bore him as much as we could…” Like hell you did. President Obama was subjected to indignities never before foisted on any modern president. He had his citizenship questioned, qualifications questioned, religion questioned, was impeded and obstructed at every turn, for no other reason than he was “for” something. He had a SCOTUS nominee stonewalled for 10 months for no reason other than because they could. (Plus, said Stonewaller wouldn’t hold himself to his prior rationale if faced with that option again today.)

Fox “News” created controversies out of trivial issues, like suit colors and the quality of salutes, putting feet on desks, despite photographic evidence that his predecessors did the same things.

“We think God answered our prayers and gave us Donald Trump*.” Right. “God” put someone in office who breaks every conceivable Commandment and is the polar opposite of everything Jesus was supposed to be. No God put this charlatan in charge.

I blame the people in this country who don’t know enough to know who’s on their side and who’s taking them for chumps. It’s not the guy who slashes taxes for the rich and dismantles agencies who keep the poison out of our air and water, and keep the banks from screwing us dry. It’s not the guy who turns people on each other and vilifies the differences of anyone he can claim is “other.”

Meanwhile, the guy they claim to have “bore” reversed the downward economy and turned it around, kept the US auto industry from going under, established an agency devoted to keeping banks from cheating you with fine print and legalese, established a health care system that covered more than ever before, while keeping your kids insured and eliminating rejection due to pre-existing conditions. He saw to it than no one could be discriminated against based on the conditions with which they were born. Oh, and he had Osama bin Laden hunted down and killed.

The only thing he did wrong was accomplish all these things while being black.

Meanwhile, you celebrate a buffoon who’s never been successful at anything other than bullshit. He’s a literal laughing stock at meetings of world leaders. He couldn’t tell the truth if you painted it gold and stuck his name on it. He’s a functional lackey for Vladimir Putin, the real “most powerful man in the world.” He takes the side of dictators and rails against American intelligence agencies.

If this were any other Democrat they’d be marching with their little tiki torches outside the White House right now. But because it’s their guy, whatever he does is A-OK.

But I want you to remember one thing. There are people out here taking notes. There’s going to be a Democrat in office soon, whether 2020 or 2024. All this stuff that they think is no big deal right now is going to be thrown back at them when they start to complain about the next person.

All I’m going to do is hand them this… 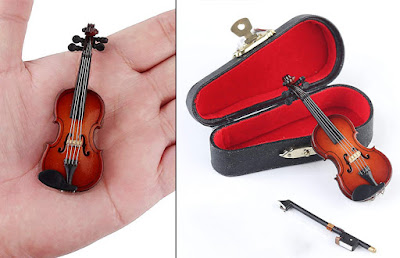 DVD Director’s Commentary: Thank you for stopping by today and every other day. I hope you have a happy and relaxing holiday week… Merry Christmas, Happy Hanukkah, Good Solstice, and happy Whatever Else You May Celebrate.

I hope you and Sweet Pea have a happy and relaxing holiday week too. Merry Christmas, Happy Hanukkah, Good Solstice, and happy Whatever Else You May Celebrate right back atcha, Mr. Bluzdude! Hugs, RO

That tells you how closely they're paying attention. And putting "TRUE PATRIOT" in all caps and boldface is basically shouting because they know the substance of what they're saying is weak and implausible.

No God put this charlatan in charge.

Well, Trump's lying is his most consistent habit, and there's a quasi-deity known as the Father of Lies.....

Thanks, RO. I appreciate the friendship we started up this year. Looking forward to the same in 2020.

Yes, Sweetpea and I are looking forward to a nice long break. Neither of us are going back to work until 1/2/20.

Yeah, he must be one of those sneaky Black Irish muslims.

Obviously, the Father of Lies has a #1 heir to the throne.

Merry Christmas hun,to your and yours. Your a very good man. I'm glad I knew you.

Same to you. Wishing you nothing but the best.

You de- winged that horseshit fly well, bluzdude! Have a happy holiday and great New Year! Keep up the good work!

Same to you, Hack!