Meat Me in Baltimore

Today I had the best work-lunch I’ve ever had.  My boss and I and her other 3 direct reports went to a Brazilian steakhouse called Fogo de Chão.  (foe-goe dee shoun) At first I thought that a “Brazilian” steakhouse would mean that the meat has all the trimmings ripped off of it with wax, but I was assured otherwise.  Fogo (not to be confused with Fubu) is a steakhouse where throughout your meal, the “gauchos” keep bringing to your table, hunks of different meats on a skewer, which they will cut off onto your plate if you so desire. 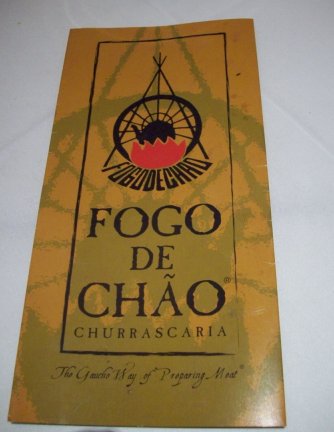 Apparently, “Churrascaria” is Brazilian for “Meat-O-freakin’-Rama.”

Holy crap, I tell you, I ate until I couldn’t move.

When you first come in, they try to misdirect you by telling you all about the salad bar.  I mostly ignored that part because it was pretty much full of vegetables.  Well, to be fair, they also had exotic cheeses and fruits, smoked salmon, salami, prosciutto, artichokes, asparagus, mushrooms, various olives and other Mediterranea. 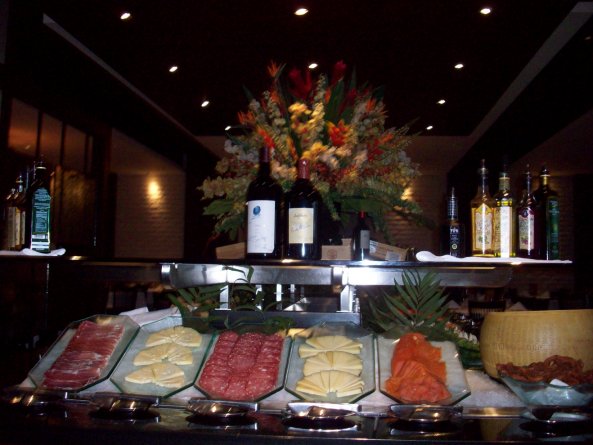 This is one of the ends.  All the veggie/fruity stuff are along the sides; this is the meat and cheese side.  You can see the giant bowl of bacon on the bottom right, which is considerably less heaping than it was when we walked in.

For someone like Cassie, the salad bar her could be a banquet in and of itself.  But as you might remember from this post, I am not a vegetable guy.  In fact, I think they’re evil.  Regardless, the last thing I want to do during an all-you-can-eat meat-a-thon is fill up the salad bar.  But they also had a giant bowl of bacon, so I had to at least give that a try, along with some cheese.  It was the meatiest bacon I’ve ever had… not greasy at all, just crispy and perfect. 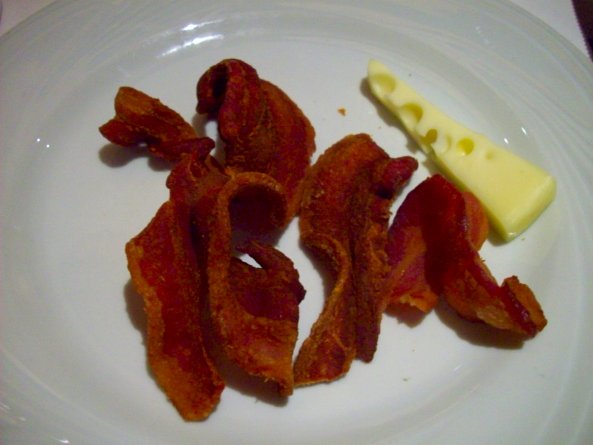 At the table, everyone has a little cardboard disc that’s red on one side and green on the other.  When you’re ready to bring on the meat, you flip the disc from red to green.  Once you do, you are treated to a steady stream of dudes bringing you giant slabs of meat on a skewer.  You can ask for any level of “done-ness” and they will carve off the appropriate piece to meet your taste.  They can even carve off whole pieces from the top part of the skewer, where you’d think you’d have to slide off whatever was on the bottom.  It was very slick. 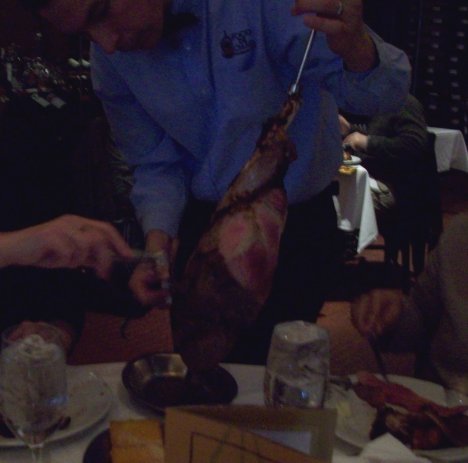 When you’ve had enough, or just want to work on what you’ve got, you flip your disc back to red.  It was all I could do, though, to remember not to put my water glass on it, like a coaster.

But you guys… it was So. Freaking. Good. 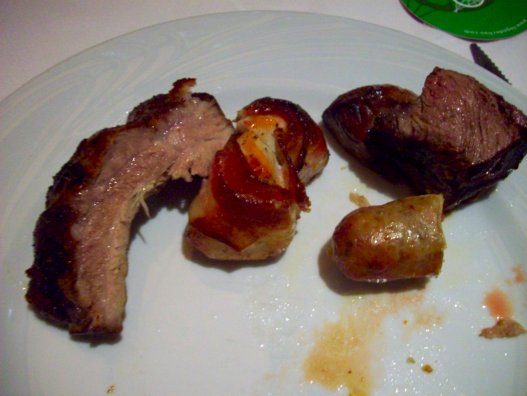 That’s a rib, bacon rolled chicken, part of a sausage, and a slice of Filet Mignon.  You can see the green disk at the upper right. 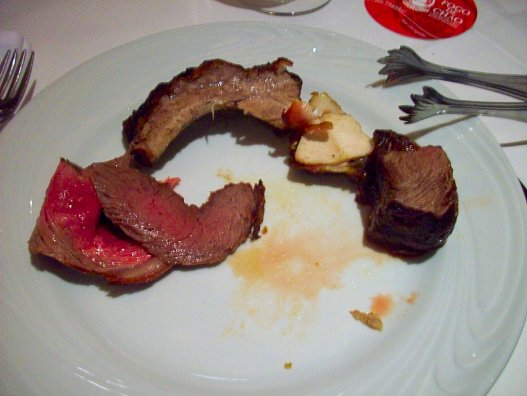 Slice of sirloin, the same rib, bacon-wrapped chicken, and the same Filet. The little 'grabbers' there at the upper right are to help the gaucho put the meat on the plate after he slices it off. Also note that the disc has been turned to red, so that I could catch up. 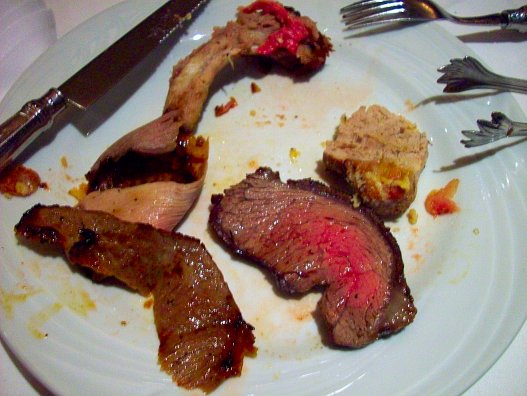 Two slices of lamb, (the rib bone), sirloin, and part of a pork loin.

I know it doesn’t look like there’s much going on here, but every time you eat a piece, a gaucho brings another option.  You rarely had very much on your plate at one time.  Each kind of meat was so good; you just had to try everything.  Also, as we learned at the end of the meal, the guys that bring out the meat are the same guys that cook it!  I wish I would have known that earlier, so I could have complimented appropriately.  Same goes for my boss.  Not only did she want to take one of the slabs of meat home, she wanted the gaucho to come and carve it off for her too.

There were so many variations… 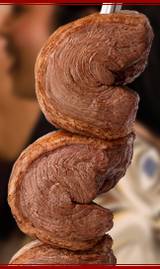 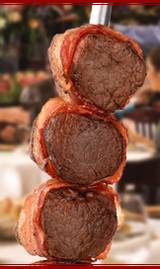 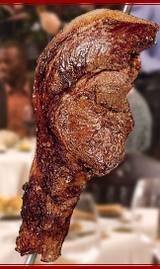 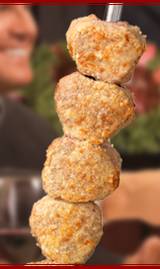 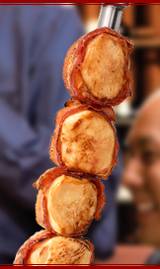 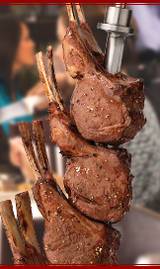 It’s not just that they were a bunch of different cuts of meat; they were all seasoned differently.  And all of them were tender and juicy… just perfect.  My favorites were the Filet Mignon and the pork loin.  And the bacon chicken.  And their “house specialty,” which was one of the sirloin options that had an unbelievable seasoning.

They also have mashed potatoes, light, fluffy cheesy rolls, polenta and caramelized plantains for the table.

As my cube-mate at work once said, “I ate ‘til I got stupid.”  I definitely did not need dinner tonight.  But boy, did I ever need a nap this afternoon…

Fogo is not cheap, but you knew that coming in.  Lunch came to about $40 per person (after tip), and that was with everyone drinking water and no desserts.

We tried to float the option of going there last year, as a group activity for the department.  But because there wasn’t the budget to pay for the whole thing, people would have to pick up part of the tab themselves.  That got the idea voted down right quick.  But we, (those that wanted to go anyway), filed the idea away for another day.  To me, $40 for the best lunch ever was a no-brainer.  Can’t wait to go again… (Like in two or three months, when this lunch has finally digested.

I had a thought as I was there… could you imagine if a football team came in for dinner?  Holy cow, Fogo would go Broke-O that night.  How much beef do you think this guy can eat? 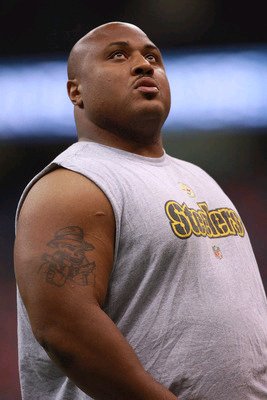 Casey Hampton, aka The Big Snack, nose tackle for the Pittsburgh Steelers.

Now add in all the other monster linemen on the team.  I bet if the guy came over with a big skewer of meat, Big Snack would go, “Just leave it, man.”

I then see him picking up the skewer and eating the meat off it like corn-on-the-cob.

Director’s DVD Commentary: Obviously, this is not a paid or requested restaurant review.  It’s just me talking about today’s lunch.  BUT, if the kind people at Fogo de Chão would care to put me on their payroll as a taster, that would be swell.

The stock pictures come from the Fogo website.
Posted by bluzdude at 7:48 PM