I can’t believe this is still controversial but my Facebook timeline is blowing up over the removal of confederate statues. I’ve never seen so many comfortable white people dig in so hard over something that would be obvious in any civilized country… that memorializing and venerating those who wished to withdraw from this country so that they could keep other human beings in perpetual servitude is not a good idea and is offensive to relatives of those who were the victims of this oppression. (As well as anyone with a conscience.)

I love it when these dingle-berries fall back on “erasing history.” For Pete’s sake, the history is still there, it is always there and always will be. What is celebrated is a different story.

I’ve covered this before, in May of 2017, and then again that August.

“I’m also tired of the argument: “But they’re removing our history!”

History should be remembered and learned from.  It doesn’t necessarily have to be commemorated.”

It’s a bullshit argument meant to deflect from the point they don’t want to make out loud… That they fear for their position of social dominance. I mean, that’s why all those confederate statues were put up in the first place, right? To let the newly freed black people know who was really still in charge.

And they see the statue thing as an extension of the Black Lives Matter protests, which makes it automatically null and void. If people would just get arrested for flimsy reasons without squirming, they wouldn’t get beaten, shot, or choked out. See? Not our fault. Blame the criminals and the media.

They Doth Protesteth Too Much, Methinks
So far it seems like everyone they find that’s responsible for protest violence turns out to be white nationalists rather than BLM folks or Antifa. I don’t know why these “Boogaloo Bois” are getting cut so much slack.

They say they’re using the protests to frame the others for violence in an attempt to light the fuse on a race war. You know who also thought committing violence to a race war was a good idea? 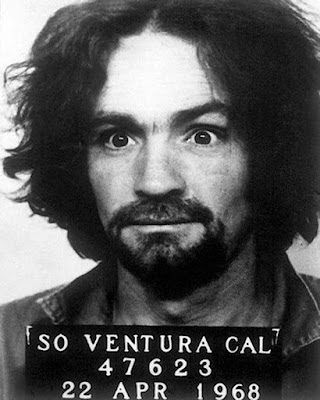 Everyone thought Manson was batshit crazy but I guess he was just ahead of his time. He would have fit right in with these “Boogaloo” assholes.

Rallying Cry
I loved seeing that empty arena in Tulsa, didn’t you? So much egg on so much face.

On one hand, I liked hearing how a bunch of teenagers threw such a monkey wrench in the mix. But on the other hand, I kind of wish they weren’t a factor so there would be one less excuse about why the place was so empty. I know they tried to blame protesters, but a plethora of witnesses attest that they never came within two blocks of the arena. No one really knows how much of a factor these Tik-Tok kids were.

It still sounds like the Trump camp should have been able to sift out the waste. It’s their own fault for hyping the numbers they were seeing. They wanted to troll blacks and liberals by commandeering Juneteeth? They just got trolled right back, to devastating effect.

Maybe for the next rally, they should ask for a credit card number. Of course, that might suppress turnout from Trump fans by another third. That is unless his tepid, tedious, whine-a-thon in Tulsa didn’t snuff it out completely.

You notice how he still hasn’t hung the portrait of Obama yet? The man couldn’t act like a president if you spotted him the “Pres” and “Dent.” (He already has the “I.”)

I think he’s missing a campaign item. Who among his base wouldn’t want to see him hang a black man? You’d think he’d be all over that one.

Conservatism in Action
I saw in the ongoing talks for the next coronavirus relief bill that Republicans want to send out a “Returning to Work” bonus, for those who have gone back to their jobs.

Is that not Republicanism personified? Giving money to those who have it. But the people who are really hurting? “Screw them… bunch’a lazy scroungers!”

Not that they really care about those just returning to work. They know that the well-to-do have been working from home all along. If they were serious about helping the rest, they'd have raised the minimum wage, but you don't see that happening, do you? As long as Republicans one house in Congress, a minimum wage hike is DOA. 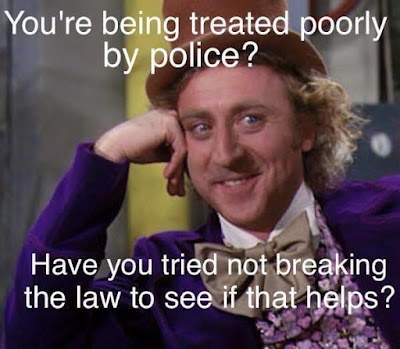 This just circles back to the protests and BLM. It’s where white people pretend that the only people getting killed are those who had it coming. They completely discount the legions of stories of police roughing up civilians for trivial reasons.

I saw a database with over 700 videos of cops blasting people, protesters mostly, who were just… protesting. Not looting, not throwing rocks, not breaking windows, but assembling in accordance with their first amendment rights and protesting.

What this comes down to with memes like this is, “As long as my friends, family and I are not being inconvenienced, the hell with anyone else. Who cares about a bunch of troublemakers?”

If these people had to spend two weeks walking in the shoes of an African-American, they’d spontaneously combust. Then there would be a nationwide run on tiki torches. 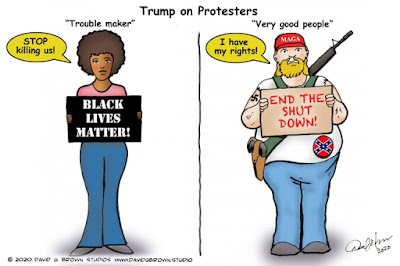 And for cryin' out loud, can we please retire the Willie Wonka meme? It's done... just done. Every time it appears, another Gene Wilder fan has an embolism.

If the Trumplings are so easily pwned by a bunch of kids on social media, no wonder they can't handle Xi and Kim. What a bunch of blundering amateurs.

As long as Republicans one house in Congress, a minimum wage hike is DOA

Then we need to make sure they no longer control one house in Congress after this election.

The campaign staff should have seen this coming a mile away, because you KNOW the kids were using fake names like Val Veeta or Sara Ann Dippity. But in their zeal to give Bunkerboy the good news he wanted to hear, much like they do with the rest of the public, they overlooked the bad parts.

As for the Senate, you're damned straight. Because even a Senate with more than 40 Republican Senators can cause huge problems in getting anything done. We have to take the Senate this year and occupy 60 seats in 2022.

I am weary from it all. The cult members of the orange ass, the idiot whites who just don't get it. The asshole who puts a noose in a good man's car/locker wherever. I am just weary.

"The Man" looks at any movement towards equality as a threat to their own power and influence, and therefore must be pushed back. It is wearying.

I read Helter Skelter years and years ago, and simply couldn't believe it, and to see him speak in person was something else. Still couldn't understand how he got so many to follow him blindly, and it was scary. I just wish there was a way I could magically get that debit card/check into the hands of the many homeless people who will never see it. Hugs, RO

Last year, I re-read the book Helter Skelter, written by the prosecutor who put them all in jail. (I’d seen a TV movie based on the book, back in the early 80s, I think, then read the book a few years later.)

What struck me the most during my re-examination of the story, was how horribly the LAPD botched the investigation. They literally had one of the murder weapons in their possession for months without knowing about it. And they neglected to investigate the area where it was found or else they would have located incriminating, bloody clothing as well. A news crew found this stash when they followed the lead themselves.

The prosecutor also lamented his troubles in getting them to, well, DO anything. He’d give them leads to check out, based on his interviews with the Manson clan or associates, then check back weeks later to find they hadn’t worked on any of them.

You’d think that a case of such notoriety would have gotten people off their butts, but they seemed entirely indifferent. It’s a wonder he got convictions on ANY of the killers, let alone the guy who never actually killed anyone himself.

The trial itself was a real three-ring circus. Because Manson was not allowed to represent himself, he hired a lawyer known for his dilatory tactics, like objecting to everything the prosecution said and did. Manson repeatedly disrupted hearings, to the point where he was forbidden from attending. He followed the proceedings from a side room.

His three co-defendants, each with their own counsel, caused numerous disruptions as well, which Manson was assumed to have orchestrated.

As a boy, I remember reading about the murders in our Time/Life Year in Review annuals. I found them fascinating as well as horrifying. It all seemed so exotic, and I guess it was. It’s not like we’ve ever seen anything like that ever since.

I guess that now that we're older it's pretty interesting to look back at how so many trials were handled, and what was missed or overlooked. I've seen so many iffy things when looking at documentaries these days. One beng the Dupont case which literally went on for years and years!!! Kudos to the lawyer who didn't give up. Hope all is well! Hugs, RO