Last week saw the outrage against police brutality continue unabated. Fortunately, the looting and violence seem to have thinned out, making way for the earnest and peaceful protest of the status quo.

By far, the biggest story was #Bunkerboy’s photo op outside the church. You can tell how his fan club got very sensitive about what a clusterfuck that was by how fast the supportive memes came out. I saw this on Facebook last Monday: 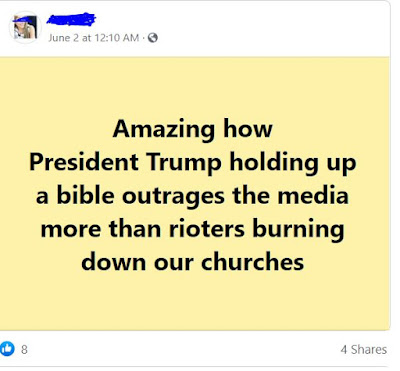 True to form, they still miss the point.

We are not outraged, necessarily about posing with the Bible. We most definitely ARE outraged about clearing a peaceful protest with tear gas (or pepper spray which may be chemical or non-chemical, who cares when it’s burning the shit out of your eyes), a half-hour before a general curfew was to go into effect.

Yes, a different crowd set fire to a church nursery (which didn’t “burn down the church”), but that wasn’t who got gassed. It’s like if you got pissed about stepping in dog poop coming out of your office downtown and then went home and kicked your neighbor’s dog. It doesn’t make you tough, it makes you a dick.

The unarmed protesters, led by officials of the church, were exercising their First
Amendment rights to free speech and assembly. Just to be clear:

First Amendment: “Congress shall make no law respecting an establishment of religion, or prohibiting the free exercise thereof; or abridging the freedom of speech, or of the press; or the right of the people peaceably to assemble, and to petition the Government for a redress of grievances.”

There’s not a lot of wiggle room there. The protesters were 100% in the right. And #Bunkerboy had them moved out with teargas by unmarked mystery forces, which turned out to be prison guards and Parks and Rec guys, which is all Bill Barr could scare up without violating more of the Constitution. All this, just to be seen as “strong,” after word got out of his hiding out in the White House bunker, with the lights off.

As far as being outraged about using the Bible as a prop, I was more disgusted by the shallowness and amused by the ham-handedness. Someone really should have taught him how to hold the damned thing.

For the record, here’s how you hold up a Bible for the crowd: 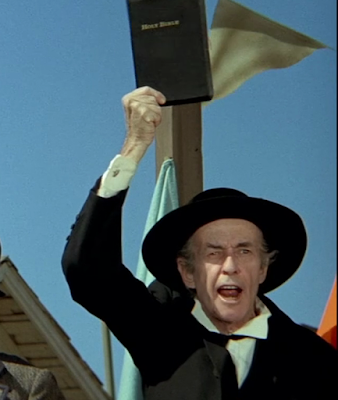 I don’t know if it’s really upside down, but it’s certainly backward, which if you think about it, totally fits. Of course he’d hold it up so it was facing himself. I’m just surprised it didn’t burn his tiny hand.

It always irks me to see memes like that and others criticizing protesters, posted by white people who would spontaneously combust if they ever had to live like Black people do every goddamned day. There wouldn’t be enough tiki torches in the world for the size of the protests that would form. I can see it now… The Million Karen March!

I wish a lot of these people could walk a mile in some of these protestor’s shoes. They just have no idea how good they have it.

I’m white and I think I know, but I probably don’t. Not fully.

But I do acknowledge and appreciate the fact that I’ve never had to fear for my life when I encounter a cop. I wrote about it once in 2016, a year after Freddy Gray, when I got pulled over for a ticket:

“Last weekend, for the first time in over 10 years, I got pulled over by a cop. I was going through my neighborhood, revved up by AC/DC on the stereo, and wasn’t sufficiently focused on what I was doing. I should have seen him up ahead, but my mind was already at the bar, which was my destination.

I was polite, and I produced my license and registration as requested.

“This is a warning,” he said. “Please be more careful.”

It never crossed my mind at the time that I could get into serious trouble. I never worried that he might come back and tell me I looked like someone who had just robbed a house, or stole a car. I never considered that he might want to look in my trunk or under my seat. I forgot all about wanting to keep my hands in sight, lest he get jittery or trigger-happy. I never worried about being cuffed, beaten, tased, or choked out.

He was calm, polite; friendly even. He joked around about the excuses he’s heard from people driving without their glasses.  Told me to “enjoy the rain” that was on the way.

I was a college-educated 50-something white male, driving a well-kept late-model car, so I reaped the benefit of the very definition of white privilege. The other time I got pulled over in Baltimore? (44 in a 30, I think.) I got a warning that time too.

I don’t think I’ve ever had a situation where I had to deal with an unreasonable cop. I mean, everything for which I’ve been pulled over, I was doing. I acted politely and professional and so did the cop.

Maybe I ran into a string of righteous cops who would have done the same for anyone.  Or, maybe none of those guys might have been the type to unnecessarily hassle black professors, ministers, politicians, or business leaders, as has happened in the past. I can’t know that… all I know is that I’ve never had a bad experience with the law.

Even that time the transit police set a trap for me because my plates were from out of state (for a year and a half).  Sure, they whacked me for $600 in fines and tickets, but they were never less than polite. And I certainly never feared for my safety.

Sure, maybe they’re just responding to my politeness and respect.  Of course, I’ve never had a reason not to be polite or respectful. I’ve never been patted down just for standing somewhere or had my car searched after a routine traffic stop.

Wouldn’t it be nice if everyone had it like that?”

I think people should keep the figurative fires burning until everybody does have it that nice.

The unarmed protesters, led by officials of the church, were exorcising their First Amendment rights

So our constitutional rights are demons now? I wasn't aware that the Episcopal church even employed exorcists.

Of course Trump doesn't know how to hold a Bible. He's probably never held a book before.

If anyone should be outraged,it's the Christians, at the Bible being used as a political prop.

Also, he was holding a modern translation generally used by liberal churches. If he knew what he was doing he'd have held up the KJV, which fundies prefer. Not that he would have a clue about such things.

Yes, Episcopalian exorcists are kind of like "Catholic Lite." They go in to expel the demons who make people leave dishes in the sink or put an empty milk carton back in the fridge. (Oh, OK, one edit coming up.)

I think this stunt is the religious equivalent of wearing a flag lapel pin to make you look patriotic. All foam, no beer.

I think I've been stopped three times. Once when a rental car had its tag in the window instead of on the back,(no ticket) once for not wearing a seatbelt(I wear that thing 100% of the time now-lol)(ticket), and once when the cop said I went through a red light, when it was clearly green.(no ticket or warning after checking my license) No cell phones back then. The world was shocked yesterday when LIVE PD, which I used to watch quite a bit, was cancelled after tape from the show depicting a man who died in custody is mysteriously missing. You and I both know that a show A&E does not throw away any of their footage, so it was surprising that Dan Abrams (who I've always liked) as an attorney would go along with this, stating that they only keep footage for 30 days, but at the request of the Williamson County, kept it for 3 months before it was destroyed. Abrams then said that looking back they wished they would have kept it, but as the Executive Producer, their intent has always been about entertainment. Huh? That's a mystery I'd like to see solved one day. Air Hugs, RO