You have to hand it to the Trumpies; no matter what happens in society, the racism is never far from the surface. And sometimes it’s right there on top. 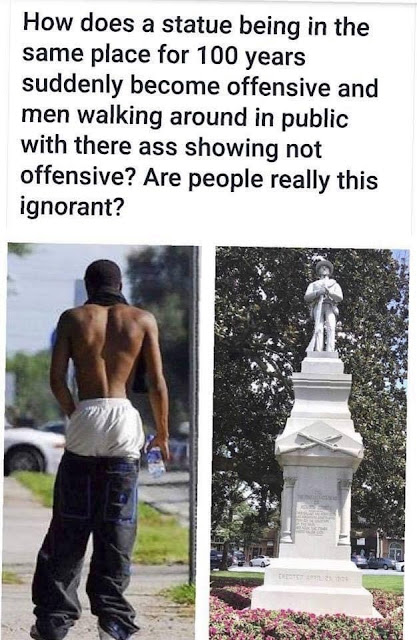 I have to admit, I’m not a fan of this “fashion statement” either. I always think back to what a former work friend, a 60-something African-American woman, once said about guys who dress like this: “Don’t nobody want to see yo stank draws!”

Is it offensive? I think it’s more dumb than offensive. Fashions of the young have always pissed off the old. These guys want to make it even harder to get a job than it already is? That’s their problem.

But is it really more offensive than placing permanent markers to honor those who fought to capture and enslave a race of people? Not hardly. Spit wad versus ICBM, as far as offensiveness goes.

“How does a statue in the same place suddenly become offensive?” Because times fuckin’ change and it’s not the 1800s anymore. I’m sure it was offensive to some people back then too, it’s just that no one cared. The popular culture today is trying to have us behave better than we used to and empathize with people who have been trampled over the years. There’s nothing wrong with that, other than for those who enjoyed the trampling and wish to continue the stampede.

Yes, some people are, indeed, that ignorant. 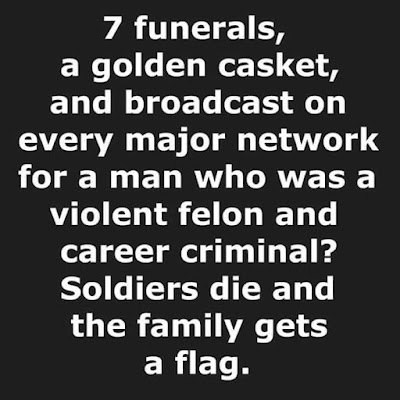 The first tipoff that this is a giant sack of racist bullshit is the use of loaded and not necessarily correct phrases. “Violent felon?” “Career criminal?” I read that he got in one scrape with a woman and had a number of drug busts for possession of small amounts of coke. Several of the busts, I saw, were conducted by an officer who was known for planting drugs on those he didn’t like (or immediately bent over for him, I suppose.) Maybe some of that career was owed to a crooked cop.

“Seven funerals?” I’m not sure where that came from. I saw one big televised event. Maybe the writer was confused by seeing the funeral on seven stations. So I’m painting the first half of this meme as a gross exaggeration.

As for the soldiers dying part… Of course it’s a tragedy when any of our troops die in battle. But is the answer to give each one 7 televised funerals when they get home? Granted, I’m sure there is a segment of the population who would love that.

The sad truth is, people who sign up for military service do so knowing that they might die in battle (or otherwise serving our country). It’s part of the deal. They’re not looking for the gaudy attentions of people they never met. They know that if all goes wrong, their loved ones can expect a knock on the door, polite condolences and a triangled flag at the funeral.

This meme is just one more person with a military fetish who wants everyone to know how patriotic they are. And if they can do so at the expense of a black man, all the better. 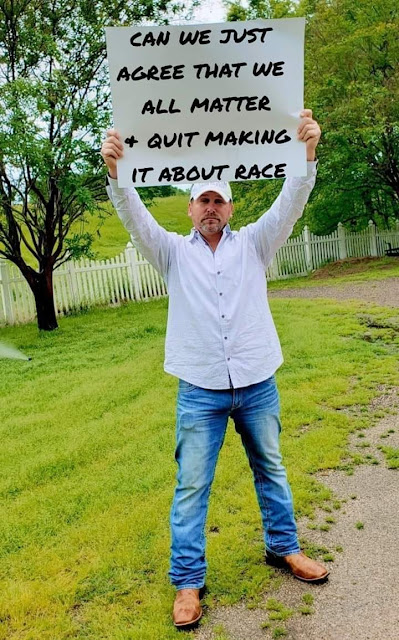 And now we come to the backdoor racism.

I’m pretty sure that sign is photoshopped*, so who knows what the sign this dude is holding up really said. So I’ll cut the guy in the picture a break. But the message is typical bullshit coming from white people who are tired of hearing about race.

It goes to the original “Black Lives Matter” fallacy about how “All Lives Matter,” with the point being that “All Lives” aren’t under siege. Like a favorite meme says, 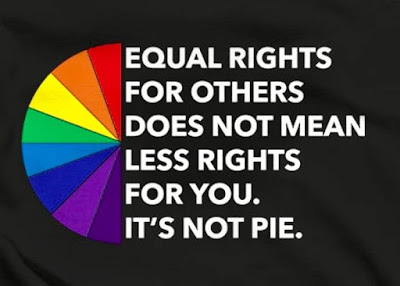 Of course all lives matter, that’s a given. But some need special attention right now because they are being harassed by cops, arrested on flimsy pretenses, killed in custody, and having white women call the police on them just for being black and existing near them. They’re shuttled into crumbling neighborhoods with dead-end schools, with few options for jobs or even fresh food. Politicians close the voting stations in their neighborhoods and require government IDs, which can be time-consuming and expensive to obtain so that it takes hours just to vote. And that helps keep things just the way they are.

So yeah, black people in this country have some legitimate grievances. So don’t be so hasty in turning the conversation back to you, Carl. (I’m proposing “Carl” as a male “Karen.” Who’s with me?)

*Look at the “A’s.” They’re all identical. Just look for any two of the same letter. You’ll see they’re exactly the same. 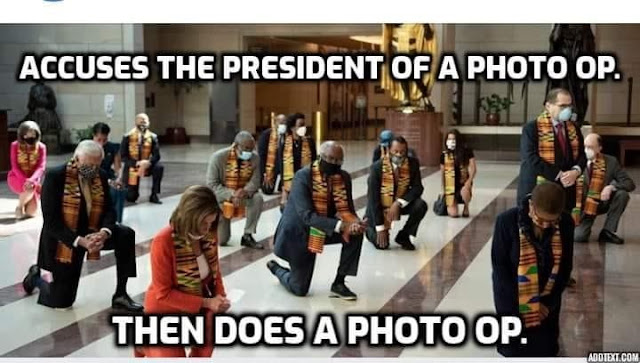 This one’s not racist, just stupid.

As I said last week, it’s not the fact that Bunkerboy had a photo op… it’s that he had peaceful protesters gassed and shot with rubber bullets to clear the space for his photo op. Not to mention his using the Bible as a photo-op prop.

But this is what conservatives do when they can’t win an argument… they misrepresent the issue until it becomes something they think they can win, hence they pretend that Democrats are upset that the president got his picture taken.

In Other News
Lest I spend the entire post in a rage, I do have a couple of odd things to share.

Last week I went into the office for the first time since 3/11. I can do about 99% of my job from home but there are a couple things that require me to be in the office, like handling parking badges and filing paperwork. So last Tuesday I ventured out into the wild blue office.

It was strange because I was literally the only person in my department (which occupies one-quarter of our floor). There were maybe 6-8 people on the whole floor.

For me, it was just like working from home, only roomier. And I got to start my day with a Dilbert binge, to make up for all the day by day calendar cartoons I missed. 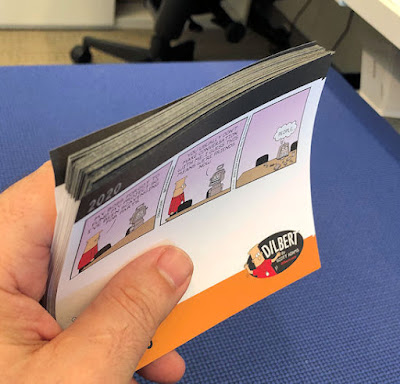 Now I should be OK until at least August.

But maybe this COVID thing is starting to turn around. I’ve been seeing some signs. Last week, while making dinner, I discovered the Infinity Calamari. 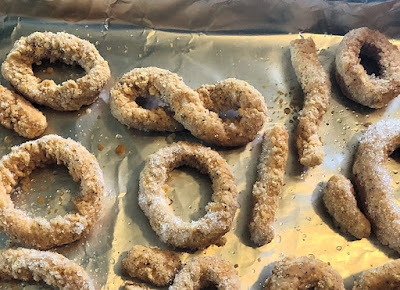 The Infinity Calamari portends the arrival of endless calamari. Unfortunately, we were not blessed with the sight of the Infinity Dipping Sauce, so our bounty was for naught.

Sweetpea was not deterred though. She immediately fashioned a seafood talisman: 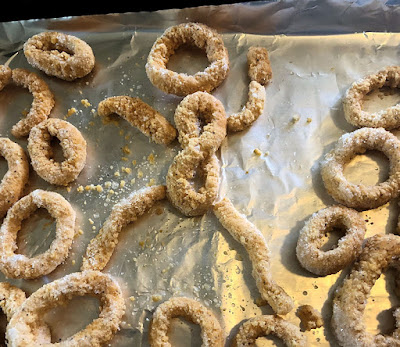 I swear, when I married her, I didn’t know she played with her food.

Just wondering, is random silliness a side effect of The “Rona?”

OMG - I'm really laughing out loud that Sweet Pea still plays with her food, and does it in such a creative way(lol) I can't say I'm a fan of Calamari no matter how it's dressed up though. I remember having a Dilbert calendar back in the day, and loved it. Then I went out to get the books instead and forgot all about the calendars. When my son was a kid, many years ago, he tried one time and one time only to wear his pants hanging off his butt.(lol) He still calls me the mom from hell when he was a kid, but he also neglects to mention the card he mailed me when he turned 25 telling me he was glad I was the way I was back then, or there was no telling where he would have ended up in life. High Five to that! Hugs to you guys, RO

Dilbert: I've been working in an office environment for the last 21 years and I consider Dilbert to be a documentary. I have so many strips tacked up on my short cube walls, all of which are applicable to various aspects of my own corporate life. Sometimes you just gotta laugh.

Kids: Never like tough parenting at the time, usually not until they have their own kids, or are around others' kids. Then they understand. (If I ever tried to go out dressed like that, my dad would have yanked those things up clear to my pancreas.)

Yes, when viewing anything from Dilbert, there will be laughter. Speaking of kids - that same son who shall remain nameless does so many of the same things with his daughter that we both can't help but laugh. I remember he used to complain because I wanted to use scented candles around the house all the time. Guess who's now the best expert on the best scented candles to buy? (lol) RO

Men should be great fans of scented candles, as they're the perfect mask for other scents that get left behind.