Ladies, welcome to your first week as a second-class citizen. Or maybe less. It now goes:

I’d like to thank all the Democrats who didn’t vote for Hillary in 2016. Fuck you very much; you allowed this to happen. There was a choice between competence and fascism, and you picked the evil carnival barker. I don’t care if she wasn’t likeable, she was the last defense against the Religious Right. If not for you, the Supreme Court would lean 6-3 to Democrat-appointed justices and Roe would have been safe for the foreseeable future. (Assuming Mitch McConnell would hold any approval hearings during the course of her term.)

I hope now you can see clearly when the next elections roll around because if the Republicans win a majority in Congress, they’ll be coming for the Blue States too, by banning all abortions. Count on it. No more Blue, safe-haven states. And then they’ll aim for birth control and same-sex marriage. Sound far-fetched? Think again. Justice Thomas already listed those as targets in his concurring opinion. That’s the agenda.

I remember back before the 2000 election, I was arguing with my (late) Republican brother-in-law. I said a vote for Bush was tantamount to ending Roe vs Wade. He disagreed, saying there was no way it would ever come to that. That’s one of many reasons I wish he were still alive. I missed out on getting to say “I totally called that.”

I don’t have much else to say on the matter… I just stated my opinion on abortion rights back in May when the leak happened, and another a week later. So you know where I stand. 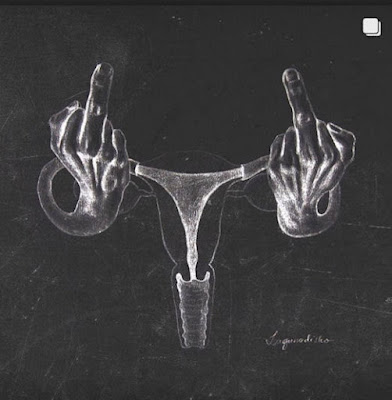 More on the Hearings

We saw a couple more January 6th hearings last week. They’re still assembling their case brick by brick. If you bothered to watch, there’s no way to dismiss TFG’s role, as well of the roles of his inner circle. They conspired to violently overturn a lawful election. There is no other conclusion to be drawn. And if there are no consequences for that, then our reign as the leaders of the free world is over. We’ll be no better than any other tin-pot dictatorship. 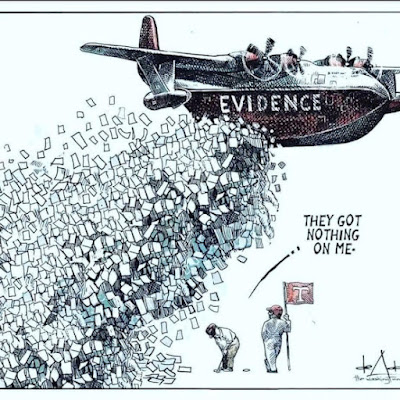 Some of the things I picked up in the hearings this week:

·        TFG’s lawyers willfully mischaracterized the raw video from the Georgia vote-counting site. They knew there was no suitcase full of ill-gotten votes, merely lawful votes stowed away because the workers were leaving and then brought back out when they were returned to stay. So every time a top official, or TFG himself talked about a suitcase full of votes, they were lying. On purpose, knowing what they were saying was a lie. The kind of lie they used to prod their followers into attacking the Capitol.

·        They ruined the lives of that poor election worker and her mom without a second’s thought. Claiming she passed around some cocaine was an especially insidious touch. I guess “ginger mints” is the new “terrorist fist bump.”

·        I’m sure flushing out long-term election workers with death threats was not an accident. It makes room for the installation of partisan hacks who WILL find 11,000 votes when asked to. Or even worse, without being asked. It’s the same with state reps, councilmen, school board members, librarians, etc. Drive them out with threats and then replace them with lackeys who owe allegiance only to the Republican Party.

After all, If TFG even farts, a bunch of armed idiots will storm in to blame the dog. Or Mike Pence, since the Trumps don’t have any pets. (That’s for the best; it keeps Don Jr. from shooting them.)

·        Listening to TFG beg for non-existent votes was nauseating. He sounded like a spoiled kid whining for a cookie right before dinner and being told no. “Just find me 11,000 votes.”

The GA Secretary of State must have been like, “Shit, that’s it? Why bother with finding votes? Why don’t I just cross Biden’s name off the winner’s document with a sharpie and write in your name, huh?”

·        Then we had Rudy asking for evidence of “USB ports.” LOL. No doubt for use on one of those fancy electronical computerization machines. I don’t know how anyone can take seriously a claim from someone who doesn’t know the difference between a port and a drive. Let’s put it into terms Rudy can understand.

When you’re lying on your back with your zipper down, waiting for a teenage girl to come in and jump you, she’s the port and you’re the drive. All clear?

o   MTG (AKA “Dyed” from the performance art duo of “Heckle and Dyed.”

I know Jordan didn’t ask specifically but he inquired about the general state of pardons for Congressional co-conspirators. There’s no way he was merely looking out for anyone but himself. To do otherwise would have been totally out of character. Just ask any of the former Ohio State wrestlers he used to coach.

Lastly, we’ll end with this: 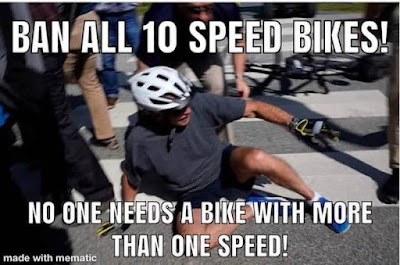 When a 10-Speed kills a dozen people in under a minute, then I’ll favor a ban on bikes. Until then, this is just more Republican deflection and false equivalency, and a handy jab at the President for being old. Can’t hurt to divert attention from the hearings, right?

But tell me, when was the last time you saw TFG on a bike? I’ll wager, “never.” The next time he does any “cardio” will be the first time unless you count walking up some steps.

“They treated me like a criminal…”, my mother said of the pharmacy giving her birth control material during the Great Depression. She married my Dad in 1931. She repeated those words, “like a criminal” to the end of her life in 1972.
Time has not changed.

I so terribly sick of this country. Last night James Cordan did a great piece on this country. And as far as this roe v wade. The point that bothers me most is that everyone is talking about whether they believe in it or not. I don't give a shit. The point should be why are you taking away my rights and liberties? If this doesn't affect you, trust me one of these that they pull will affect you. So if you're being silent a big FU.
This is not separation of church and state. I am not thrilled with Biden but anything is better than a GOP - lets get them the F out of there. I so wish I was younger, because in all honesty and we would move to another country. But sadly we can't now. Retired, you must prove you have 600K minimum for most places you wish to live. Or contribute to their society in any way. I am stuck here.

That's what's always pissed me off... the audacity of daring to decide for someone else... replacing a woman's control of her own body with that of outsiders. It's religious mania.

An excellent post... with one MAJOR oversight. Suggested revision below

1) Corporations ["they are people too!" -Mitt Romney]

5) Tie between Pets, Livestock, and Women.

Although I'm somewhat heartened that a few companies are stepping up and offering to pay for their employees' travel to non-fascist states if they need an abortion.