The third January 6th hearing was a tougher slog, not only because it was close to four hours long, but it featured the world’s most tedious speaker, Judge Luttig. Now, I realize that, as it came out later, he was intentionally speaking slowly and exactingly, to make his words crystal clear so that the meaning and importance would be noted.

But while he may have had the best intentions, watching it felt painful… like I wanted someone to go in there and finish his sentences for him. It was like, “Come on, these hearings are wordy enough as it is, let’s move it along!” It’s like his words were coming out one by one as if they were dropping off a conveyor belt directly from his brain. It’s not like he needed to sound like an auctioneer; just speak at a normal, conversational pace. It’s being recorded and people are taking notes, no one is going to miss the point (due to delivery. I’m sure there are plenty who are missing it on purpose.)

It’s funny to me how TFG’s entire strategy, as suggested by Dr. Eastman, was to interrupt what is essentially a ceremonial activity. To me, it would be like trying to get a baseball game postponed by preventing some local dignitary from throwing out the first pitch. Or the scoreboard operator refused to enter the final out, to keep the game going. The votes were placed and counted and now the game is over. It just goes to show the desperation to stay in power. And in TFG’s case, to maintain the protections of the office to keep him out of legal trouble.

This Eastman seems to be a real piece of work and typical of the kind of people with whom TFG wants to surround himself. He apparently acknowledged that his strategy would lose in the Supreme Court 9-0, even WITH the Federalist Society’s finest onboard, yet implored the crowd to act on this ridiculous scheme in his speech at the Ellipse. Same with old drunk Rudy. And they were fine with pushing lies about historical precedent because they knew that not only wouldn’t anyone in the crowd fact-check, but they absolutely wouldn’t care and would act on them regardless.

To me it sounds like the “C Street House Doctrine,” wherein conservatives are in power because of God’s will; therefore anything they do while in power is His will as well and therefore excused. They feel they can get away with anything, no matter how depraved. I guess that’s the benefit of being the Chosen Ones. Chosen by themselves.

“Do as I say, not as I do.” They should put that on the side of all the little red MAGA hats.

Did you hear that quote about what TFG said to Pence while pressuring him to break the law?

“I don’t want to be your friend anymore” if you don’t do this.

I haven’t heard such pathetic mewling since my early grade-school days. I bet he also told Pence he wouldn’t sit by him on the bus anymore either. The man has the intellectual and emotional capacity of a child. And people want him to run the country… SMH.

It was amusing to me that they threw Hannity under the bus again. This time they had a text from him to the Chief of Staff Meadows about the White House counsel staff quitting if Trump forced them into compliance with his plan to have Pence refuse to certify. Not that any Fox viewers really care. But it’s one more reason sane people shouldn’t trust a word that comes out of that “news” operation.

I also want to add to the chorus of voices cautioning against the idolization of Liz Cheney. Sure, I’m glad she sees reason on the Insurrection issue, but let’s not forget, she’s still one of "them." She’s against most of the things Democrats hold dear. She wants more power residing in the States with an extremely limited federal government, mostly limited in the ways of taxing and regulating big business. She’s anti-environment, anti-consumer, and she voted with TFG and the Republicans about 90% of her time in Congress. She’s not open to Democrats’ philosophies, not by a long shot.

The best I’ll do is thank her for doing the minimum necessary to be a decent human being, by recognizing, acknowledging, and speaking out against an obvious fascist takeover attempt.

I just wonder what she thinks she’s going to get out of it. She’s a pariah now with the Republican leadership and base. She doesn’t vote like a Democrat. Who’s left? Are there really enough independents in Wyoming to support a re-election bid? It’s sad that in this era, I can’t fathom her, or any politician, doing something purely selfless merely because it’s the right thing to do. There has to be an angle. I just don’t know what it is.

There should be a new hearing tomorrow morning, as far as I know. I’ll have to DVR it again. Please give no weight to the reports people were no longer interested because the ratings plunged after the first hearing. Remember that the first one was in prime time and the rest were on during the day when people are working. There’s no way the ratings were going to stay the same. Now if the final hearing, scheduled for Thursday night at 8:00, tanks in the ratings, at least you have an apples-to-apples comparison.

(Late edit: It looks like the Thursday hearing will be at 1:00, so more comparisons to opening night.)

Lastly, if you see some bullshit like this on your drunk uncle’s social media page... 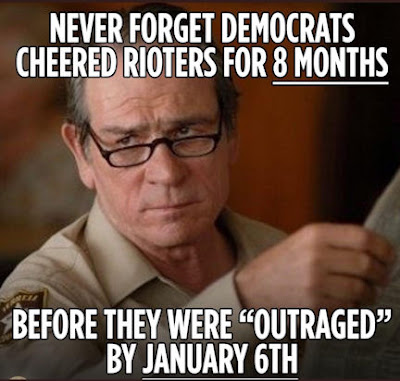 ...remind him of what false equivalency is. Are a couple of protests (not really riots, aside from Portland, which was not representative of the rest of the country), from people who are tired of getting killed by cops really on the same plane as overturning a legally executed election? Yes, I know it is if you watch Fox “News” with their constant focus on “riot porn,” but for the non-groomed, it’s not even in the same ballpark. January 6th wasn’t just an assault on the physical Capitol building, it was an assault on democracy. It was a demonstration of mob rule, with global ramifications. They can’t defend, so they deflect! This is just another attempt to shift attention away from the repugnant actions of Republicans.

And for Pete’s sake, leave old Tommy Lee Jones out of it.