Did you see this headline about Sen. Lindsey Graham from last week? I wonder if he really believes his own bullshit here…

Oh, he’s confident, is he? Seriously? Is that because millions of American women are so hair-on-fire mad at Republicans for pushing for women to have fewer rights than dead people? Is that because a referendum on the same subject got trounced in blood-red Kansas? Is that because other Republican colleagues of his are all, “Hey Lindsey, shoosh with that, will ya? Yer gonna get us killed, or worse, not re-elected.”

Unless he’s talking about his local church coffee klatch, I’m confident that a mass majority of Americans would absolutely NOT support a national ban on abortion. It makes me wonder where he’s getting his information. Is he looking at a poll of Federalist Society members? Otherwise, his statement reeks of desperately wishful thinking.

You have to wonder that when an idea is this unpopular, why would any politician go near it? That’s why prospective justices bob and weave and do anything but reveal their true intentions regarding how they would rule on abortion cases. Then after they’ve been appointed for life, they can get on with reducing American women to the level of “breeding livestock.” But they don’t lead with that, for Pete’s sake. It’s bad for business.

As I’ve often said, whenever conservatives want to squash an idea, they just drag out the issue of homeless veterans… not to provide homes, obviously, but to use them as a blockade against anything that costs money or benefits someone they deem undesirable. So here we are again: 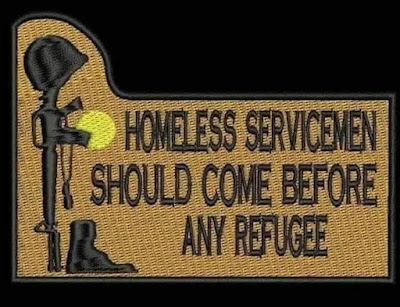 I saw this posted on Facebook. I’m not sure if it’s a patch or a doormat, with the latter being applicable to the way Republicans figuratively step on veterans to prevent anything beneficial from happening to anyone else.

My usual reaction is that this isn’t a binary equation. There’s no reason the government can‘t do something for both veterans AND asylum seekers. We don't have to decide on one over the other.

Republicans had two years of unrestricted power. If they wanted to do something for veterans, they could have. But what did they do? They passed a massive tax cut for the richest among us and made it permanent. Then they tossed some tax cut scraps to the rest of us, and set it to expire after seven years. And that’s about it. They did diddley-squat for homeless veterans when they had the chance.

And hell, Republicans had to be shamed into supporting health care for veterans and 9/11 first responders last month. Their initial action was to shoot it down as payback for the Democrats having the gall to pass a bill Republicans didn’t like. Then Jon Stewart raised enough of a ruckus about it that they had to turn tail and reverse themselves.

This ties in with the Republican trope of using people’s lives as pieces on a board to play an inhuman game of chess. On one side, homeless veterans; on the other, asylum-seeking immigrants, locked into a perpetually stalemated game that no one ever wins. Except for the rich, who rigged the board in the first place, keeping us moving against each other while they pad their bottom lines.

I guarantee you this. If the Democrats ever proposed something to provide housing to every homeless veteran, (and they should!), Republicans would find a reason to block that too, probably while ranting against handouts and socialism. They’d accuse Democrats of political gamesmanship because they only recognize the games they’ve already fixed.

Here’s another angle on why providing homes for homeless vets would never fly: It would be unfair to the rest of the veterans who already bought their own homes. In fact, we may have already heard this argument a time or two, haven’t we?

Why Can’t We Just Go Straight to Jet Packs?

One of my conservative FB friends posted this on her timeline: 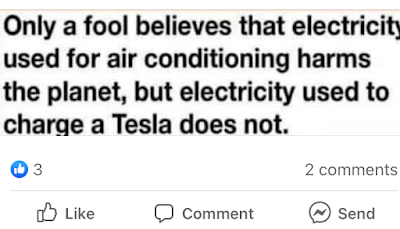 I just wonder where this even comes from. Is there a bloc of people raging against the A/C? I’ve never heard such a thing. I’m pretty sure it’s not coming from the mainstream.

But regardless, this is still another example of the Fossil Fuel industry sowing the seeds of misinformation to be spread by conservatives, to try to stamp out the momentum driving toward electric cars. They always seem to want to point out that it takes energy and possible earthly harm to create machines that reduce or eliminate emissions. And I’ll even concede that point, to an extent.

It takes energy to make both a gas-powered car and an electric one. See, both are on an even footing. But then take a look after the cars are built. One operates far more fuel efficient and the other continues to emit exhaust into the atmosphere and continues to require fuel that has to be pumped from the ground and highly refined, which also carries environmental harm.

Yes, electric cars require electricity, but that can be made with far less damage done to the atmosphere. There’s wind, solar, and even nuclear, that when done properly, are more environmentally friendly than drilling for oil and refining it into gasoline. But that’s the last thing the Fossil Fuel industry wants you to think about. They know they’re on the way out and they’re doing everything in their power to delay that from happening.

America needs to get off its collective ass and make progress with creating renewable energy sources. The tech is there, the conditions are there, we just need the collective will to make it happen.

Taking the News by Storm

I love it when hurricane season brings storms with the same name as people I know. I remember a while back when there was a famous storm with the same name as my ex-wife. I was totally on the lookout for clippings I could send her as the storm-ravaged her home state. But I never found anything compelling… most headlines referenced “Hurricane X” or “Tropical Storm X” rather than just “X Destroys Valuable Beachfront Property.” I was probably better off without it though. I doubt she would have accepted the clippings in the spirit I would have intended.

But this morning, I found a headline that I could use on someone else, so I tagged my cousin with it on FB. 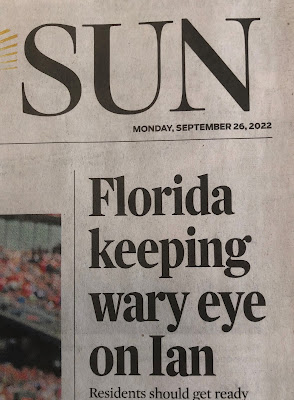 That cracked my shit up as soon as I saw it this morning.

Ian appreciated it and wrote back about something similar his family had done regarding his father: 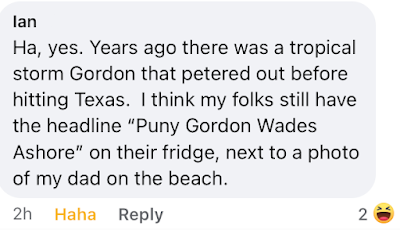 It’s even funnier because his dad is probably 150 lbs of bone and gristle. He could have had a fine career as a spy because he’d only have to turn sideways to he’d disappear from sight.

Lastly, just because this bluzdude has a birthday coming up this weekend: 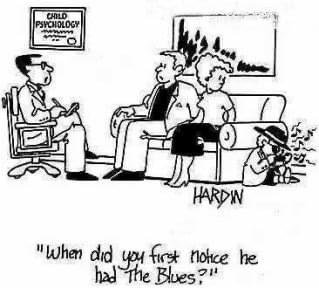 First, Happy Birthday my Friend. As for all the astute observations, well, we're unanimous in our opinions of all of it. The Son was showing me a clip of the latest 45 Rally where he set up his Base predictably and then pretending that his use of the term 'The N-Word' was merely referring to Nuclear... bullshit, he knew what his Devotees would blurt out, they're such an easy set-up for him to manipulate and gin up just the way he wants them to respond to his dog whistles and old tropes. And it cracks me up that wannabe Fascists are so disparaging of Socialism... and don't see themselves as Extremists at all, but alleged 'Patriots'... fuuuuuuck... if only natural selection had been more successful of culling that herd. *Eye Roll*

The fascists always wrap themselves in the trappings of being the hero, the Patriot; that's what sells it to the masses, who desperately want to believe it.

I believe Miss Lindsay is just jealous of the women who are still within their childbearing years. Hitting menopause was hard to swallow for the still single Miss Lindsay.