This kind of correlates with Monday’s post that featured a bit about how kids now get graduation celebrations at every interval of their scholastic careers and trophies basically just for participating in sports.  I think that dilutes the importance of actually accomplishing anything like graduating high school or college, or winning some kind of tournament or championship.
But closer to home, I wonder what the prevailing theory is on this:  Grownups, do you let kids win when you play against them at home?  For me, I tend to think that you shouldn’t.  (Yes, this is a post from another childless douche with big opinions on how other people’s kids should be raised.)
I may not have kids, but I used to be one and my dad never let us win at anything.  I remember being in maybe 1st or 2nd grade and I had this little tic-tac-toe game with pegs on a board and I must have played my dad about a zillion games and I never once beat him.
As we got older, played a lot of ball games with each other.  We almost always had a basketball hoop in the driveway, no matter where we lived.  We didn’t necessarily play one-on-one, but we played a lot of H-O-R-S-E.  Dad still kicked our asses.
Now Dad was not a tall guy… he was 5’8” in his best days and has been shrinking ever since.  I was taller than he was by 9th grade.  By the next year, I was a lot taller and it still took me a real tussle to beat him at H-O-R-S-E.  He’d just sit back in the far corner of our “court” and sink one two-hand set shot after another.
Sometimes I’d say, “You better watch out, Dad, I’m getting bigger than you.”
He’s say, “Taller.  You’re getting taller than me.  You’ll never be bigger.”
There was a time in the late 70’s where racquetball got real big.  We got a family membership at a new local racquetball club so Dad had the opportunity to kick our asses at a whole new sport.  He, my brother Ed and I would play these 3-way “cut-throat” games and between the two of us, still couldn’t beat him.  He’d always hit these kill shots that would just die in the corner and there was nothing we could do about it.  It was like the tee-shirts used to say, “Age and treachery will always overcome youth and exuberance.”
But we stuck at it and began to learn how to compensate.  By this time, I was about 6’3” and could cover a lot of ground, and eventually, I could hit my own kill shots.  Plus, I could play closer to the wall and he would have a hard time getting the balls over my head.  (I still had some hops, back then.)
Finally, I won a game.  Man, that was huge to me.  I finally beat the Old Man at something.  Soon after, my brother starting winning as well.  And shortly after that, Dad stopped playing us.  It was like he was saying, “My work here is done.  Now go forth and whup ass.”
See, this was a real milestone to me and it never could have happened if he had just let us win at things throughout our childhood.  Perhaps it’s just wanting to reinforce the notion that the parents are always one step ahead.  If I’d always won at things, regardless of smarts or skill, perhaps it would have lowered him in my eyes.  Next thing I know, I’m Little Prince Shithead, acting all dismissive of my parents and being a general pain in the ass because I think I’m all that.
I’ve seen it happen before.  Back when I was married, (cold chill runs down back,) I had a stepson to deal with.  As I’ve mentioned before, the kid and his mom had some real problems with each other.  And to add to the stack, the kid always had to win at everything or else he’d whine and cry.  And when he “won”, he’d gloat like crazy.  Obviously, that grew to become a conflict that colored everything any time we tried to play a game, from street hockey to Monopoly.
I mean, if Future Ex or I landed on Boardwalk or Park Place, he’d throw a fit if we dared buy it before he could.    If we rolled the dice and our move landed us past his property, he’d whine and sulk.  And if he wasn’t winning soon enough, he’d start cheating.
I have no doubt that kid’s in therapy somewhere today.
Anyway, now I’m at the point where I’m playing with my nephews whenever I come to visit.  I’m not sure what my brother does, but I still use the same philosophy my dad did.
Last weekend, I was playing football with 4-year old Sammy, our game being that he had the ball and had to run past me.  The first play, he came at me and I lowered my forearm and blasted him into the ground, then jumped on him.
Nah, just kidding… I’d just move laterally and reach out to scoop him up, turn him upside down, put him down again and stuff the football up the back of his shirt, to send him back to try again.  It was fun for both of us.  But I still was not about to let him run by me.  Even when big newly graduated brother Daniel tried to come in and block for him.  Then I’d latch onto Daniel, push him back into Sammy, then grab them both up and take the ball.  Old age and treachery… 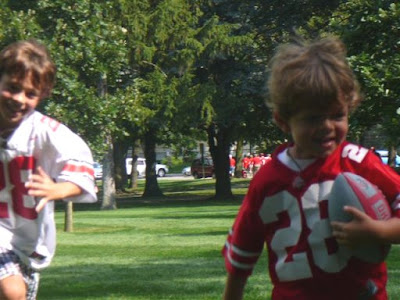 Daniel and Sammy play ball on the OSU campus before the Navy game last September.
They got the last laugh, though.  I was totally wiped out Monday morning.  Youth and exuberance does have its benefits.  I have no doubt that one day, I will not be able to catch Daniel if he decides to run around me.  Or Sammy will give me a shoulder and knock me flat on my back.  But Uncle Bluz never dives. They’re going to have to earn it.  .
It’s already happened to me once before.  My buddy Rik’s daughter Kyrie once challenged me to a race.  This was in 2003 and she was about 8.  She was playing soccer and thought she was pretty quick, so as we were sitting around the back yard having a few beers early one evening, (me, not her) she said, “Uncle Bluz, I bet I can beat you in a race around the house.” 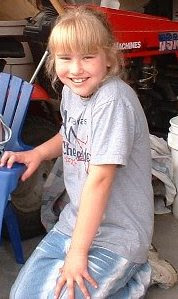 I figured, my long legs versus her little ones would be no contest.  Little did I know, this was yet another time that kid played me for a sucker.
We took off and as we hit the first corner dead even, I realized that this might be a problem because I don’t corner so well.  She scooted around the corner like she was on a monorail.  I caught up by the 2nd corner then zing, she catapulted around that one too.  The 3rd corner was downright ugly.
Have you ever seen one of those nature shows where the cheetah is running down one of those little dinner-antelopes and right as the cheetah pounces, the antelope zigs and the cheetah goes rolling ass over elbows across the savannah?  Well that was me.  I hit the third corner, my feet shot out from under me and I went flying along the grass like I’d just been thrown from a moving car.  Kyrie won, walking in.
Obviously I blamed it on the slick grass.  But I knew not to race Kyrie anymore, unless it was a short race and there were no turns.  (And I got a head start.)
So now I throw it to the parents… Do you let your kids win at stuff?  Or do you make them work to beat the old man (or lady)?
Posted by bluzdude at 2:21 PM