Hey there political junkies! Tired of listening to the same old excuses from the GOP whenever their Orange Idol steps on his own dick again? 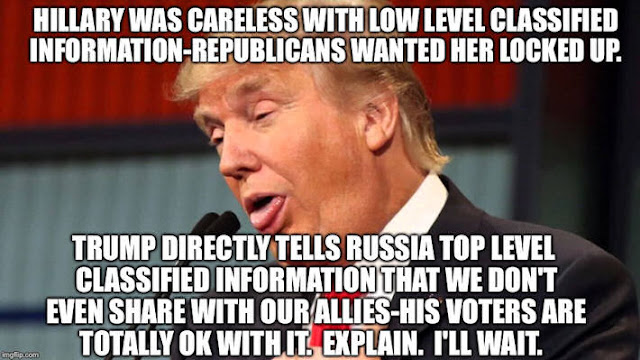 Bored with the same old outlandish lies and blatant misdirections when one of TFG’s minions spills the tea on Republicans’ actual plans? 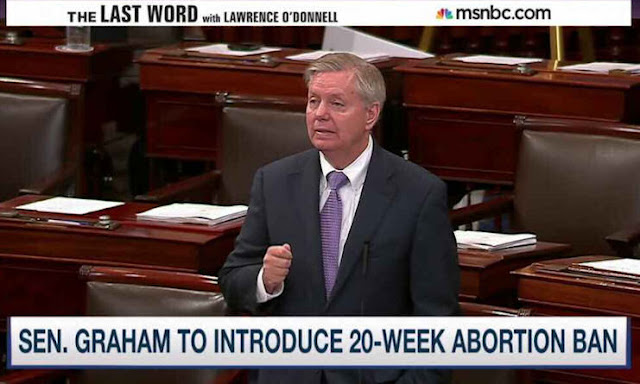 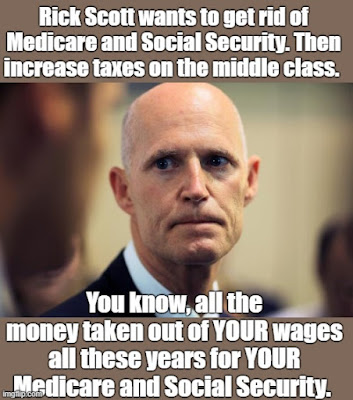 Why not make a game of it with MAGA BINGO! 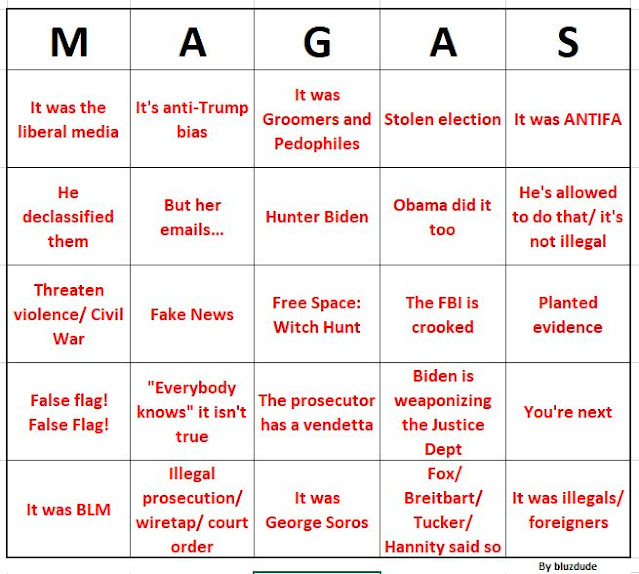 When the next news cycle brings another atrocity, just cut out your game card and start playing along! Keep track of what the MAGAs say to alibi their heroes out of hot water and win valuable prizes!*

*Prizes = Sense of pride and well-being for not falling for their bullshit.

I saw this on my Yahoo news home page last week:

It’s from Fox “News,” of course. Otherwise, they might have realized that their guy spent millions worth of taxpayer money on golf trips, the funds for which were paid directly to his own properties. Maybe Fox should pipe down about a president going to vote.

And aren’t they against mail-in voting anyway? I guarantee that if he mailed in his ballot, they’d come up with some kind of twisted story involving fraudulent ballots. Given their own loyalists’ penchant for voting in multiple places or in precincts to which they don’t belong, they should pipe down about that too. In fact, they should just pipe down about everything… they’ll raise the country’s average IQ by at least several points.

The thing is, a president has to travel by expensive means. That holds true for presidents on both sides of the political divide. It’s a sign of a dishonest argument to castigate your opponent for something your guy does even more. But my point is that it’s rolled into the cost of doing business as president. There are protocols and security issues that are above and beyond the experience of the average citizen, so most comparisons are skewed.

What the president does is important. He should be setting a good example. Being seen in the process of voting is good for the country because it promotes an important civic duty. But then the LAST thing Republicans want is for the unwashed masses to actually vote, especially in person. That takes a whole area of fraud accusations off the table. That’s why restrict the number of voting machines in urban areas and pass laws forbidding the distribution of food or water to people in the lines they just legislated into existence. And speaking of, look at this local issue:

This is from this morning’s newspaper. Dan Cox is a Trumpian, “Big Lie” supporting wingnut who won the Republican nomination for governor, without the backing of the current Republican governor, who thinks he’s a wackadoo. He did enjoy the support of the Democrats though, who spent money on ad buys backing him, because they couldn’t wait to run against this guy.

Remember how the Republicans and the conservative media outlets spent weeks decrying how long it took to count mail-in votes and because of that time delay, insisted it was proof of fraud? I don’t think they want to give up that particular rallying cry, otherwise, authorizing the advance or same-day counting of mail-in votes is a no-brainer. What possible benefit is there to holding off counting the votes? I can’t think of a single up-side, especially when everyone wants results and decisions immediately, Republicans included. But, even more, they want their excuse to protest any election they don’t win. This guy is just trying to keep his alibis in play.

I was appalled at the crass gamesmanship employed by Florida Man Ron DeSantis, who borrowed some asylum applicants from Texas and flew them to Martha’s Vineyard on the taxpayers’ dime. ($12 million worth of dimes.)

I haven’t seen such a denial of status as a human being since the Knights jumped the Queen in History of the World Pt 1.

Mel Brooks was joking, but DeSantis is not.

The MAGA adherents he’s trying to inherit from TFG love this kind of thing… it’s red meat for them. Immigrants are sub-human to them anyway so this is nothing. They’re probably patting themselves on the back for giving these people their first plane ride.

What they didn’t get right is the thought of any Lib-owning. 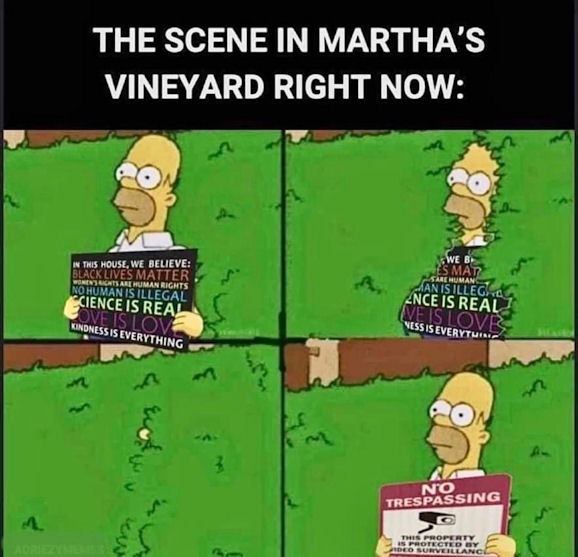 Nothing like this remotely happened. They thought the hoity-toities of the Vineyard would get huffy about it, and they might have if there were even there. But this is “off-season.” Most of the hoities have left, leaving only the common toities to deal with the influx. And that, they did. They got them set up with beds and meals and are working out what to do long-term. DeSantis apparently couldn’t be bothered to even check if the people he was trying to prank were home.

What DeSantis did, with the help of Governor Abbott from Texas, is basically kidnapping. They got them onboard this plane with promises of jobs and quarters, without even bothering to let anyone know they were coming. It was like they were dumping an unwanted dog on somebody’s farm. Or like some big prank, only instead of a stack of pizzas showing up, it was thirty poor, scared, immigrants trying to flee terrorists and criminals. Sounds like they got out of Texas just in time.

The other thing that gets me is that this isn’t even a Florida concern. If he wants to round up some immigrants, let him burrow into his state’s Cuban communities. What the hell did he do, ring up Abbott and ask if he could borrow a cup of Venezuelans? But he just wanted in on some of the good MAGA PR that Abbott was getting. This was nothing but a photo op. And you can tell that for sure because Fox “News” knew they were showing up and sent a camera crew. How is it that they knew but no one from the state or town knew? It’s because the most important thing was that Fox “News” got a story and some footage.

Both “men” disgust me, and it disgusts me even more that there are people who cheer them on.

BTW: The Orange Menace could never step on his own Dick, have you seen how little his Hands are? *Winks*

I figured he has someone do it for him.