Just a quick note to hold you for the weekend…
My parents are celebrating their 50th anniversary (again!) by having a big dinner in Pittsburgh for the extended family.  Both sides of the family will be represented and that’s a pretty big deal.  My mom’s brother and sister are in California and North Carolina respectively, we don’t all get together very often.
Then on Sunday, it’s the long-awaited Darwinfish Fry, where a bunch of Pittsburgh bloggers and I will meet up, hang out and see if we’re as wonderful in person as we are on line.  Trust me, there will be a full report… probably several.
So I’ll be heading out for The Burgh within the hour… my first extended ride in the new car.  The oil has been changed, everything’s clean, I replaced the air filter, washer fluid is topped off, and I have a whole fistful of directions.  Someday I’ll get that GPS.
I’m always uneasy about driving in Pittsburgh and today’s journey is complicated by road construction all along my usual route, so I have to improvise.  I hate to improvise, especially there, where roads don’t run parallel to each other and you can never “just turn around and go back the way you came… too many one-way streets.
Luckily I got some solid advice from Cassie, of Sisters from Different Misters.  So if I get lost, it’s her fault.
I may be able to throw up a post (so to speak) over the weekend, but I doubt it.  I probably won’t be able to post again until I’m home, Tuesday night.  But we’ll see.  In the meantime, be sure you’ve read the last couple of posts… they’ve been some corkers.  Nothing like the tales of juvenile debauchery to stir the soul.
Until next week, Bluz…. OUT! 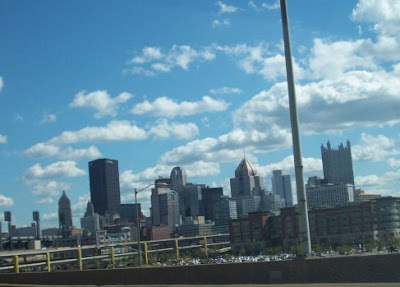 Be safe. I can't wait for the report!!

Have a great time! It sounds like a lot of fun.

Can't wait to meet you on Sunday...All the Bitches are super excited...Its on like donkey kong!

That is so cool about your parents. Mine are celebrating #42 in August and my grandparents celebrating #66 in Sept. 66 years with the same person - that's amazing.

Have fun in Pittsburgh!

Have a fantastic time!

Don't do anything we wouldn't do...unless, of course, you plan to document it with photos.

Dude, solid is solid. If you get lost, it's user error!

@BG, I'll have my fancy camera. So don't worry about documentation.

And I thought the 4 year old's birthday party I'm going to Sunday morning was going to be a treat.

All,
Got into the Burgh uneventfully. Cassie, Rt 28 worked out fine. Was pretty jammy going through town but I called an "audible" and instead of going through the Ft Pitt Tunnel, I decided to go up 51 and "go through The Rocks", this time, on purpose!

I scoped out Anthony Jr's and it looks fine. There's metered parking across the street, but I hear-tell that they don't need to be fed on Sundays.

Can't wait to meet everyone!