As it turned out, getting the Concorde registered was a breeze.  It took me longer to get there (about an hour) than it took me to walk in and out (45 minutes).  Funny thing was, I almost smashed my car on the way.
I was cruising around the Baltimore Beltway and wondering where all the rush hour traffic was.  It was smooth sailing for the first 5 minutes, then as I began to round one of the bends I saw this car kind of dawdling along.  I though, “what the hell is up with this moron?  I better swing around his ass.”
Then right as I came out of the bend I could see a wall of unmoving cars.  Gaaaaaahhh!
As I stood on the brake and checked my mirror to see if it was clear to swerve, I realize I must have looked like a panic-stricken cartoon. 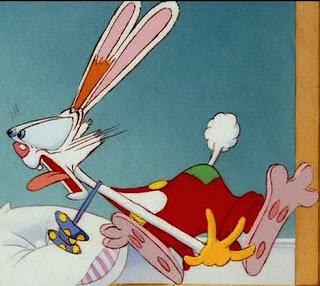 The car has pretty good brakes and I was able to stop in time.  But that didn’t mean my heart didn’t jump to about 100 mph…
The Maryland MVA is a huge complex and I never know where to go.  There are numerous stations and God forbid you camp out in front of the wrong one.  But they have an information desk that you visit first and get a number.  There, a helpful senior citizen checked my paperwork, told me what to fill out and where to sign, gave me a number and pointed my toward the correct wall of stations.  There, I could follow what numbers were being served and calculate how long it would take me.
Once I got called up, it took about 5 minutes before I was duly registered and had new plates in hand.
This afternoon, I went to sell the Neon at CarMax.  You could have knocked me over with a feather when they offered me $1000 more than I was expecting (and $800 over Kelly Blue Book trade-in value).  I couldn’t spit out the words “I’ll take it” fast enough.  They were giving me about 75% of what I spent on the Concorde.  Good thing I didn’t smash it up going to the MVA. 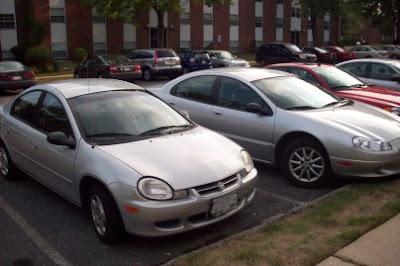 Goodbye, dear Neon.  You served me well.  Here’s to hoping your big sister (on the right) can give me another 8 years.
Earth Shaking Revelations
Out here in the mid-Atlantic region, we had an earthquake at 5:05 AM Friday morning, that was about 3.5 on the Richter Scale.  That was the strongest one ever recorded in these parts.
I never noticed it.  The funny thing was that I woke up just before that.  I popped an eye open and saw that it was 5:01, leapt for joy inside and immediately went back to sleep.  I never knew about the quake until the news came on with my alarm at 6:00.
One time before I felt the effects of a quake and that was back in Ohio in the early 80’s.  It was a just a little rumbler like this one was.
I was sitting on the living room floor, playing records on the family stereo before I had to leave for class.  I used to love playing records when no one was home because that was the only time I could really turn it up.  So I was sitting there and I looked over at the glass fireplace cover and saw it was shaking.  Then I looked back over my shoulder and saw my mom’s easy chair rocking a little bit, as if someone had just gotten up from it.
I thought to myself, “I guess it’s a little loud in here,” and turned the stereo down.
I never knew it was an earthquake until I got to school later that day.  Until then, I was giving our speakers way too much credit.
The Mojo Boogie – Prehistoric Edition
This is a great reason to start looking for dinosaur bones; if you find something new, you get to name it.  But unfortunately for me, the coolest name ever has just been taken.  Introducing: The Mojoceratops! 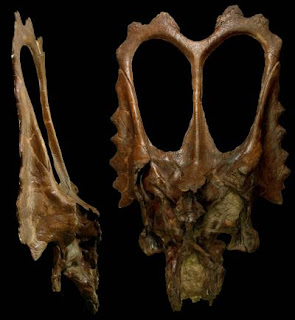 Now that’s some Mojo Risin’.
The Mojoceratops is a relative of the better-known Triceratops, but predates it by about 10 million years.
"It was just a joke, but then everyone stopped and looked at each other and said, 'Wait — that actually sounds cool,' " says Nicholas Longrich, the Yale University post-doctoral researcher that found the bones and other evidence of the unidentified species among museum collections. "I tried to come up with serious names after that, but Mojoceratops just sort of stuck."
So with that name taken, should I stumble over any unidentified dino-bones, I now have to use my second choice, “Bluzsaurus Wrecks.” 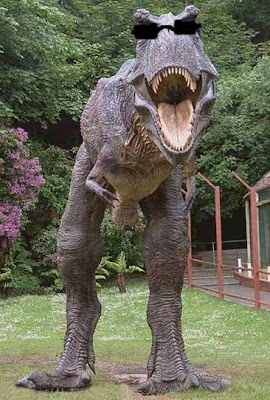 “I’m on a mission from Gaahd.”
Send in the Clowns
In other news, if I were this guy, I’d do the exact same thing.  Dude thought clowns were attacking his mother’s house so he shot the place up, inside and out.
I say, “Here here!  Cut those sneaky sons of bitches down!”
The cops say the guy was under the influence of hallucinatory drugs, but I believe him.  That’s how clowns operate… they show up on bunches and scare the shit out of unsuspecting citizens. The whole thing reeks of a cover-up.  I bet the cops found a whole array of red noses and poofy buttons laying all over the lawn when they rolled in, but deep-sixed the evidence.  They probably have clowns on the payroll as rats. 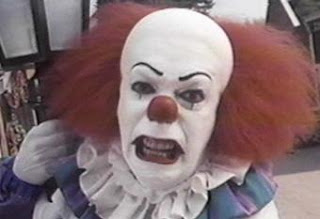 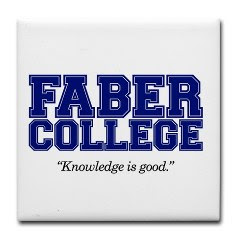 Not that you would know that by the length of my posts…
Posted by bluzdude at 7:06 PM

*head desk* clown boy was visiting his mother in Roberts...not far from where I grew up in Minnesota. Sigh.

Yah, that earthquake, some shit huh?

I want to go to the University of College Institute of Technology and Informatics.

Cassie,
That was a serious LOL...

Also, if your home town is in favor of mowing down a posse of marauding clowns, that just goes to show that you come from honorable stock.

Good deal regarding the car and all the business around it, except of course for the near-wreck! Sometimes "almost" is the most beautiful word in the English language!

I worried about my mom with the earthquake (she lives/works near DC), but she got pissed that I interrupted her when she was getting ready. I figured y'all were just fine!

I love the name "Mojosaurus", and love the story behind it!

Oh, and I'm afraid of clowns. Hate 'em. Have you ever watched Animaniacs? The "Clownophobia" episode is hilarious.

Lilo,
Yeah, the earthquake was a total non-issue, other than a new topic of conversation.

And I've never seen the Animaniacs, but if they hate clowns too, then I'm all for them.

It's okay, A FUCKING M-80 could go off outside my bedroom window and I wouldn't wake up!!!

CB,
But you have an excuse... you're driving with your knees while putting on makeup, talking on the phone and smoking.

I love it - LOVE. IT. - when I wake up before my alarm goes off, especially if it's an hour or more before I'm supposed to get up. It makes me feel like I've beaten some sort of system. Sort of...triumphant.

(Never mind that I'm the one who sets the alarm in the first place, so it's not like I'm sticking it to Big Brother or anything.)

Congrats on having a fully legal (and completely intact) Bluzmobile!

Love the dino bones story. That rocks! (get it?)

I didn't feel the earthquake. But my stack of -apparently not so well stacked- firewood did. It didn't come crashing down until Sunday afternoon though. I blame the earthquake. My wife blames my half-assed stacking job. The truth is probably somewhere in between.

Bachelor Girl,
Once, back when we lived in NW Ohio, my friend Billy (a Barn founder that moved away) was staying with us for a visit, and was staying in my brother Ed’s room. Bill came in late one night and apologized to Ed for waking him up.

Ed then made the mistake of telling Bill that he actually liked it when he woke up in the night knew that he could go back to sleep.

So every single night thereafter, Bill would come in the room, shake him and go “Eddie! Wake up! Wake up!”

Bill would say, “Nothing, now you can go back to sleep.”

Cristy,
Even an old fossil like me got that joke…

Dog,
If she didn’t like your stacking, perhaps she should go out and show you how it’s done…

Who knew we were supposed to stack firewood according to earthquake specs?

Bluz, after all you have been through I'm sure the quake was minor! Scary, but minor. Congrats on your gorgeous new car and the Darwinfish emblem! How cool is that?

Gotta tell you that clowns have always scared me. It does not surprise me in the least that this one went on a murderous rampage. I've had nightmares about them. Really! Never took my kids to a circus either. That helped put me in the Bad Mom bracket for a long time.

Good to have you back!

Freakin' clowns... As much as I always liked the movie Poltergeist, I always dreaded the bit with the clown. Used to freak me right the hell out.

You had a NEON? OMG! Did you ever own a Pinto??? HAHAHAHAHAHAHA!
I am back from Cancun, and came home horribly sick with a bronchial virus that I caught from a woman from Chicago who was coughing her brains out in the pool. She sat down next to me in the lobby while we were waiting for our transportation to the airport to come home. I gave here an evil clown smile and moved away.

Welcome home Judie and HEY, I LIKED my Neons. So lay off, they served me well. ;o)#

I never owned a Pinto but my family had one for a short while in the 70's. Luckily it didn't blow up.

Hope you feel better though...

Sorry, cowboy! I didn't mean to hurt your feelings.

I am feeling better all the time. After I shake the sand out of my brain, I will tell you all about Cancun.

I used to make fun of "Pintos" and "Pacers." Remember those? But then I owned a Chevy Citation for a long time. (Similar to a Neon, not as sporty.) And it was a great car, just not very sexy. It served me well on the road, but didn't do much in terms of the ladies. Yeah, I blame it on the car!

Judie,
You know I’m just playing with you. Looking forward to hearing about your Mexican adventures!

Guy,
Pintos, Pacers, and Gremlins… Maybe the Vega too… all were part of the same 70’s automotive nightmare… “Chick Repellent”