Odd Bits - The Back to Real Life Edition

I had another fun email string today, with blogging/real life work-friend Goldey.  Our financial services company is for sale and we were talking about the changes we’d like to make once we’re free of our parent company.

Also, I should preface this by saying that we both have an appreciation for the Chuck Norris jokes that have run amok across the Internet over the last 5 or 6 years.  For the uninitiated, they tend to glorify his martial arts and other abilities to the point of the absurd, especially the prowess and sheer volume of his roundhouse kicks to the face.

This is not to say that either of us support the man himself, who is really nothing but an aging born-again Christian/Ultra-Conservative; we just like the jokes.

I often paste this pic onto my emails to her.

Goldey: I hope the changes involve a lot of streamlining.  Seems like we have a lot of duplication now.

Maybe we could get Chuck Norris to buy us.

Bluz: I would love to see those negotiation sessions:
“We think this is a quality organization and we will not undersell our perceived valu…”
<Roundhouse kick to the face>
“Offer accepted.”

Goldey: We’d have to undergo roundhouse kick training!  And think of the benefits!  Total Gyms for everyone!

Bluz: Gathering in the lobby every morning to roundhouse kick in unison.  (ie. Dancing!)

Bluz: We’d scare the crap out of all the other financial companies in town.  They’d be totally expecting a hostile takeover… if not their companies, then all the downtown food courts.  A Flashmob of roundhouse kicking!

Goldey: We’d end up a monopoly – other banks would be scared to pay us off.  They’d be subordinating all of their accounts to us in fear.

Bluz: Just think how efficient our loan collections would become.  No calls, no letters, just show up at the door and they’ll hand us money.  Heck, we wouldn’t even have to get out of the car… we just paint up some vans with Chuck’s picture on them.  They see the Chuckmobile roll up, they run out the door with cash in hand.

Goldey: Everyone would be paid ahead.

Bluz: Just the rumor of the Chuckmobile circling the area would be enough to get those electronic payments started.

“Oh my God Honey… the neighbor says the Chuckmobile is at 4th and Main.  Get off Astrology.com, I gotta make a payment.”

Goldey: People would be signing up for Auto-Pay in fear.  Optional insurance would no longer be optional.  “Hell yes you can secure my loan with my car… You want my neighbor’s car too?  How about my first born?

Bluz: For initial recon: The Chuckblimp.  People looking in the sky and running in fear, as if from Godzilla.

You know I’m totally using this stuff tonight, don’t you?

Goldey: But of course.

OH NO!  IT’S GODZIRRA!  NO! IT’S NOT GODZIRRA!  IT’S CHUCKBLIMP!  MUST MAKE PAYMENTS.  HE ROUNDHOUSE KICK MY HOUSE!

Bluz: A Chuck housecall: “When I want your payments, I’ll beat them out of you.”

Goldey: Think of the money we’d save on foreclosing.

Bluz: Waiting for the day we need to collect from Jean-Claude Van Damme or Steven Seagal.  Epic.  Collection.  Day.

The Fleeting Brush of Fame
While Pittsburgh has been a hotspot of filmmaking lately, what with the announcement that the next Batman installment will be filmed there, Baltimore is also making a splash.  After playing host to NBC’s Homicide, and HBO’s The Wire, Charm City is also hosting a new HBO series starring Julia Louis-Dreyfuss as a US Senator turned VP.  HBO has also just started filming a new movie called Game Change, based on the McCain/Palin presidential campaign of 2008.

I know this because they were set up for filming right beside my building this morning.

Well, they weren’t exactly filming… it was more like they were set up for breakfast.

As I walked up to my building from the subway stop, I could see the giant service trucks lining the block.  That’s a dead giveaway that a film crew is in town.  There’s a big courtyard along the way, in front of a Quality Inn, and I could see a breakfast buffet set up there.  Stationed alongside the buffet was an armed policeman.  I wasn’t sure if he was there to fire at pigeons, or keep the homeless away.

Then right as I approached the big hotel beside my building I could swear that the actor Peter MacNicol walked past me.  I wasn’t sure until he was past me, but I was like, “It’s The Little Biscuit!”  (The character he played on Ally McBeal.) 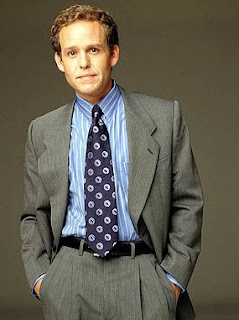 It was kind of weird because you’re never quite sure if it’s a star, or just someone that kind of looks like him.  But given all the movie trucks around, I was sure it was him.  He was just kind of wandering down the sidewalk, probably heading for the buffet.  Or not.  I doubt they feed the cast out on the street, like pigeons.

Later, I did some Google research and confirmed that he was indeed cast in Game Change and filming in Baltimore had begun.  The film will also star Julianne Moore, Ed Harris, Jamie Sheridan and Woody Harrelson, among others.  So at lunch, I took my camera with me to document the scene.  Unfortunately, the buffet was all cleared away.  I was bummed because I was hoping to poach some bacon. 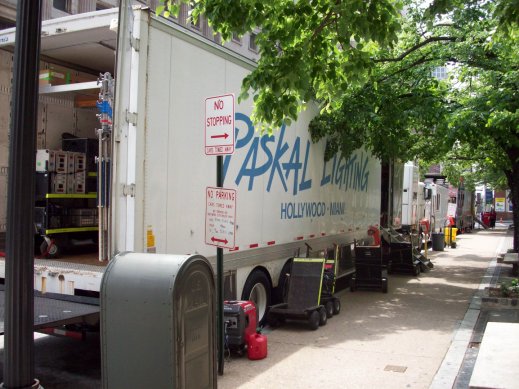 This is one of the many equipment trucks lining the block.  This one apparently contains lighting apparatus. 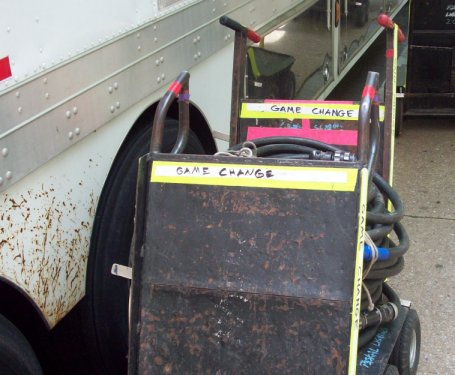 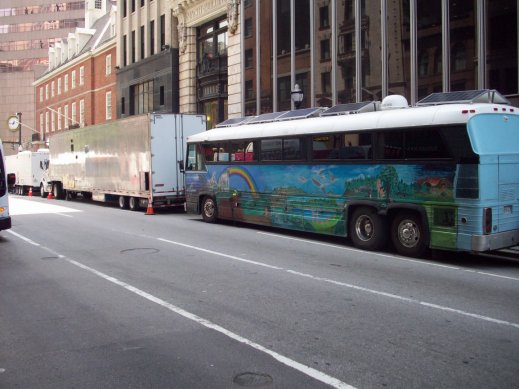 This bus kinda stuck out, right in the middle of a line of big equipment trucks.  With the unicorns and rainbows, I'm thinking that’s gotta be Woody Harrelson’s accommodations. 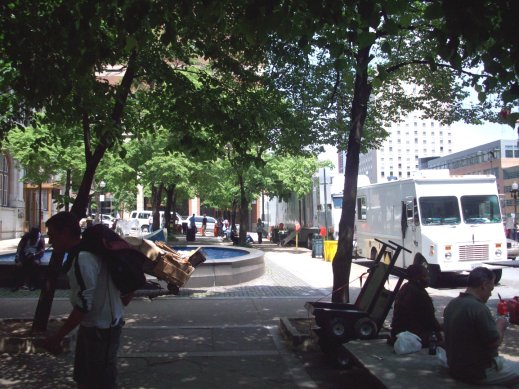 This morning’s buffet was set up on the other side of the fountain.  It’s funny that while in the background, you see all this expensive entertainment equipment and stuff, and in the foreground, one of our local homeless men is sitting on the edge of the fountain, with his own unprofessionally-labeled hand truck carrying all his worldly possessions.

On the way back from lunch, I saw several signs tacked up that said, “SET”, with an arrow pointing the way.  The arrows ended up pointing to the entrance to the big hotel.  I figure they’re probably using one of the ballrooms, or maybe a high-rise suite.

I’ll keep a look out and my camera handy for the next month, in case they continue filming so close by.  Maybe I can get close enough to proposition meet Julianne Moore.

Although I would hate to cheat on Tina Fey like that.
Posted by bluzdude at 7:13 PM

DVD Director's Commentary: The thought of several hundred people all doing roundhouse kicks in unison, whether in an office lobby, or in the street as a flash mob, tickles me to death

When I planned out this post, I had 2 other items I was also going to run, but the first 2 items took longer to detail than I'd anticipated. So after the last 3 relatively long-assed posts, I thought I'd exercise some rare restraint and cut this one short(er).

That is cool that they are filming something near you.

Trash,
Yeah, Baltimore is a frequent stand in for DC... same kinds of architecture.

Couple years ago, they filmed parts of Die Hard 4 a couple blocks from my building... my brother was out at lunch and saw Bruce Willis doing the scene where he was standing on the cab.

He also saw Nicole Kidman running out of an alley, filming The Invasion. "Nice rack," he said. (to me later, not to her.)

These lines are awesome: :)

"if not their companies, then all the downtown food courts"

"Get off Astrology.com, I gotta make a payment."

I knew when I lived in Austin that a few films were being done, but I never got to see any evidence. That's so cool that they're set up so close to you!

Chuck Norris doesn't use condoms. There is no protection from Chuck Norris.

I would be star-stalking for days. Stay close to the action! I'm guessing the casting director will spot you and you will finally be "discovered."

BTW, I'm reading Tina Fey's new book, and except for the slightly disturbing cover, it's as great as you'd expect.

Tina would just give you a nice roundhouse kick.

Cristy,
Sadly, there were no movie trucks out there this morning. They must be done with the big ballroom scene. Or the rain chased them away. They probably wondered where it came from, since they’re used to rain being made by machines.

Gina,
Chuck Norris once roundhouse kicked a horse in the chin. Its descendants are now known as “giraffes.”

Chuck Norris destroyed the Periodic Table of Elements because Chuck Norris only recognizes the element of surprise.

Chuck Norris’s roundhouse kicks can alter your DNA. 50 years from now, your descendants will clutch their heads for no apparent reason and go, “What the hell was that?”

Chuck Norris can win a 7-game series in 3 games.
(I made that one up… my one contribution to Chuck-hood.)

Sherry,
The casting director would only want me if he’s looking for a terrorist, or a double for Mick Fleetwood.

I definitely want to read her book, Bossypants. The excerpt I’ve seen already was hilarious.

Lisa,
I would be honored to take a roundhouse kick from Tina Fey.
“I think she likes me…”

Chuck Norris does not sleep. He waits.

I loooooove Julianne Moore. Did you see A Single Man? She's so totally cracked out and beautiful.

I love that you took pictures of all this, though. You would be assaulted in NYC for doing that, but I always want to.

Cassie,
There is no chin under Chuck Norris's beard; there is only another fist.

PD,
I tried to be real subtle with the picture taking... didn't make a big production of it, I just pointed and shot. (as evidenced by the dude that wouldn't get out of my way in the last shot. I must have stepped to the side 3 times, and each time he adjusted to stay in my way. By accident.

Walking past the catering trucks in the morning when they are filming in Pgh is such torture! They smell SO GOOD.

DG,
I didn’t get close enough to smell the buffet, and the trucks I saw were more like equipment trucks.

It’s always so much fun seeing the movies later, and picking out the local landmarks.

Chuck Norris is my pretend boyfriend.

MBG,
Be careful... when Chuck Norris breaks up with a girl, he roundhouse kicks her in the face. And Chuck Norris never pretends.