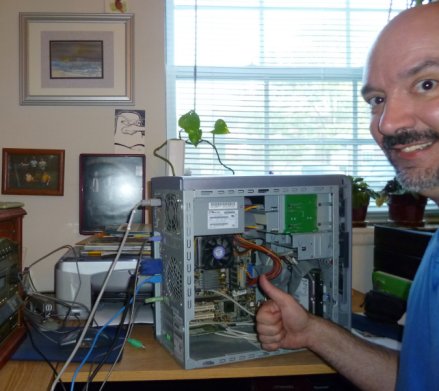 And first thing tomorrow, I’ll figure out how to back up my important files onto my external hard drive.
Well, maybe not “first” thing.  The new Harry Potter just came out.  Plus I have to go shopping… And stop at Wendy’s.  So maybe “fourth or fifth” thing…
Thank you for coming back.  I’ve missed you.
Posted by bluzdude at 8:54 PM

Well, I must say I was beginning to get a little worried. I thought maybe you had had some sort of cardiac episode. Had I known you were only struck by lightening, I would have felt much better.

Glad you're back at the helm. For Pete's sake, back up all those photos IMMEDIATELY. Thunderstorm season isn't over yet.

good luck with the computer!

Yes, I'll do the backup, probably on Sunday. Our forecast calls for clear skies.

Lemons,
Well, I guess I had the good luck because the fix worked. Thanks!

Glad you got your pc back up.

Oh your worst nightmare has always been my greatest fear. So for Christmas Matt got me an external harddrive and I haven't looked back. I mean, those are all my kids' lives there, since nothing was on physical film.

On that note, I missed you. As your original commenter, I missed my Bluz.

Cassie,
Actually, my worst nightmare is that I would be gone for a week and no one would notice.

I still have to get back to your site and fill in some captions on all those pictures. I tried from work, but for some reason, on that PC your comments field yields black print on a dark background, so I can't see what I'm typing. That would produce a bunch of typos, I'm sure, which I know you don't like. I'll get there...

Reeeik,
Yeah, I knew you would comment on this one. Hell, I almost emailed it to you last night, just to prove that I could fix something. (That's why I included the picture... proof that I at least successfully opened the damned thing.

BTW, one of my chores today is to go buy a power screwdriver, because, in fact, I have to put up a new mini-blind in the kitchen. Pinky broke the last one.

I'll be extra sure this time, to check that the screwdriver is set to "forward" and not "retract." Lesson learned, my friend.

Welcome back. I was beginning to wonder if someone should start calling hospitals. Mr. DG keeps bugging me to backup my computer. Maybe I'll try to learn from your experience.

DG,
It's definitely worth your piece of mind to back up your files. It's actually pretty easy. I got a 500 GB external drive and it really wasn't very expensive at all. And I started the backing up sequence this morning... it's percolating right now. And from this point on, every time I turn on the PC, it will automatically search for anything new in the files I designated, and back them up.

And as my friends will tell you, if I can figure out how to do it, anyone can.

Glad you got your PC back, I noticed a lack of posting on my blog feed and was getting worried!

Rev,
Thanks for noticing, bro... it was like dying a slow death... cut off from contact with the outside world.

Bluz, so happy you are up and running again. You have been missed! I wonder if a surge protector would help and save you that cardio-fix inside the computer? If you are at all like me when ours crashed once, you probably felt as though YOU needed a cardio-fix!
Cheers, Bluz!

Cher,
I have a surge protector in use. Guess it got overpowered. Next time I go to Best Buy, I'd better pick up a new one.

Oh, gosh, losing all of my stuff is something I worry about, like, every day. Guess where all of my photos from the past five years are. Give up? On an external drive on my desk at work. Which means that anyone could steal them at any point. So now you have my freaking out even more. Yet I'm clearly going to do nothing about it.

PD,
Always happy to inspire panicked inaction in others...

I expect you to get cracking on the outraged post about the debt ceiling increase and the obstinate GOP at your earliest convenience.

I feel about the same way about computers and cars: when they work, it's great, but when something goes awry I hate them!

I dropped my Mac laptop this past weekend and the screen is going all screwy on me. :/

I swear, before I got my Mac, I went through this same scenario about once a month. Here's hoping it never happens to YOU again.

Red Pen Mama,
So far, I’ve been avoiding that controversy, because it’s getting to be the same old thing, over and over again. The Dems are trying to get things done, (in this case, avoiding another economic collapse) and the Republicans are holding everything hostage until they get what they want, country be damned. And what they want is the big business money-wheel to keep on turning and turning. There is nothing new there whatsoever, they’re just being obvious about it now. That said, I’ll probably have an angle on this in next Thursday’s post.

Jessica,
Just wait until the baby starts spilling/spitting/smearing stuff on it… Heck, you should wrap the thing in Saran Wrap right now.

Hey, someone should totally market some kind of PC protective device for parents of small children… a kind of retroactive PC Condom.

Mrs. Bachelor Girl,
Are Macs somehow impervious to lightning strikes? I wouldn’t put it past Steve Jobs. And you, too, should look into the PC condom… The goo will be a’flying in your house before you know it!

Wow! I'm super impressed. I've never dared open my computer, either, but you've given me hope that should I ever need to I just might be able to fix something without making it worse.

Kernut,
I owe it all to the Internet! And the Google. All I did was look up my question and print out some key comments from the IT message boards. Worked like a charm! Otherwise, I'd probably be out $200 to the Geek Squad and probably have to buy a new computer to boot.