I went to see the new and final Harry Potter movie this weekend and I was very excited about doing it.  It’s been a long wait since the last movie (that made up the first half of the last book.)
I remember when I first heard about the Harry Potter stories and how big a deal they were becoming, but I never had any interest at all.  Never gave the books or movies a second thought.  Just one more children’s franchise, I thought.
Then I was hanging out with my nephew when he was just a little’un, and he was watching the first Harry Potter movie.  In very short time, I was captivated by the story.  The kids were just so adorable and the story was so detailed and imaginative, I couldn’t help but get sucked in. 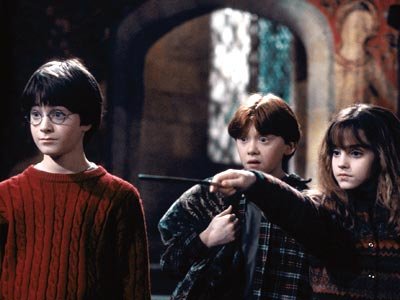 Soon after, I got to see the second movie when I was visiting my buddies in Ohio.  Their kids were watching it and I joined them at the outset.  The third movie had already been in the theaters and gone, so when the DVD came out, I bought it.  That one, Prisoner of Azkaban, has been my favorite, at least up until now.
So when the fourth movie came out, I went to see it in the theaters and have been back to see every one since.  Then last year, from December through February, I read all 7 of the books.  If I loved the movies, I adored the books.  Finally I could see what all the book readers had been complaining about, regarding details and subplots from the books that never made it into the movies.
When it came time for me to read the last one, I had to seriously consider waiting.  Neither of the 2 movies from Deathly Hallows had come out yet, so this would be the first one in which I’d read the book before seeing the movie.
I considered for about 37 seconds, before diving in.
Whaddya kidding me?  Like after I’d just torn through the first 6 books I was going to postpone the ending?  Fat chance.  I was all over it.  There weren’t enough hours in the night, or else I’d have knocked it out in one sitting.
I always feel kind of dopey going to see the Potter movies… I mean, a grown-ass man, almost 50-years old, going to see these movies.  But I get over it pretty quickly, especially when I look around and see all the grownups there without kids.
That’s how it was on Saturday.  Ten minutes before show time, the theater was almost exclusively filled with adults.  It wasn’t until right before the previews started that the families started coming in.  The theater wasn’t crammed, but it was probably about ¾ full.  Even so, I discovered the sure-fire way to make sure you get a ticket and a good seat for a hot movie… I buy the tickets online.
It’s not because it gets me right in, past the whole crowd of ticket-seekers; it’s because every time I buy online, when I get to the theater, there’s no one in line.  I’m two for two so far.  I suppose it works the same way as my bringing an umbrella or raincoat virtually guarantees that it won’t rain where I am.
Anyway, I loved the movie.  Yes, there were book exclusions, but nothing terribly surprising or crippling.  A lot of the omissions were inevitable, given that the back-stories that supported them were omitted from previous movies, so they couldn’t just pop up at the end.
For example, I’d have liked to see more development in the romance between Harry and Ginny Weasley.  But in the earlier movies, the romance was sort of underplayed, so it would have been weird if it was a huge deal here.
Even though you may already know how the Potter series ends up, I don’t want to include any spoilers here.  Suffice to say, there is huge action and quite a number of powerful emotional moments.  People may quibble about the details online (and by God, they certainly are), the entire second half delivers quite a wallop.
Even me, with my cynical, crusty, almost 50-year old ass, had to swallow hard a couple of times.  Neville’s moment, alone, was a catharsis 18 movie-hours in the making.  The vast journey all these kids have taken, when you think about the entire story arc, is astonishing.
There’s a moment where they flash back to scenes from the first movie and it was so jarring seeing how small they once were.  They’ve aged so gradually and gracefully that it was almost imperceptible.  Daniel Radcliffe’s “Harry” goes from a slight but bright-eyed little boy to a young man with depth of feeling but balls of iron.  Rupert Grint’s “Ron” goes from a little red-headed imp to a strapping, slab-shouldered bloke with an especially effective teenager’s glower.  And Emma Watson’s “Hermione,” well, holy crap, she just grew from an “insufferable know-it-all” into a stunning young woman, didn’t she? 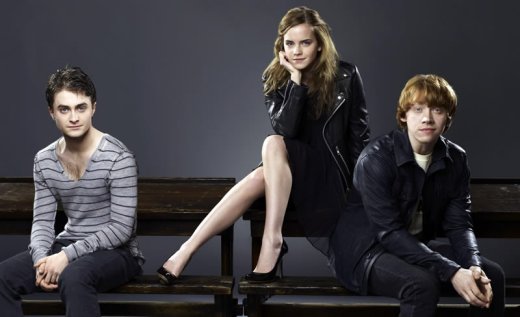 But in my opinion, none changed as much as “Neville Longbottom,” who went from being such a completely inert little clutz, to the rock-ribbed survivor that makes such a dramatic stand before claiming his moment of fame.
I left the theater feeling thrilled, yet sadly wistful.  It was like taking those last few bites of your favorite sandwich and knowing that with each bite, you’re getting to that point when there is absolutely no more.  (This dawned on me as I was at Wendy’s after the show.)
The story wrapped up in an emotionally satisfying manner, but what upset me was knowing that I wouldn’t be seeing these fine young actors playing these amazing characters, ever again.
But I guess that’s really the trick, isn’t it?  Leaving the audience wanting more…
Posted by bluzdude at 9:43 PM