Dancing on the Ceiling

I’ve been staying away from the debt ceiling debate, pretty much.  All spring and summer it’s been the same old tug of war, each side wanting compromise, without actually giving up anything.
Then in the last month or so, the President has been making noises about getting serious about reducing the deficit, by combining massive spending cuts, including adjustments to Social Security and Medicare, with other revenue-generating actions like closing loopholes in the tax code that allows business to funnel their profits off-shore, and increasing taxes on the richest of the rich.  See, that’s a compromise… each side gives up something it believes in.
You can imagine how that went over with the Republicans. 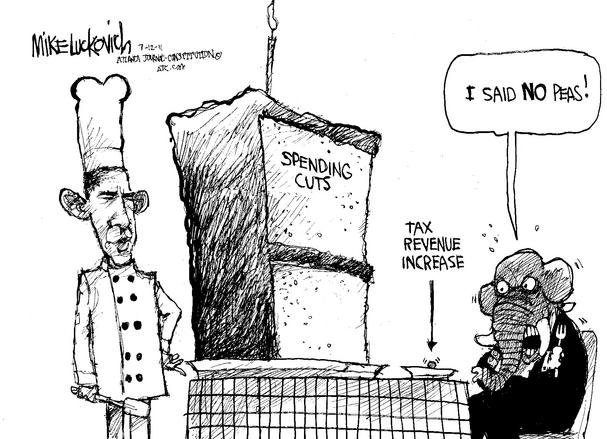 The Republican stance highlights just how indebted they are to big business and the wealthiest 2% of Americans.  To the Congressional Republican, it’s more important to keep their rich benefactors happy than it is to help the other 98% of the country.  Only they can’t exactly SAY that, so they just bellow about not raising taxes and keep quiet about who the actual target is. 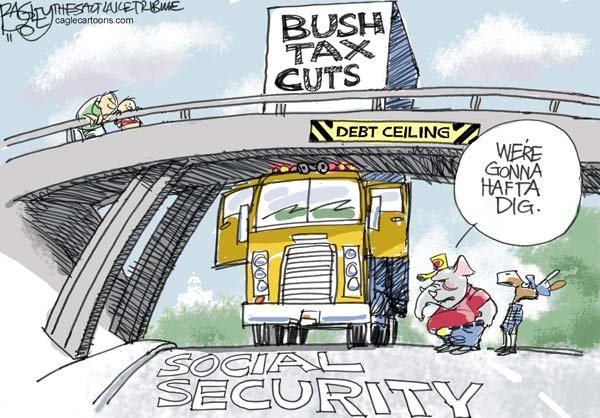 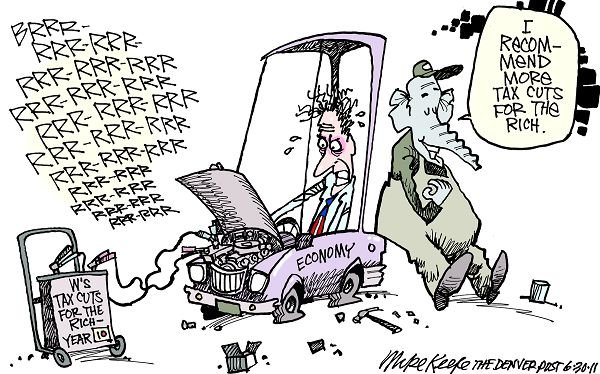 I’m convinced these Republicans actually want the economy in ruins because it helps their chances in 2012.  They’re not even being subtle about it any more.  Look at Senate Majority Leader Mitch McConnell’s bright idea… When the “negotiations” were stalemated last week, (meaning the Dems didn’t roll over and give them everything they wanted for nothing in return), he pitched the idea of ceding complete control of the debt ceiling to the President.  That way, they could spend the next year and a half using it as a campaign issue.
And it would be perfect for their tea-bagging constituency because it’s something you can yell over and over again and it almost sounds reasonable.  Before you know it, Fox “News” would be calling it “The Obama Debt Ceiling,” like it was only invented in 2011 as a nefarious Kenyan device to rob red-blooded Amurcans of their hard-earned dough.  I can just see the specialized graphics package now. 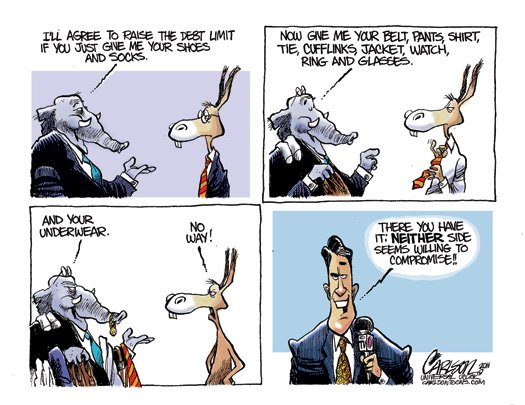 A lot of liberals have been going ballistic over the fact that Social Security was even put on the table.  But I’m not one of them.  I’m no financial genius but even I can see that if something isn’t done to tweak the system, it’s going to run out of cash before I ever see a penny of it.  So whether Cost of Living increases are lessened or eliminated, the retirement age is pushed back, or wealthy seniors receive fewer benefits, something has to be done to mitigate the effect that retiring baby boomers are going to have on Social Security funding.  So I’m all for some short-term hardship if it will push edge of insolvency down the road by a few more decades.
And liberals aside, that idea is not going over very well with the AARP either, who are fighting tooth and nail to keep things as they are right up until, I presume, they run out of money.  Politicians will let that happen, too, because heaven forbid that they tick off the AARP.  Retirees may forget a lot of things but they do not forget to vote.  And no matter how well off they are, they will vote to make sure that no one messes with their Social Security checks.  You can take that to the bank.
Now contrast that dynamic with a story I read a couple weeks ago, about retirees living in Japan.  You know how they’ve had that little problem with a nuclear reactor over there that’s gone all kerflooey?  Well, it’s still kerflooey and riddled with radiation inside and out.  You think they have many volunteers to go in there and clean it up?
Actually, they do.  While our AARP members are mobilizing to keep their checks coming, Japan’s retired engineers and technicians are volunteering to put on the radiation suits and go into the damaged power plant to work on the cleanup and repairs.
“Why risk the health of the younger generation, they ask, to perform such work in a perilous radioactive environment?”
It’s not like they have a death wish; they’re just being pragmatic.  At their age, their cell functions have slowed down and the radiation would take longer to have an effect on them.  In all likelihood, they’d be dead from other causes before the radiation could kill them.
So far, the Japanese government has not taken them up on their offer.
One 72-year old engineer said, “This nuclear reactor was the brainchild of our generation, and we feel it’s our job to clean up the mess.”
Do you seriously think something like that could happen here?  I doubt it.  Their culture is to take responsibility and come together to fix a problem.  Our culture is to assign blame and fight over who has to fix it (and then over-pay some black-hat defense contractor to take the problem off our hands).
Then again, the Japanese seniors usually live with their kids.
Maybe we should just keep the checks coming.
On an unrelated note, I saw this Doonesbury cartoon a couple Sundays ago.  I was going to run it the week after, but that was when my PC went down.  I’m posting it now, in honor of my bloggy friends from Great State of Louisiana, Jessica and Mrs. Bachelor Girl, both of whom are definitely descended from unicorns. 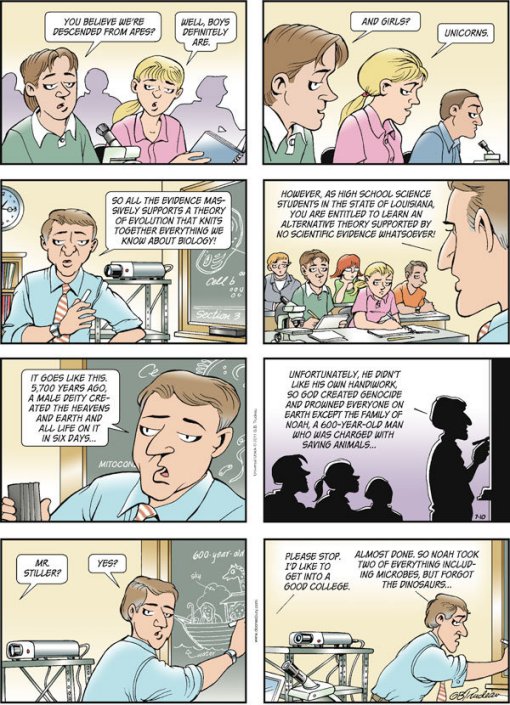 Extremely well said! As always, I'm sharing this! And then I'm searching my home for the hidden microphones you've placed in it because you've typed the words right out of my mouth!

Loved the pic with the donkey and elephant BTW, I might just have to steal it. Rock on Bluzdude, hope all is well for ya!:)

I don't think either side is serious about this and I think both are playing the same old politics game.

Good post. Your comaprison with Japan is apt, inspiring, important and touching. While our leaders whine, bicker and blame others for starting the fire, these people fill a bucket and get in line, silently.
Has anyone noticed yet? Our arch enemy is not the debt, terrorists, radical Islam, conservatives, liberals, the rich, the drug lords, but angry, powerful, big Mother Nature. Our dollars, bullets, ideals, ideals, laws won't matter when/while she throws the big heat around the planet.

I go back and forth on this and related issues. I recently read a quote from a teacher who explained that they would not agree to a wage freeze for a couple of years because it would affect their pensions down the road. But I think pensions are a big part of the problem. Cities, states, and the country are running out of money; many already have. Something (many things) has to give.

I have no idea what the "right" answer is. And I have acknowledged that it is not as simple as cutting back on spending. But as a society in general we are selfish and extremely materialistic. We want more, more, more. And I fear before too long it is all going to blow up in our faces.

That aside about seniors from Japan is just awesome. How come that gets no play over here?

I loved Cobert's take on GOP negotiating strategy, which he called: "You scratch my back, and I get my back scratched!"

And by the way, I am evolved from minotaurs.

Virgil,
Dude, you’re awfully young to be that wise… lol…

Steal and share away! All is well, as long as I stay indoors… 103 is just a little warm for a human habitat. Sheesh…

Trash,
There’s no question that we have to do both. That’s why it’s a compromise. I’d like to think that our Congressmen will take this opportunity to get rid of a lot of those cash-wasting pork projects, but I doubt it. One person’s vital project is another person’s waste, if they’re not going to see the benefit personally.

The Democrats have already taken steps to move on entitlements. If the Republicans are serious about addressing the deficit, they’re going to have to address taxes on the wealthy, and all the assorted loopholes that keep corporations from paying taxes like the rest of us. The fact that they won’t underscores exactly who they’re really representing. (It ain’t us.

Mary Ann,
And Big Mama is sure throwing that heat around this week, isn’t she?

But yeah, when I read about what the Japanese seniors want to do, I immediately wondered if anything like that could happen here, and just as immediately concluded that there was no fuckin’ way.

They should just stamp it on our money… “What’s in it for me?”

Facie,
Your second paragraph says it all. We are indeed a spoiled, selfish culture, bred to expect to get whatever we want and pay nothing for it. And Lord, how we can’t bear it when someone else gets a break that we don’t get ourselves…

Carpetbagger,
You scratch my back, and I get my back scratched!"

The Japanese seniors story gets no play here because it makes us look petty and selfish in comparison.

You know, ‘minotaurs’ sounds like they should be tiny little reptiles.

Bluz, PLEASE go get a job as a political columnist. PLEASE. A magazine editor friend and I had lunch today, and we were bemoaning the dearth of good ones. Do it for your country!

What, I can't stay America's Best Kept Secret? But hey, if your magazine editor friend is hiring political columnists, give her my email...

Mrs. Bachelor Girl is absolutely right. You should be in print, dear Bluz.
Try: THE SUN, letters@thesunmagazine.org
"We love getting mail."
They're in Chapel Hill, NC, have a circulation of about 177,000. Check it out.
Or consider submitting an article. Your work fits here nicely.

The Republicans just think if they keep disagreeing with the Prez, it will help them in the next election. Little do they know that if there is no compromise from their side, they will lose big again. They are so out of touch with the regular person it is unbelievable.

The only voices that register are those of their big business sponsors and their lobbyists, because they know that with the fuck-ton of cash coming their way in the next election, they can buy the minds of everyone else.