Pinky and I went out on a walk yesterday, to celebrating being off work on the 4th of July.  It might as well have been Thanksgiving, because I was in a very thankful mood regarding the existence of “shade.”  Best thing about the woods is that it’s all in the shade.

We walked along a trail that believe it or not, falls within Baltimore City.  It follows a creek of some kind.  You just have to hope that no one graffiti-tags your car while you’re out on the trail. 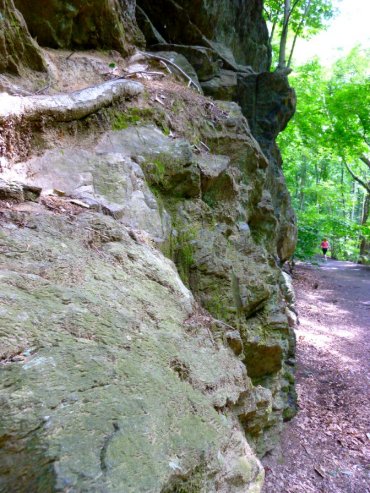 No demons hiding in this rock… I checked first.
I like a nice, organized trail, with a clear path and no weeds that you have to shimmy by or vines that I have to duck under. 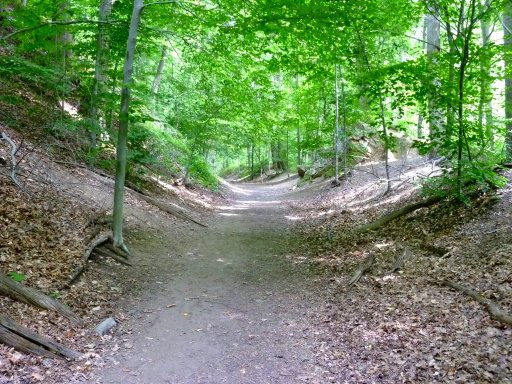 It wasn't always this wide, but it is most of the time.
At one point, Pinky ducked off the trail.  Can’t be sure what she was doing over there but I have my suspicions. 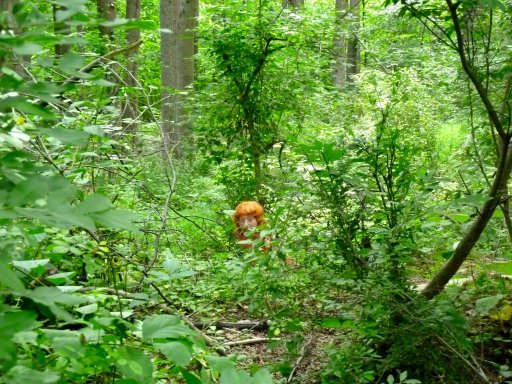 I’m guessing she’s shooting dice with raccoons.
There was one point where a bridge went over a shallow portion of the waterway, which is a great place for dogs to play.  There were about 5 running around with their owners and each other.  I felt bad for one poor pooch, whose tennis ball somehow sunk.  He wanted it desperately, but not so badly that he’d put his nose in the water to get it.  He kept pawing it around the bottom and looking pitifully back at his owner. 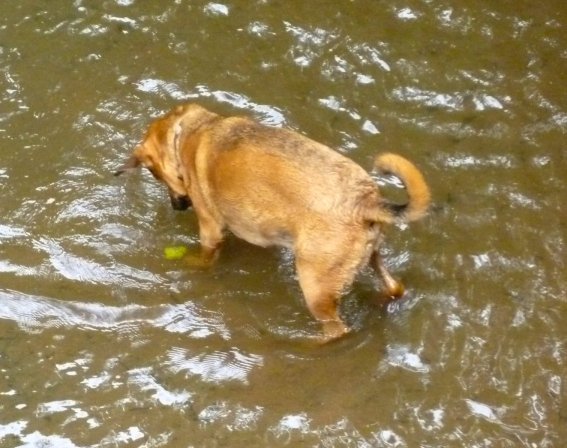 "Must... have... ball…"
After about 10 minutes, he finally stuck his nose in and got his ball.  I love a happy ending.
The water there made me wonder if there were any fish, and the fish made me wonder if there were any bears.  The thought of bears made me remember an old commercial I saw once online.  Maybe you’ve seen it before.
In the very earliest days that I had a computer, (circa 1998 or so), this commercial made the rounds.
It still cracks me up.  “Look, an eagle!”  Cheeky bastard.
Then, tonight when I went to look for the commercial on YouTube, I saw that there were John West commercials…
I’m a total sucker for physical comedy done well.  Or maybe it’s the waders; it just looks funny.
Lastly, I was reminded of this joke.  Again, maybe you’ve heard it before… I probably got it emailed to me years and years ago, but it stuck around in my memory banks.  (And probably in my vast joke file, which is now so freakin’ vast it’s damned near impossible to find anything I’m looking for in it.
An atheist is walking through the woods on a bright summer day.  As he comes across an open meadow, he spots a huge bear looking right back at him.  The bear comes dashing straight at him, roaring in outrage.
As the bear reared back one of his giant paws to strike, the atheist says, “Oh my God, HELP!”
In an instant, everything froze.  No branches waved, no grass moved.  The bear was frozen in time, as was everything in the forest, except the atheist.
Then he heard a voice, “And what would YOU like this God, in whom you do not believe, to do?”
The atheist swallowed hard and said, “God, I know I’ve spent my lifetime saying you don’t exist and denouncing your ways.  It would be hypocritical for me to ask you to come to my aid and spare me from harm.  But your creature, brother bear… would it be too much to ask if you were to make HIM a Christian?”
A great thunderclap sounded and the world swam back into motion.  The bear abruptly sat down at the atheist’s feet and bowed his head.
The atheist then heard the bear say, “Bless us oh Lord, and these thy gifts…”
Maybe I should keep my nature walks confined to the mall…
Posted by bluzdude at 8:15 PM

I wish there was "nature" around here in Houston.

Beautiful! I wish it were cool enough to take an afternoon stroll around here.

Trash,
Just wait ‘til the next hurricane hits… you’ll be up to your ass in “nature.”

I really wish you had some problem where every photo you took had a demon hidden in it. It would ALMOST make a good horror movie. Almost. Especially if Rob Zombie is involved.

Just because I don't see them right away, doesn't mean they're not there. But I agree that it would make a good movie.

I loved the joke! And my dog would most definitely NOT put her nose in the water to get the ball. She's too much of a princess. And she's a Boxer!

Chicago is severely lacking in natural beauty. Plenty of wildlife though. If you count gun-toting gangsters...

What a beautiful trail! Unfortunately, it would be so hot in Louisiana that you'd die. I can only dream of pleasant afternoon strolls on the Fourth of July.

Mad,
Finally! Someone acknowledges the joke! (OK, maybe everyone already knew it.)

Beer,
Baltimore is not lacking for gun/knife/rock/2 by 4-toting thugs either. That’s why when we want to take a walk; we sprint right from out car, directly into the woods. I’ll take my chances with the bears.

Mrs. Bachelor Girl,
It sounds like if I lived in Louisiana, I’d be forced to spend my days lying naked on the floor directly under the air conditioner. Hope you get some temperature relief before Cassie visits. She hasn’t developed any natural defenses to that kind of hear and I’d hate for her to burst into flames before she even gets from the airport terminal to the car.