My Jilly’s mojo attire is now 2 for 2, so I dare not change it, as my Steelers held on for a 17-10 win over the Jaguars.
Sitcom Kelly came out to see the game with me and she brought a special guest of honor.
Now, you all know I tease Sitcom Kelly about all kinds of things, least of all for keeping various professional athletes captive in her basement “Silence of the Lambs” pit.  But she’s also been pursuing a fulfilling and beneficial sidelight.  For the last 6 months or so, she’s been in the process of becoming a provider of foster care.
A couple of weeks ago, she was called upon to provide a place for a homeless 20-year old woman to stay.  While that wasn’t exactly what Sitcom Kelly had in mind, it occurred to me that I should have thought of that angle many years ago.  It would have made dating so much easier.  Anyway, the 20-year old was only a short-term thing and she was off to a long-term home within a week.
But last week, Sitcom Kelly was called upon to take in a 3-year old girl.  She will have her until at least next month, when the next court hearing is scheduled.  Wanting to get the child out of the house, AND not wanting to miss the Steelers game, Kelly brought the child along to watch the game with me at Jilly’s.
Now before you wear out your tongues clucking at me, keep in mind that I only refer to Jilly’s as a “sports bar” for brevity’s sake.  It’s actually a nice restaurant that has a bar, just like any Outback or Macaroni Grill.  It just also happens to have a slew of HDTVs, tuned in to football games on Sunday.  There’s no reason not to take a child out to a restaurant, so I don’t want to hear any fuss about it.  And naturally, Sitcom Kelly wasn’t drinking anything stronger than Diet Coke.
The only risk would be that the child would not be happy there and make a ruckus.  I know that was my concern, because it carried the possibility of eating into my concentration as I watched the game.  Plus, I’ve never plotted out the mojo involved in watching a game with a little one.
As it turned out, I needn’t have been worried on any account.  The girl was just delightful and she had me wrapped around her tiny little finger within minutes.
When the agency first contacted Sitcom Kelly about the girl, they said she was Caucasian.  This is a picture of the little peanut: 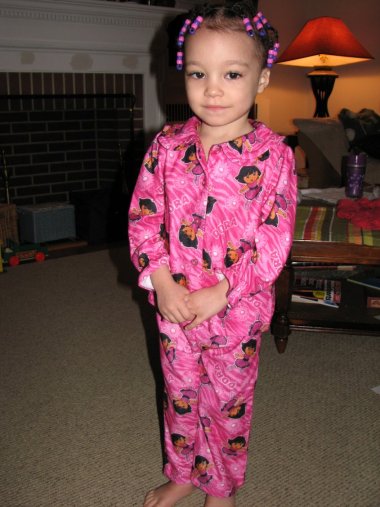 The girl was just about the cutest thing I ever did see.  But she’s clearly biracial.  Right off the bat, Sitcom Kelly took the beads out and washed her hair.  After that, she wasn’t quite sure what to do with it.  She told me she had no idea what to do with this hair.  Hell, she barely knew how to take care of her own.  (Her words, not mine.)  On the way to Jilly’s, they’d stopped at Target for some hair bands, which the girl wore with style and class.  (Curse me for not bringing my camera.)  She also appeared to me to be younger than 3.  I could be wrong, but I don’t exactly trust the word of any agency that thought that this kid was white.
Sensing an opportunity to help, I sought the help of my ex-work wife, Pamela (aka “Sunshine”), who has many years experience in being a biracial beauty.  I knew she’d have some hair care tips to share.  She was only too happy to help.  I believe her exact words were “I can’t have one of my kind looking like a hot mess.”
Anyway, the girl seemed perfectly content to sit at the table and draw in a spiral notebook, or play with her big sparkly purse.  She spoke hardly at all, yet she seemed to understand everything that we said to her.  I told Sitcom Kelly not to worry about it… my nephew Sammy was the same way.  While his brother Daniel spoke early and often, (one day when he was 9-months old he took a deep breath and began speaking… he didn’t stop until… well, I’ll let you know when it happens,) Sammy could follow along with any conversation and do whatever he was told.  But he just didn’t care to speak.  He eventually snapped out of it and is fine.  So I didn’t think there was any cause for alarm with the girl.
Kelly and I were concerned that she might have a problem with men, but while she was a bit wary of me at first, she didn’t seem particularly frightened.  She’d just stare at me with her big almond eyes and give me a sly smile.  Later, she went on to make friends with the big dude sitting behind her, and his 6-year old son.  So I think she’s OK on that front too.  The boy was very good with her, letting her borrow all of his crayons individually, for 5 seconds at a time.  (She was more about the ‘borrowing’ than the ‘drawing.’)
But the kid was a real trouper.  She hung in for almost the entire game.  She played, ate a few fries and some applesauce, and was generally charming.  It was like, in that moment, I’d do anything to make her laugh or smile.  I’ll be the first to admit that I’m a complete sucker, but I begun to understand why parents often act so goofy around their kids and seemingly cater to their every whim.  I get that they just want to see their kid happy.
I also realize that I’m only using a 3-hour sample and a lot of that “cute” rubs off during day-in, day-out child rearing.  I’m only used to uncle-sized doses (which is what makes me such a sucker for the cute).
I don’t know what kind of stuff this girl has gone through but I know that for the next month, my friend will make this kid’s life much easier than she’s used to.  While I tried to convince Sitcom Kelly that this would make for great material for her to use to start a blog, I’m pretty sure that the odds of her doing one are now infinitesimal.  But on the bright side, she will have some help tending to her guys in their Pits.  The girl might even get to tend one of her own.
Hey, I wonder what happened to that 6-year old boy…
Posted by bluzdude at 6:58 PM