Remember, in my last post, how I was complaining about having to bust ass over to the local park because Tuesday was the only day it was going to be sunny, and I wanted to take some fall photos?
All for nothing.  When I woke up today to dazzling sunshine, my first thought was, “Fuckin’ weathermen…” So after I got my newspaper and blog fix, I headed back to the park to get my fall pictures with sunshine, glorious sunshine. 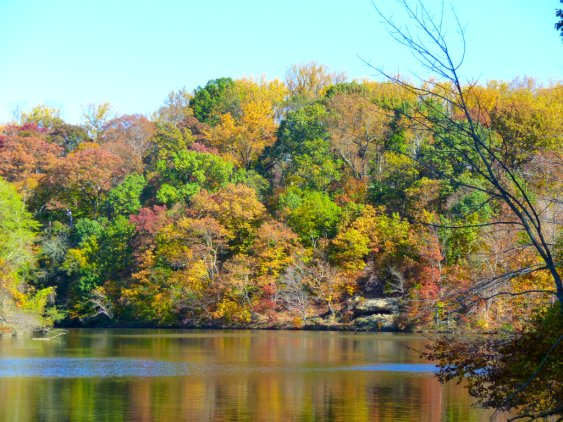 See, doesn’t this look better when the whole side is lit?  Also, do you see that cave right by the shore?  Remember that because I got a better shot of it later.
Pinky and I have been going to this park since shortly after we met, in 2006.  But a couple years ago, they closed it down because the access bridge was deemed unsafe.  They only reopened the place a couple weeks ago.  It always used to be a haven for dog owners and in this incarnation, they’ve fenced in a place for dogs to play off-leash.  I like this idea because it allows dogs to run around without bothering or scaring the non-dog people who might just want a peaceful walkabout.
Last week when I went, I didn’t have time to cross the new bridge and go into the park, so I had my chance today.  The bridge crosses right in front of a dam and I took advantage of the many angles provided as I walked around the dam. 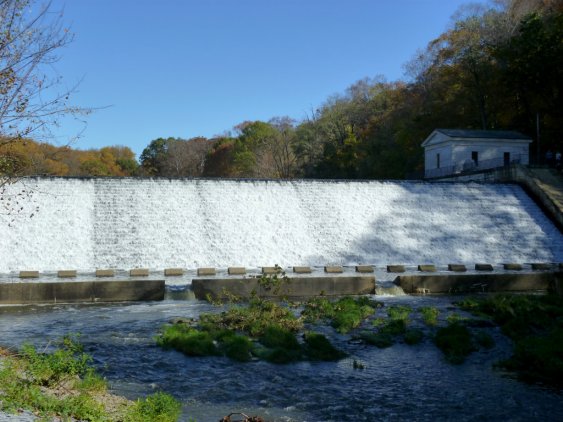 Caption: I took this from under the bridge at the bottom of the dam. 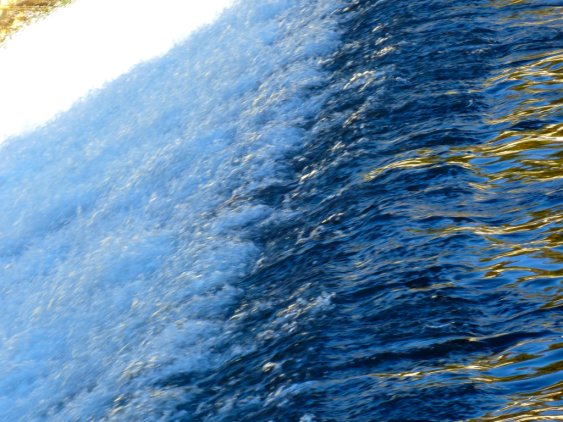 From near the top of the dam.  Rushing water fascinates me. 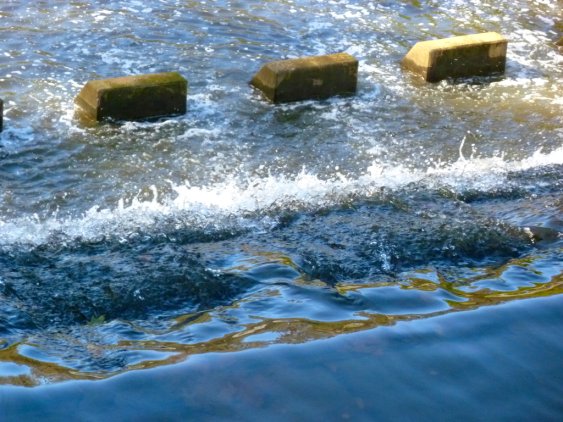 From just behind the precipice of the dam.
The foliage still isn’t in full swing… there were a lot of yellows but still lots of green.  Where is the red? 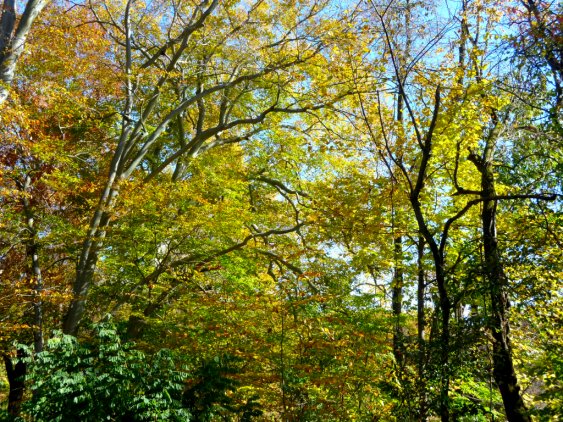 From along the path.
The main portion of the park is like a peninsula that juts into Roland Lake.  There was a path that we used to walk, that went around the perimeter.  As I was walking it, I saw that the dog park was placed on the end of the peninsula, which blocked off some of my favorite places to shoot.
Not being one to take that kind of disappointment lying down, I went “off-path.”  I scrambled down to the bank of the lake and went around the fences.  Hey, it’s a park, not an African safari.  Where’s the fun in staying on the path?  So I got down to my favorite picture spot, where I could shoot the lake, the trees and a railroad crossing.  For a change, I actually had a chance to shoot a train running over the bridge. 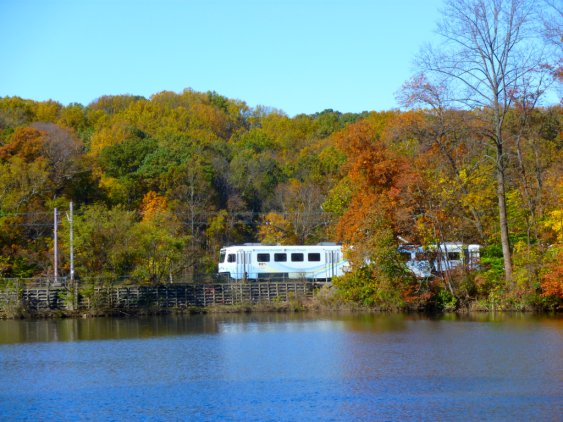 OK, it’s not technically a “train.”  It’s the light rail.  So sue me.
I’ve got a number of pictures from that vantage point, from winter, summer and spring.  This is the first time I’ve gotten decent fall shots here.
While I was “off-path” I made my way around the water’s edge. I love using fallen trees in the foreground.  This one looked like a sea serpent.
Also while I was on the perimeter, I was able to grab a better shot of what I call “The Bat Cave.”   Last time I was out here, my camera didn’t have a sufficient zoom to get an angle like this. 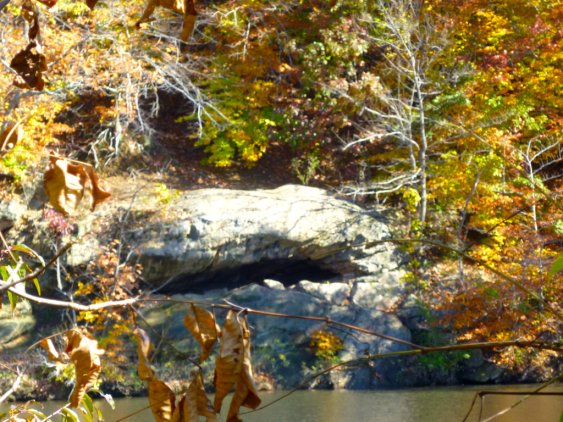 The Bat Cave.
I know I call it The Bat Cave, but it really remind me of that asteroid monster from the first Star Wars movie. 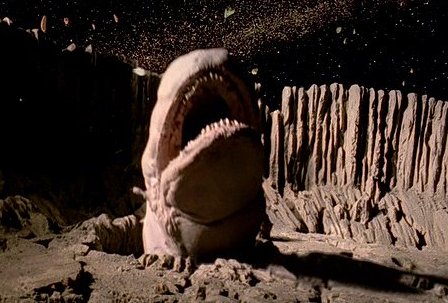 Put some teeth in that thing in my picture and change the angle, and you have the famous Space Slug.
Along the way, I met up with a guy that was walking his golden retriever, Luna.  I’m completely captivated by goldens, so we talked for a bit as we walked the path.  I really wish I had taken a picture.  She’d just been in the water, as retrievers are prone to do.  That was probably a good thing for the owner, because it kept me from picking her up and running away with her.
I took about 125 shots in the space of an hour.  Of those, I deleted about 20 because I intentionally over-shot, not wanting to lose a good shot because of a random jiggle or loss of focus.  So while my main mission was to get fall foliage, this one ended up as my favorite. 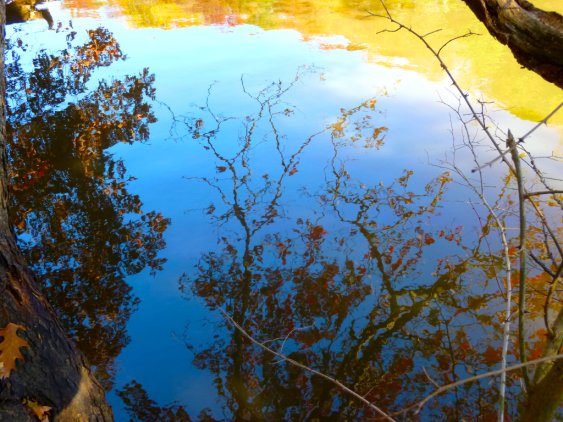 Maybe it just captures my reflective mood.
The Mojo Boogie
Big game today against the Patriots, who have had the Steelers’ number in recent years.  I believe Tom Brady is 6-1 against the Steelers.  That’s called ‘ownership.’
I won last week wearing my Hines Ward jersey, with the Steelers at home and me watching the game at home.  Those circumstances remain, but I opted against wearing the Hines jersey again.  First off, Hines isn’t playing, due to an ankle injury.  Also, this is the jersey I wore when I went to the AFC Championship game in Pittsburgh against the Pats in 2005.  The Patriots mopped up the field with my boys that night, so I’m hesitant to wear it today.  I’m going with the defense, who has to step up tonight. 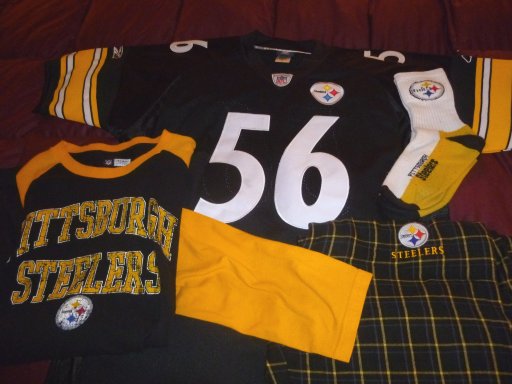 Late Update:
The Steelers won 25-17 in a thrilling, hard-fought game.  The mojo worked, however Lamarr Woodley, whose jersey I wore, got hurt during the game.  That means that the Steelers may face the hated Ratbirds next week, missing 3 of their 4 starting linebackers.  As big a win as this was, I only hope that it's not a pyrrhic victory.  But it's still pretty sweet to get this hoodie-wearing monkey off our back.
Posted by bluzdude at 3:33 PM

Email ThisBlogThis!Share to TwitterShare to FacebookShare to Pinterest
Labels: Picture This, Pittsburgh Steelers, The Mojo Boogie