I probably should write about something different today but I don’t quite feel like delving into anything topical or deep.  So why not tie a bow on my vacation?  I know you’re all dying to hear more.  I mean, I wrote about the first part on Saturday and then I wrote about the second part on Monday morning, so that left a day or so that wasn’t covered.  You know that my life is an open book, but who knew it was as thick as “War and Peace?”

OK, I freely admit that I suffer from “Blogger’s Disease,” wherein a person expects that everyone else is as fascinated by the minutiae of his life, as he is.  Why else would I dare to trot all this stuff out week after week?

Anyway, I started feeling sick on Sunday night.  I was starting to get a scratchy throat, which led to an uncomfortable night and come Monday morning, it was still sore and now I was tired too.  A sore throat with me is usually the first step to a full-blown cold, so I wasn’t looking forward to that experience, although it would have been a good opportunity to get some of that vaunted Mother’s Care for her Poor Sick Baby.

We were going to go out to Pensacola Beach around 9:30, but I had to put the kibosh on that plan.  Just wasn’t up to getting down there, traipsing around the beach and setting up the chairs and umbrella, just to walk around in the surf for an hour.  (Remember, Pinky’s a redhead, so we have to limit her exposure to the sun, lest she burn up in a wisp of smoke, like a vampire.)  But after all, we already got to take in the beach beauty from the Jimmy Buffett Hotel on Sunday night. 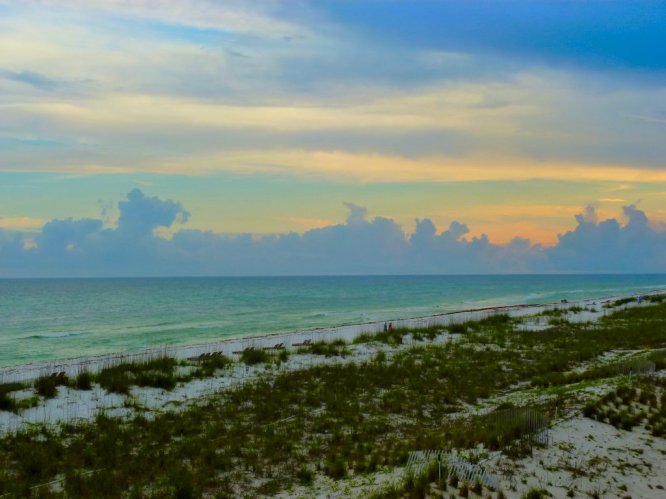 But I wasn’t feeling so poorly that I wanted to pass on the trip to the Chinese Buffet that we had planned for after the beach.  Oh man, they really did it up.  They had at least 5 food islands with stuff on each side (75% of which was chicken).  Man, I really got my feedbag on and certainly got my eight dollars worth.  With me in the back seat, I think my folks’ back bumper was dragging on the street.  We may have started a brushfire with the sparks.

I was able to pick up some Listerine on the way back, so I could lay some of it on the back of my throat and gargle.  Sometimes I can cut off a cold if I drown the throat germs in Listerine.

We also stopped at a Bell’s department store beside the drug store.  I had noticed my dad’s nice new Nikes and asked where he got them.  After my last (unsuccessful) experience seeking sneakers that didn’t look like clown shoes or moon boots, I figured it couldn’t hurt to shop out of town.  Found a nice pair of New Balance, size-12, Extra-Wide.  The dogs need it to be roomy.

The thing I hate about Bell’s is that for years, I thought it was BEALL’s, but eventually learned from my parents that the “A” was actually supposed to be a bell and was not part of the name.  But THEN, upon looking up a picture to show you what I was talking about, I see that the bell IS supposed to be an “A” and it IS “Bealls.”  See?

My parents have some ‘splaining to do.  Perhaps the “A” is silent.

For the most part, I figured I wouldn’t have to eat again the rest of the day.  But part of that Sick Child Mothering I was getting included homemade chicken soup.  I can’t exactly pass that up, now can I?  And to go with the soup, there has to be sandwiches, right?  Soup and sandwich go together like peanut butter and jelly… like steak and potatoes… like bacon and me.  Some things go together so well you just can’t refuse.

I was still full when we got up on Tuesday and packed up for the return trip home.  I told Mom not to make us any breakfast because we had a two and a half hour layover in Atlanta, so we would eat there.  This time, we didn’t have to “settle” for Wendy’s.

Anyway, we made all our flights and landed uneventfully, which is what I always hope for.  Nice, dull flights… no excitement needed of any kind.  I took Wednesday off too, as a “recovery” day, to rest up from all the swimming and eating and traveling and drinking.  It’s nice to come off vacation, straight into a 2-day work week.  I’ll have to remember this travel plan.

Now, just a couple short notes that I forgot to cram into the prior posts…

Dog Days
One thing I forgot to mention in the part of my first vacation post, where we were rambling around the empty ballpark, was the existence of the “Largest Hot Dog You Have Ever Seen.”
No, it wasn’t this one… I’ve seen much bigger. 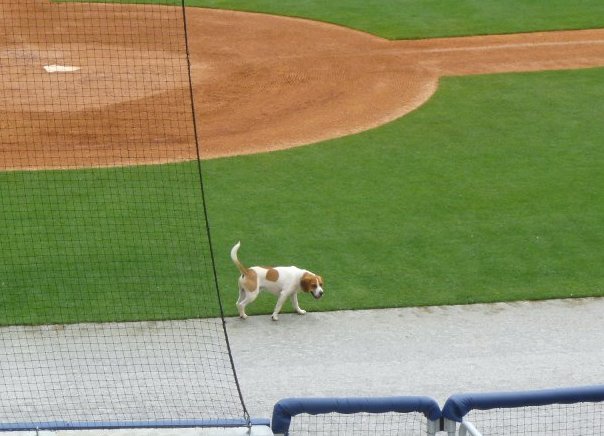 Unfortunately, all I could do was take a shot of the sign.  But one day, dare I say in the not so distant future, I may behold the “Largest Hot Dog I Have Ever Seen,” humbly called “The Big Wahoo.” 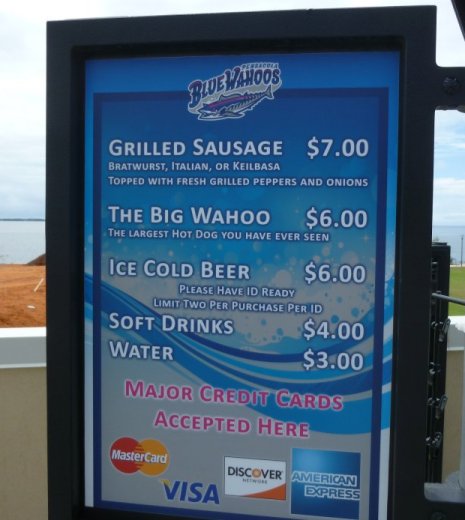 What else can they possibly have called it?

Calling in the Geek Squad
One inevitable part of a visit with my parents is providing Tech Support.  The only time either one their PCs get any kind of scan, sweep or maintenance run is when my brother, my brother-in-law, or I come to visit.  But that’s OK with me because it’s one of the rare times they need me to do anything, and it’s something about whichI know a bit.

This time out, Dad wanted me to make his PC run faster.  So I did a Spybot scan, installed and ran CC Cleaner, deleted a bunch of useless programs and icons and voila!  Back up to decent speed.  Maybe not 85 in the passing lane, but at least 60 in the middle.

On my mom’s PC, (and yes, they each have one of their own, at which they sit back to back like dueling pianists,) she needed her sounds updated.  Ages ago, I set up her and Dad with some movie sound bytes from Monty Python, Blazing Saddles and Young Frankenstein, that would play after designated actions.  But when she got her new PC, the tech guy transferred her sound files but didn’t attach them to any functions.  It was a quick enough fix for me.  I love the easy problems.

When I stay, I can always tell when Dad logs onto his PC in the morning, because I hear, “Hello, vould you like to have a roll in ze hay?” 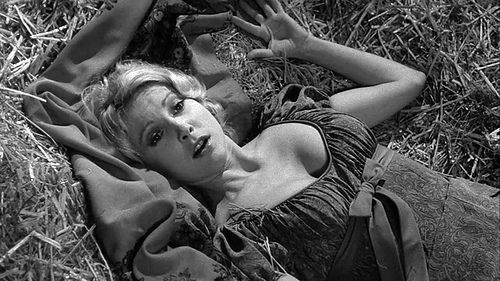 Knee Jerk Reactions
Two days before I left for vacation, I somehow did something to hurt my left knee.  I guess the medical gods figured, “Well, he finally got his shoulder to stop hurting; what can we mess with now?”

I didn’t even do anything in particular; it just started hurting in or around my kneecap when I go up or down stairs.  I can walk just fine.  It’s only the stair-stepping motion.

I was hoping that my parent’s single-story house would give me plenty of time for it to recuperate, but there were those three single stairs going up and down from kitchen to porch (where we spent a ton of time).  But I kept forgetting to ease up the steps and then POW!  I’d take a bad step and almost pitch forward into the French doors.

With cases like this, I’m hesitant to go to the doctor’s.  It’s been my experience that these things heal with time.  I’ll give it a month or two and try not to aggravate it.  Then if the pain persists, I’ll go get it checked out.

Now, back at home, I have 6 stairs going from ground level down to my apartment and then a ton of them getting in and out of the subway station.  Today I had to force myself to ride up the escalator instead of walk up like I usually do.  I do NOT have the temperament for that.  Maybe I’ll suggest they put in a mural on the side, so that I’ll have something to look at besides someone else’s ass.

Getting old sucks.  But at least I get to retire soon, right?

Meanwhile, this week is a 2-day workweek.  Too bad all of them aren't…
Posted by bluzdude at 7:31 PM