This weekend I got a couple of Facebook messages from an old high school friend who is overseas, and they proved to be rather alarming.  It seems my site is banned in Bahrain. 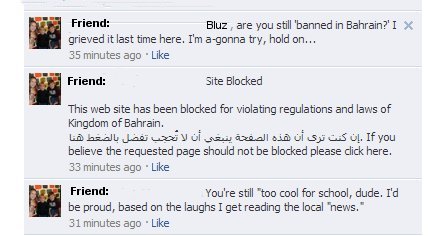 If you’re not up on your geography, Bahrain is a small island just to the east of Saudi Arabia and north of Qatar (home of the hit Arab video game, Qatar Hero). 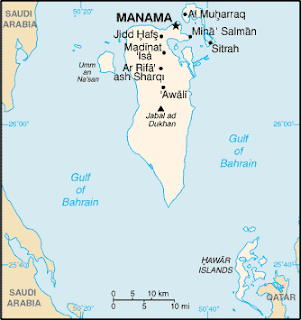 I had no idea.  I wonder if there was some sort of decree involved, or maybe a Fatwah.

According to my country counter, I have had one hit from Bahrain before.  Maybe that was all it took.  Now it’s like a Movie of the Week… “Bacon in the Sand: Banned in Bahrain.”

While I may blaspheme broadly, I don’t hold Islam in any lower regard than I do any other organized religion.  It’s all the same, from my point of view.  So what’s left?  My glorification of bacon?  They don’t like game jersey mojo?  Oh wow… maybe they’re all Ravens fans!  I don’t know if I could stand their version of “Purple Bahrain.”

(Obviously, I spent all day Sunday coming up with plays on their name.  What can I say… I just “Blame it on Bahrain.”  After all, my game was called on account of Bahrain.)

Regardless, I wear my banishment as a badge of honor.  But do you think it has ever happened before?  “I wanna know, Have you Ever Seen Bahrain, comin’ down on a funny page?”  Someone should do something about this.  “But I wonder, yes I wonder, Who’ll Stop Bahrain?”  Without D-fish2, there will be no more “Laughter in Bahrain.”

I’m sure you’re hoping that I don’t go on too long on this theme, but the next thing you know, “Here Comes Bahrain Again…”

Good thing this didn’t happen over Thanksgiving; otherwise I’d out standing in “that cold November Bahrain.”

Lastly, I heard that Bahrain was supposed to play a soccer match in Barcelona, but were so upset at the scantily clad senoritas, then never left their jet.  Which means, Bahrain in Spain stayed mainly on the plane.

Sorry, you can call that a Bahrain fart.  Or a Bahrain seizure, which inevitably leads to Bahrain damage.

“Bahrain, Bahrain, go away,” come again when you can unclench those robes.
Posted by bluzdude at 7:10 PM