Another Day (or two) in Paradise

Saturday was Cinco de Mayo, as well as Derby Day.  After I dropped the previous post, we headed out to lunch at a local Mexican place, Rio Bravo, after which we headed for Walgreens and Lowe’s.  My folks needed to go to Lowe’s to pick up some flowers, and we went to Walgreens because that’s what my parents do whenever they’re out on the weekend.  Shopping at Walgreens is like crack, to them.  But I was able to pick up a Pensacola Blue Wahoos t-shirt.  I was looking for a hat, but apparently the team doesn’t have all their merch on the streets just yet.  I’ll probably pick on up online, when I get home.

As for the flowers, Dad got a tray of vincas… as he put it, because it was Vinca de Mayo. 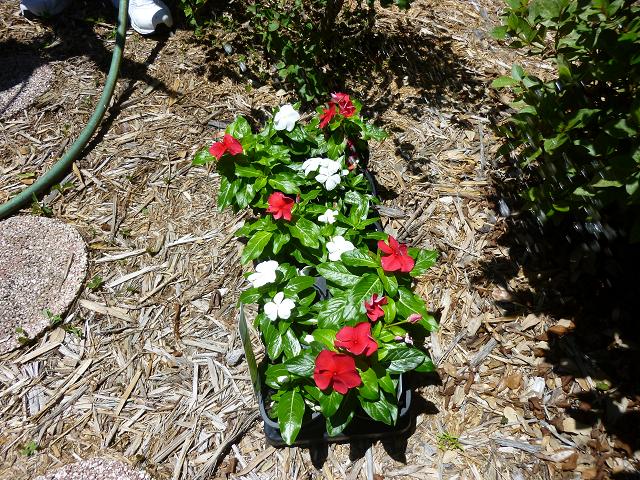 The rest of the day was spent in the pool, sipping margaritas and watching the Kentucky Derby.  Props to Uncle Crappy for publicly picking the winner, I’ll Have Another.  I’m definitely going to him for my Preakness pick.

Dinner was Grilled Steak ala Geezen. 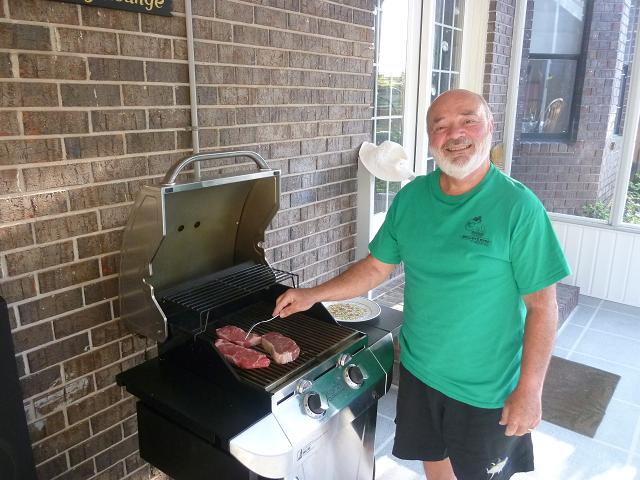 And in case you’re wondering, that sign above the grill, hand-painted by a friend more that 20 years ago, says, “Iron City Lounge.”

There was a huge full moon on Saturday, which really lit up the night.  Unfortunately, I couldn’t get a picture that would really do it justice.  This will have to do instead. 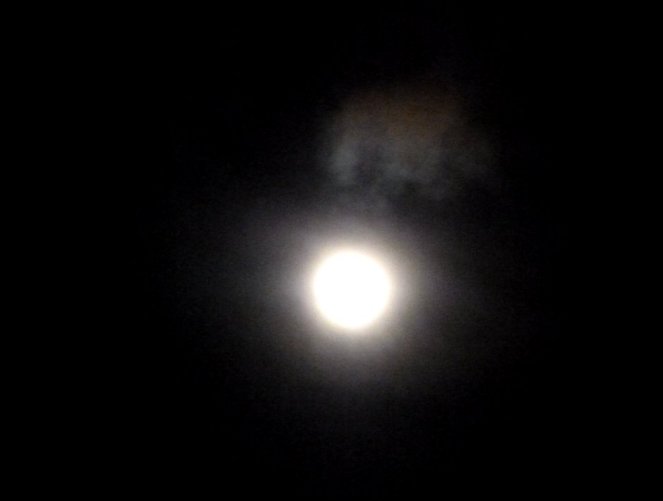 Maybe next time I won’t be too drunk to remember to use the moonlight setting on the camera.

As we rode out the night, out on the porch, Dad told me a new story, which again involved his crazy friend, “The Lob.”

This was back in the 80’s when we lived in NW Ohio.  My dad had a work function at the very staid Inverness Country Club.  This was a pro-level golf course and club that has hosted a good number of PGA golf tournaments over the years.  Why they let THESE guys in, I’ll never know.

So… end of the night, The Lob is pretty hammered.  He and my dad to get their coats from the coat check and something catches The Lob’s eye.  He pointed it out to my dad… three hats lined up in a row, two fedoras and one honest-to-God, Abe Lincoln tophat.  The Lob said, “Watch, I’m gonna go get me a “hat trick,” and then walked over and went, “Wham! Wham! Wham!” as he flattened out each one.

They beat feet out of the place, giggling like schoolboys the whole time.

I had no idea my dad and his friends were such hoodlems.  No more play-dates for those two, that’s for sure.

Anyway, Sunday was more of the same… We opened with breakfast 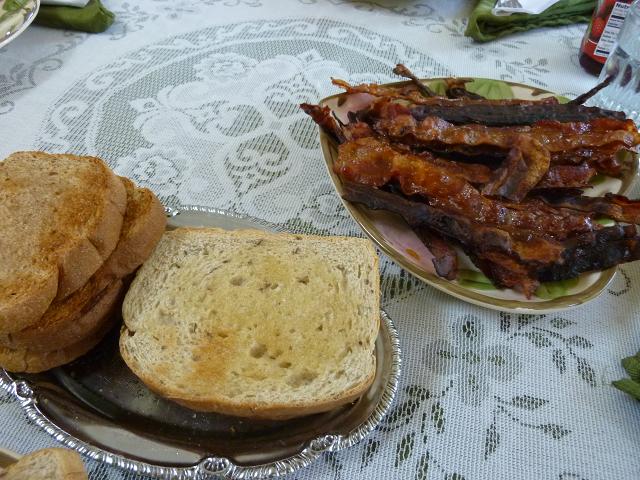 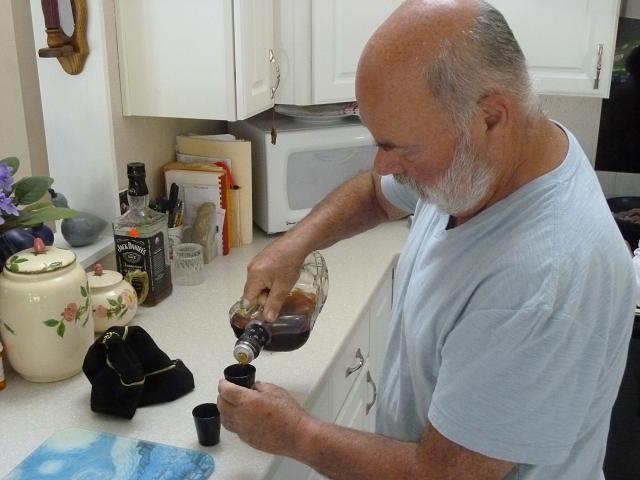 And yo, that's Crown Royal Black!


not necessarily in that order.

Then we spent the day around the pool and playing with Dad’s new accessory. 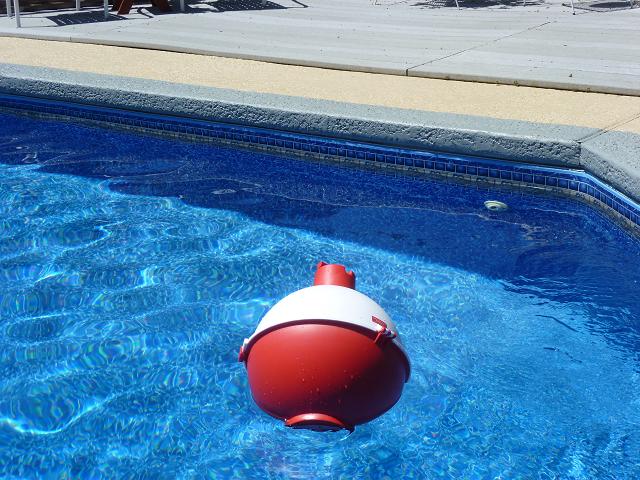 Of course, this isn’t just any bobber… 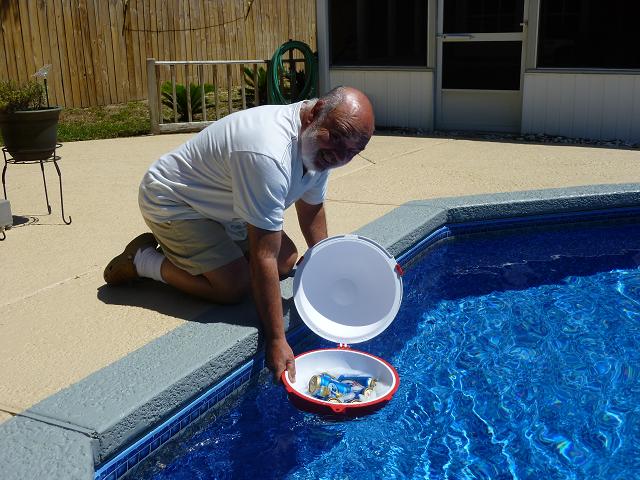 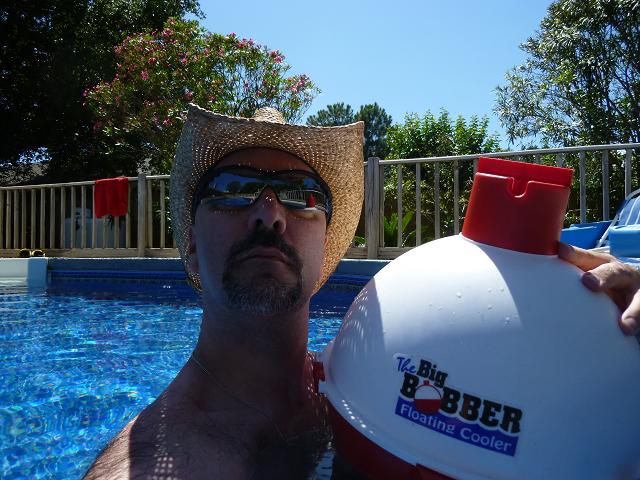 I also spent considerable time stalking the geckos that run rampant around the back yard. 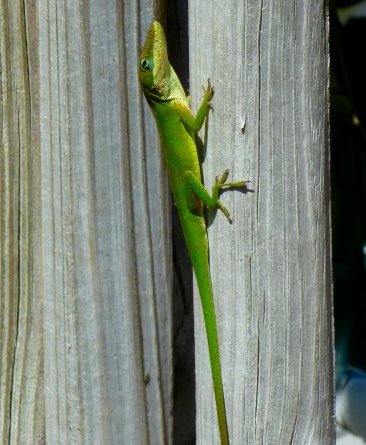 At least he’s not trying to sell me shitty insurance.

There was also another one running around, one that had lost his tail.  He spent most of the time in the shadows, probably out of embarrassment from being teased by the other full-tailed geckos.  I tried to get a picture of him, but it came out too blurry.  It looked like a reptilian version of those infamous “bigfoot” pictures, like it was the Loch Ness Gecko.

The high drama of the day came later, as Pinky and I were sitting out on the porch.  She saw a kitty wandering around in the back corner of the yard.  The yard is enclosed by an 8-foot wooden fence so I figured it had just climbed over.  But it seemed to be in distress.  It sat by the back fence, meowing plaintively.

I told Pinky to let it be, that it found its way in so it would find its way back out when it was ready.  But not being one to let anything alone, ever, she went back to investigate, when she heard the back neighbors calling for a pet.

She yelled over to ask if they were looking for a kitty and they were.  Thus commenced

Pinky told them that they should bring a pet-carrier around to the front.  The neighbors then asked what the address number was.

What, did they think we mailed ourselves here?  We had no freakin’ clue, and the folks were inside.

But they also mentioned that the cat was declawed.  That puzzled me because now I had no idea at all how he got over here in the first place.  Maybe they had a table or something close to the fence on their side, and the cat used that to jump over.

But anyway, once I heard that he was declawed, it became a no-brainer.  Because I didn’t have to worry about getting my arms shredded, while Pinky was in the house trying to get the address number, I went over to the fence to see what I could do.

There was pretty little black and white cat sitting at the base of the fence.  As I’d hoped, he didn’t seem spooked by me at all.  I squatted down and offered my hand and he walked right over for a sniff.  After a quick pet, I picked him up and hoisted him up to his daddy, who was reaching over from the other side.  Problem solved.  I returned to the porch like William the Conqueror.

After we cleaned up, we headed out for dinner.  We were heading to one place down by the beach, but because there was a storm coming in, there was a flood of people coming back from the beach.  This became a problem because we needed to make a left into the restaurant’s parking lot but there was no turn arrow.  With all the traffic coming the other way, only one car per cycle could make the left.  Not wanting to starve to death in the car, we cut out of there and improvised.

We ended up at Jimmy Buffett’s Margaritaville, inside the Jimmy Buffett Hotel.  (No, I didn’t know he had a hotel either.)  The place was nice enough and we had a table right by the window, overlooking the Gulf.  Dad and I went with the All You Can Eat Grouper Bites.

Unfortunately, this place uses the Red Lobster theory of All You Can Eat, where it should more properly be called, “All You Can Eat, If You’re Willing to Spend Your Entire Night Eating 5 Bites Every 20 Minutes, Which is as Fast as We Will Bring You Any More Tiny Servings... Sucker!”

But I can’t complain… We’ve been eating like Kings all week.  I’m sure my circulatory system was thankful that I didn’t load it down with even more fried shit than I normally do.

After dinner, we took a little stroll around the perimeter deck and soaked in some of that Gulf atmosphere. 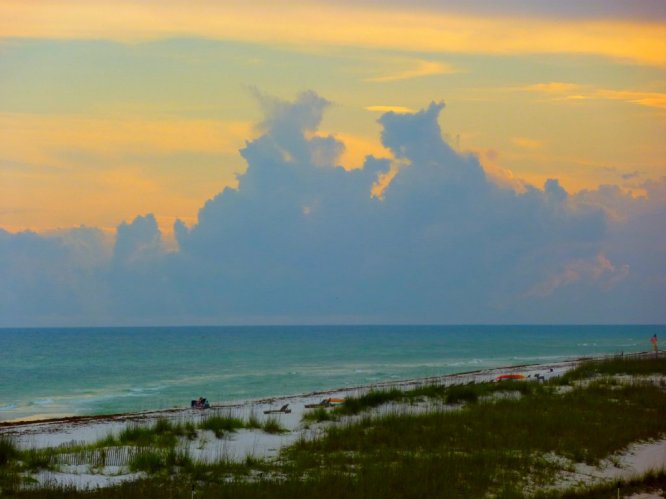 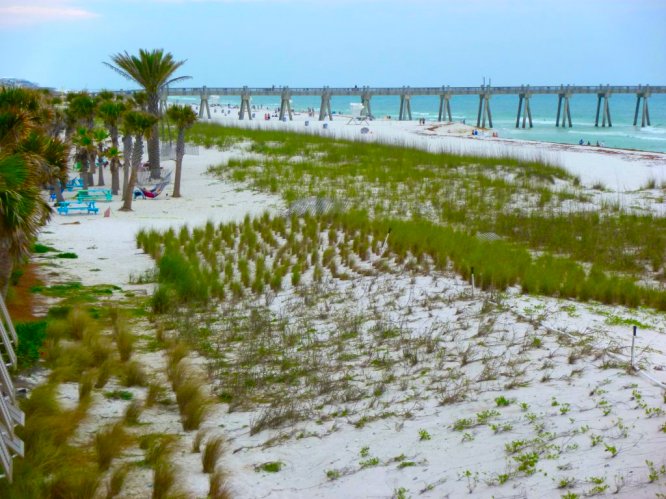 No one can say that I’m a photographer without pier. [snork]

We were going to go down to the beach this morning, but I got up with a sore throat, signaling that I’m about to get one of my colds.  I think I got it on the plane from the woman across the aisle that was coughing up a sundae every 15 minutes.  I know I should have breathed exclusively through the air jet.  Anyway, I’m just going to lay low today.  We have a little shopping scheduled, and a Chinese buffet.  And I know that THEY won’t skimp on the seconds…

And then tomorrow, we leave The Good Life and return to the hamster wheel.