In spite of popular demand, it’s time once again for, Hey Bluz, What Do You Think Of…

… Michele Bachmann’s accusations that the State Department is harboring a Muslim spy?  It seems the Michele Bachmann has managed to claw her way back into the news this week, by starting up the new version of the House Un-American Activities Committee. 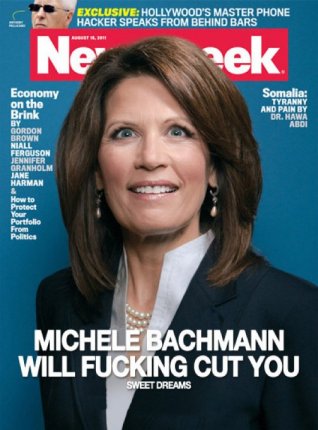 The Crazy Eyes will give you away every time.


She’s demanding an investigation into one of Hillary Clinton’s top aides, Huma Abedin, who you may remember as the supportive wife of former US Representative, Anthony (Is There Anyone that Hasn’t Seen a Twitpic of my Ween?) Weiner.  Bachmann is claiming that Abedin has ties to the Muslim Brotherhood and is feeding them intel.

Glad to see the John McCain still has the balls to speak up for what’s right.  He knows a thing or two about getting smeared.  He hasn’t been the same since the Bushies ratfucked him in the 2000 South Carolina primaries.

Part of McCain’s valiant defense:
“When anyone, not least a member of Congress, launches specious and degrading attacks against fellow Americans on the basis of nothing more than fear of who they are and ignorance of what they stand for, it defames the spirit of our nation, and we all grow poorer because of it.”

On Thursday, a Muslim human rights group fired back, comparing the linking of prominent Muslim Americans to terrorist organization to a game of 6-Degrees of Separation.  And they’re right.  This accusation is like Bachmann is saying she knows Kevin Bacon because she once had a BLT.

…the death of Deep Purple keyboardist, Jon Lord?  Rest in peace, dude.  Without those grungy keys, Deep Purple is just another 70s rock band… Black Sabbath with a better singer.

…That father that refused the Make-a-Wish Foundation’s offer to send his daughter to Disney World?  I usually love it when Bowling Green gets some press, but not like this.

A 4-year-old girl in Bowling Green, Ohio, had just undergone 2 years worth of leukemia treatments entailing chemotherapy, spinal taps and hospitalizations.  After beating back the cancer, the Make-a-Wish Foundation offered to send her to Disney World.

To make the trip, the girl needed permission from both her mother and father.  The father refused, saying that now that she was free and clear of the disease, it would be a misuse of the company’s donated funds.

Later, it came out that the guy had been having a battle with the mother over visitation privileges, and while no one knows for sure, it looks like he was using this opportunity to stick it to the mother.

Meanwhile, the local community is raising funds on its own, to send the girl to Disney World.  See, it does take a village to raise a child, especially when one of the parents is a chowderhead.  Whatever the beef with the mom, you shouldn’t jam up the little girl like that.  Like she hasn’t been through enough crap…

…the president of Chick-fil-A publicly announcing his opposition to gay marriage?
Looks like I have another place to boycott now.  Chick-fil-A president Dan Cathy says, "I pray God's mercy on our generation that has such a prideful, arrogant attitude to think that we have the audacity to define what marriage is about."

He wants everyone in the country to snap to his views on God and marriage, and everyone else is prideful and arrogant…

It sounds like this will be the next guy claiming that some kind of natural disaster is actually God’s retribution for our secular ways.

Next time I see one of those “Eat mor chiken” cows, I’m going to try the steak, right then and there.

…that Sheriff in Arizona claiming that he has proof that Obama’s birth certificate is a fake?  Again with this stuff?  I guess when you’re investigated by the “posse” of the Maricopa County Sheriff of Arizona, that’s the gold standard.  What qualifications, exactly, does it take to become part of some Sheriff’s investigative “posse?”  I mean, other than determining the conclusion first and then backfilling the “evidence.”

This guy is in so much hot water in his own county, over inadequate investigation of sex crimes and racial profiling and other civil rights violations, he has no choice but to start pointing fingers in someone else’s direction.

Another day, another embarrassment for Arizona.  Note to the redneck sheriff: The State of Hawaii says the birth certificate is legal.  Therefore… Case. Fucking. Closed.

…your sore throat and oncoming summer cold?  It sucks.  I left work early yesterday and am going to lay low for the weekend.  I usually fight sore throats by gargling frequently with Listerine.  But you know what works even better?  Jack Daniels.  And if you don’t spit it out, it will help you sleep too.

I know better than to ever spit out Jack Daniels.  If I ever did that, it would cause a disturbance in the space-time continuum, centering somewhere around Lynchburg.  And somehow, I’d be able to hear my Dad yelling, all the way from Pensacola.

But unless I rally big-time, it’s doubtful that I’ll be able to get out to see “The Dark Knight Rises” this weekend.  Next week, for sure.

Besides, I don’t have enough extra funds in the budget to buy new body armor.

Yes, I know I haven’t addressed the week’s “BIG” news from Colorado.  But it’s being worked to death already, from so many angles; I don’t feel that I have much to add.  I feel horrible for the families of all those poor souls, killed for nothing but shits and giggles.

If the country wasn’t so polarized right now, we might have seen some kind of common sense movement on guns.  I’m sure there is come kind of common ground in here somewhere, between All Guns and All Ammo Legal for Everyone All the Time, and No Guns Ever Ever Ever.

If I was king, I’d start with banning the large, assault-style clips.  No private citizen needs an assault rifle for hunting or self-defense.  I know it would take a while, but without the ammo, the assault weapons will become obsolete, so it won’t matter who’s carrying them.

Naturally, the NRA and its allies propose that the answer is MORE guns on the street, so there we stand, at the eternal impasse.  Another example of “American Exceptionalism” gone awry.

OK, maybe I had something to add after all.
Posted by bluzdude at 12:48 PM