As I've thoroughly documented before, I’ve been to three bloggers’ meet-ups in the past, with all of them taking place in Pittsburgh.  I've never met any bloggers from my own locale, here in Baltimore.

I’ve always been a little hesitant to dive into the blogging scene here, as I have a more Pittsburgh-centric blog, and Pittsburgh is Public Enemy #1 around here.  I don’t mean to pick any fights (that aren’t football-related).  But on Friday, I took a step in.

I’ve been following Misty’s Laws for several months now.  Misty is a lawyer who blogs about her family and observations around Maryland and downtown Baltimore.  (The lawyer part doesn’t really play into it.)  I found her via trading comments on Hoody’s blog.

One of the things she does that kills me on a regular basis, is when she takes clandestine pictures of some of the fashion disasters found walking the streets.  I look at these closely, not only to try and recognize the locale, but also to ensure that I’m not one of the subjects.

Since we both work in the same general vicinity, I suggested that we meet up for lunch one afternoon.  That day turned out to be yesterday.

Quick side note: on the way to lunch, I shot this picture, which seemed quite out of place for a busy downtown street. 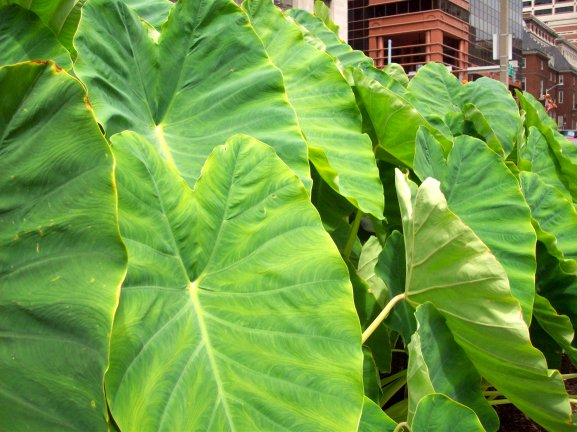 I call it, “Baltimore Salad,” although it probably looks more like something you would have found on the set of “Lost.”

Once we met up, she made sure I knew the Ground Rules, which had to do with preserving her anonymity.  Few people know that she writes a blog and she intends to keep it that way.  I certainly didn’t have a problem with that, as I’m more or less anonymous too, although I don’t go to quite the same lengths.  I just want to keep this blog out of Google searches on my actual name.  But obviously, if someone knew me, and found this blog, they’d know it was mine.

Anyway, it was cool.  We had a delicious lunch and yakked about her experiences with the legal system, out mutual blogging acquaintances, and our brushes with the movie business when the filmmakers set up downtown.

We had a great time and I hope we can do it again, now and then.  And perhaps even draw in another blogger or two.  (Thoughtsy and Hoody, I’m looking at you!)

In keeping with the Ground Rules, I won’t post any photos of us together, but I was given permission to run one of Misty’s traditional meet-up shots. 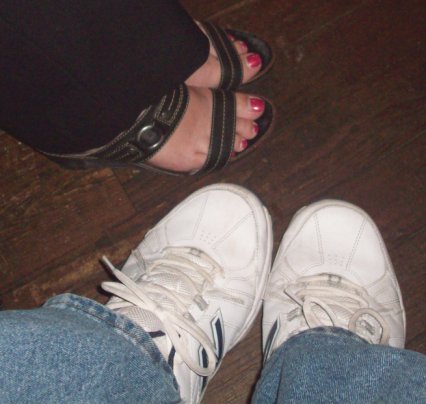 Here you have the feet from the two of us, making this a Ground Rule Double.

And now, it’s time for, “Hey Bluz, what do you think about…”

…the two Florida teens that have been attacked by alligators?  I think it’s a hoax.  Everyone knows that alligators aren’t found in US rivers; they’re found under your bed.  Every kid in America knows that…

…the news that the use of the anti-hair loss drug Propecia may cause long-lasting sexual side effects?  Geez, another tough pill to swallow for bald guys.  It’s bad enough that they get overlooked by our culture in general and women in particular, making it very tough for them to get laid.  But now if they take steps to correct the problem, they still can’t get laid.

What a Catch-22… stay bald and be ignored, or grow hair and be unable to get it up.  Luckily I prefer the tougher but more gratifying route; to find the rare gem that appreciates a perfectly-shaped head that’s untarnished by messy, “product-filled” hair.

But on the bright side to all this, maybe we can start feeding Propecia to sex criminals.

“Boy, Jerry’s not screwing kids any more, and does his hair ever look great?”

…Mitt Romney getting booed at the NAACP convention?  I read a columnist, I can’t remember who, that said (and I’m paraphrasing from memory), that no one should call his appearing there an act of bravery, because everyone knows that the NAACP is not his constituency and is not likely to vote for him.  He had nothing to lose by appearing.  An act of bravery would be appearing before his own people, say, the NRA, and advocating some kind of gun restrictions.  THAT would be bravery.

I’m going one further.  I think he was counting on getting booed, to solicit sympathy (and votes) from middle class independents and conservatives who might think, “Oh look at those savages booing the poor man…”

You think those boos aren’t going to be used in political advertising this year?  Count on it.

...the continued use of Monty Python references to describe this season's election?   I love it!  I saw this article that notes about a half-dozen different pundits that use Python sketches to compare to political stories.

* Rick Perry’s denial of his dying candidacy being compared to the Dead Parrot Sketch.

“Now that’s what I call a dead parrot!”

* Rick Santorum’s and Newt Gingrich’s refusals to give up being compared to the Black Knight from Holy Grail,

* The politics of wealth-denial, compared to the Four Yorkshiremen Sketch, wherein each character boasts about how poor he was when he grew up.

“We were evicted from our hole in the ground… We had to go and live in the lake!”

* The Republicans’ policy of consistent rejection of anything Obama proposes, compared to the famous Argument Clinic Sketch, where John Cleese disagrees with everything Michael Palin says.

“An argument is a collective series of statements, intended to establish a proposition.

“Yes it is! It isn’t just contradiction.”

“Look, if I argue with you, I must take up a contrary position,”

I think the pundits may have missed one.  What do you get when you mix the Republican’s Argument Clinic-esque Party-of-No-obstinacy, with the Holy Grail of a presidential election? You get… 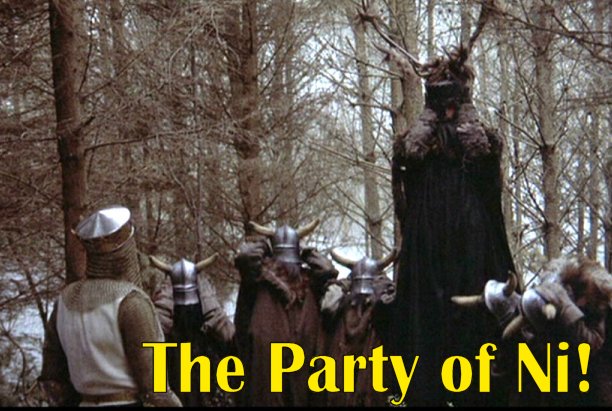 Update: You can see Misty's post about our lunch by clicking here.
Posted by bluzdude at 12:09 PM