I know that no one is reading blogs this summer, but since it’s too damned hot outside to do anything else, here I am, writing anyway.

It’s supposed to reach 104 degrees today.  It’s been in the hundreds downtown all week and it’s to the point where I almost dread going home every night.  Stepping outside is like walking into a punch in the mouth, and our front door is shaded by 5:00.  Then when I step out into the sun, it feels like I’m about to disappear in a puff of smoke, the way those vampires do when the guy turns his fancy headlights on him in that commercial.  Just walking to and from the subway makes me feel like I’m breathing hot pudding.

Yes, I know it gets like this in the south all the time, but here in the upper Mid-Atlantic region, we’re just not conditioned for that.  Pity the poor folks that don’t have their power back on yet.

OK, enough bitching about that… there are plenty of other things I can bitch about…

WTF, Blogger?
With all the changes Blogger has been making, I keep hearing about people having all kinds of trouble with it.  Up until this week, that trouble has missed me, but it sure found me on Tuesday.

As I was putting up that day’s post, I noticed that I needed to add a label to my prior post.  I went in and made a very quick update, then hit {Update}.  Unfortunately, I think I was too quick.  Because my post was still loading into the template when I clicked {Update}, I ended up fixing the label problem but completely wiping out the post!

I noticed that just after I published the post I was working on, which triggered a mild panic attack.  It was only minor, though, because I’m me.  And me keeps every post I write on a Word file, as backup.  So I was able to very quickly lay the post back in, thus avoiding trying to remember everything I wrote about the first time.

The weird part is that it bumped the post up by one entry, so that it appears after the “Power Outage” post instead of before.  I guess in the greater scheme of things, I can live with it.  But it totally messes up my month-by-month stats, making my scant June postings look even skimpier.

Van Failen’
Remember how I was all excited to take my 13-year old nephew to his first rock concert, to see Van Halen, and then they postponed their tour?  It gets worse.  I found out last week that they have now cancelled the rest of the dates on their US tour.  They were originally scheduled to be here next weekend.

Bastards!  Is it really that much to ask that they get their collective shit together and honor their obligations?  People like me shelled out a lot of money to see their aging asses play the songs we so fondly remember.

A lot of people get hurt with things like this, because it’s not just the band that’s affected here.  The arena loses a date, which means no work for the arena staff, technicians, vendors and maintenance people.  The area loses because there are 16,000 fewer people coming downtown to eat and drink, or just pay for parking.  And I don’t get to be a corrupting influence on my nephew. 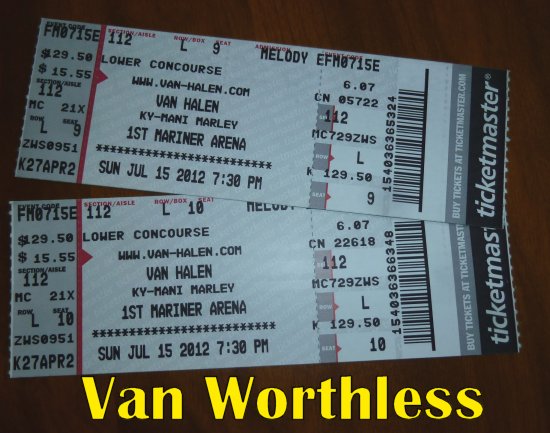 I had the damned tickets in hand!  Gah!  So close…

Ticketmaster is supposed to be providing refunds.  I’ll be following that situation very closely.  I paid almost $150 each, which is more than twice the amount than the highest price I’ve ever paid for a show.  (George Thorogood, $65.50 in 2008.  Also, $75.00 to see Springsteen in 1984, but that included a bus ride from Toledo to Detroit and back.)

And speaking of the refunds, they better refund ALL of the ticket price. Have you ever seen all the freakin’ fees they tack onto concert ticket orders?  Holy shit!  Look at my receipt: 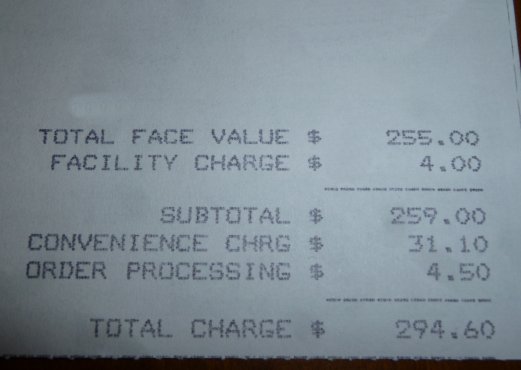 The fees tack on an additional $19.80 per ticket!  That’s more than I paid for most of the concerts I’ve ever been to!  And all that is for using a ticketing system that requires LESS human processing and handling than the old methods of distribution.  “Convenience Charge,” my ass.  We’re charged for their convenience!  Just call it the “Because We Can” charge.  Freakin’ leeches are what they are…

But not all my retail news is bad.  I received my Lehigh Valley IronPigs hat this week! 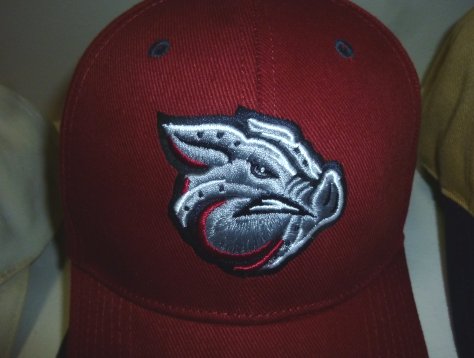 And thank you to the Carpetbagger, for telling me that an “Iron Pig” isn’t just a nonsensical minor league baseball team name; it’s an actual thing.  It’s a nickname for a squat iron railcar used for hauling coal up out of a mine.  I can always count of the Bagger for gems like this.

But it’s actually a more logical name than the one for the Single-A ball team around here, the Aberdeen Ironbirds.  The “bird” part comes from the fact that they’re affiliated with the Baltimore Orioles, or “The Birds.”  And the “Iron” part comes from the fact that their owned by Cal Ripken, aka “The Iron Man.”  Plus there is a military base in Aberdeen, meaning planes, or “Iron Birds.”  OK, I guess it does make sense after all.

Hot Cross Words
Back in November of 2009, I wrote about my crossword puzzle habit.  (I do them every day at lunch.)  The focus then was that I had just come off a huge streak of correctly completing 36 Baltimore Sun crossword puzzles in a row.

Now I haven’t come close to a streak like that again… I think my next best may be around 18 or 20 in a row.  I always shoot myself in the foot by doing something stupid.  But I was pretty proud of myself today, because I completed the Saturday crossword (traditionally the toughest one of the week), in pen! 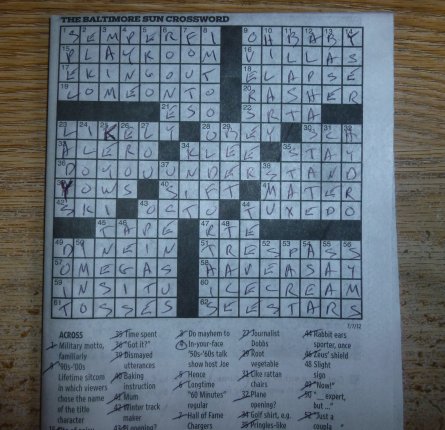 Only a couple of trouble spots…


Not bad for a guy that was just too lazy to go across the room to get a pencil.  And then for bonus points, I did the Jumble in pen, too.  No chance on the Sudoku though.

A Story: “Body Language Counts”
Part of my job is to set up and assist with the Audio/Video part of my company’s meetings and town halls.  My colleague usually handles anything that the company president does, and I take care of the rest.  Last month, I was asked to help him out for a meeting held by our president.

She was having a Q and A session, so he needed someone to help to get microphones to people in the room that wanted to ask questions.  It’s not that the room is that big, but that there are also people calling in, and they can’t hear anything that’s not on mic.

Our handheld mics have different colored foam caps on the end.  We had red, green and blue, so I obviously picked the blue.  Bluz gotta represent, even if only subliminally.

Once the Q and A started, I stood up and to the side of the speaker.  Most of the questions came from the other side of the room, so I was not called upon to move very often.  For the most part, I stood there at attention, with my arms crossed low at the wrist, and the mic pointed downward.

After the event, I spoke with a friend, who giggled at me, poking fun at the way I was holding the mic and noting what it kind of looked like.  I hadn't considered that aspect of the visual.

All I could say was, “Thank goodness I didn't use the red one.”
Posted by bluzdude at 1:09 PM