Cheap Beer is the Real Mother of Invention

Yesterday I had to run down to Camden Yards at lunchtime to pick up some baseball tickets for the weekend, when the Yankees are in town.  For the first time since I moved here in 1997, the Orioles are still in the pennant race in September.  I also heard that in a bid to raise attendance, the team is selling bleacher seats at 1997 prices ($4.00!!) for next week’s series against Tampa.  Because Pinky is only good for about one game a year, I thought I’d see if Sitcom Kelly wanted to come into town for a game.

We probably see about a half-dozen games a year, usually right after work.  We meet up at a bar outside the park called The Bullpen, and pound cheap beers there before going into the game.

Anyway, she agreed to go. (You can’t beat a $4.00 ticket, even if it is for the bleachers.)  This was the email exchange that resulted.  (My various explanatory comments will appear in yellow.)

Sitcom Kelly: Yay.  Just what I need.  Who is the player? (…whose name will be on the shirt.)

SK: Cheap beer is more important than another free T-shirt.

BD: You should put THAT on a T-shirt.  OR, we can pitch it to The Bullpen, so they can do it.

SK: Yeah, but I want royalties.

BD: They can pay you in beer.  You know, this is a really good idea.  And they can personalize them to their slogan, “Cheap Ass Beer is more important than another free T-shirt.  They could sell them there.

(That’s the Bullpen’s thing… they have a guy out front with a sign that says “Cheap Ass Beer,” waving people in.  Inside the walls are covered with pictures of people with the Sign Guy.)

And I should get royalties too, because it’s my idea to make it a slogan and peddle it.  You know, we’re like a drunk Lennon and McCartney… No matter who does what, we both get credit.

What do you think the odds that either one of us will remember this by next Thursday?

SK: That’s why I save my emails.  Heck, I’m going to design the T-shirt and take a sample with me on Thursday.

(There is zero percent chance of that actually happening.)

I think we should go there since the season is almost over and I haven’t had my fill of cheap ass beer.

(Later, after having obtained the tickets…)

BD: Had lunch at California Burrito, right across from The Yard.  Had a burrito the size of a baby’s torso.

Was it you that first took me there, years back?  I was thinking “you” because one of the answers to my daily crossword puzzle was “ziti.”

SK: It was me.  Was the question, “What do hunky hockey players eat while being held in my Silence of the Lambs Pit?”

BD: Anyway, my tickets for the weekend were OK… 4th row.  But I’m still just a little miffed to be paying $50 for $30 seats.  Pinky wanted to go to a game this weekend with her brother and his girlfriend and the only weekend games left this year are “Premium” games against the Yanks and Red Sox.  I don’t mind sticking it to the out of town fans, but if you show a Maryland driver’s license, they should waive the “premium” fee.

(The Orioles charge a considerably higher price for the big games, aka “Premium” games, against the Yankees, Red Sox and Phillies, which tend to draw a ton of fans from the visiting teams.)

SK: Why don’t you suggest that to them and see what stupid answer they give you.

(Sitcom Kelly wrote in last year to suggest that they have real hot dog races, like other parks do, rather than doing it via the scoreboard.)

BD: “The fans like the pricing schedule the way it is…”

(That’s pretty much what the Orioles told Kelly when she wrote in about the hot dog races.)

SK: That’s it. I’m writing another letter.  I’m going to get a reputation.

SK: Another letter or reputation?

SK: So, the bleachers… does that mean they don’t have backs?

BD: Yes to backs, no arm rests or cup holders.

BD: Down your throat, I imagine.

Next, maybe we have to invent a cup holder that’s worn around the neck.

SK: I could get one of those stupid large foam fists and hold my beer in that.

BD: You do that and I guarantee before the 3rd inning, you pour the beer all over yourself.  Or worse, all over me.

SK: I’m going to invent portable beer holders.  They have something like that for wine, but you have to stick it into the ground.

BD: There should be a tripod-like thing where the legs fold out and there’s a telescoping expandable tubed stem, with the holder at the end. 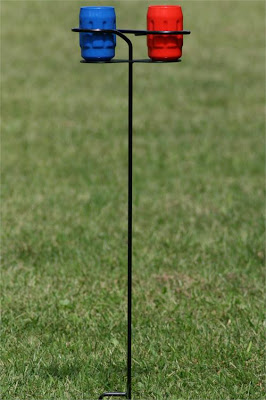 BD: Yes, only it should be plastic or PVC or something light, or they won’t let you in the stadium with it.

SK: Why, because we could use it as a weapon?

BD: Exactly.  Although it would be nice to brain a Red Sox fan with…

SK: How about a blow-up beer holder?

BD: I can just see you deflating it.  [Pttttttthhhhhhhhhhhhhhplllblblblblbbbb]
People in front of you turning around to look…

SK: Or how about something that’ll clip onto the seat/bleacher?

BD: That would be uncomfortable for whoever’s sitting in front of you to lean against.

SK: Soooo… it’s not about them and their comfort, it’s about me not having to bend over to pick up my beer every time I want a drink.

Stay tuned for further adventures.  You can also check out Sitcom Kelly’s blog, That’s Our Kelly.  If she gets a few comments from people that aren’t me, she might start posting again.
Posted by bluzdude at 8:09 PM