OK, I’m tired of linking them all individually, but I've been writing about my early experiences working retail.  If you’re new to the series, you can pick up the trail from the beginning by clicking here for the first “Retail Bluz” post.  I now pick up the tale as I was running a large, freestanding record store in Maple Heights, Ohio.

By far, the most daunting task for me as a retail manager was staffing.  It was a real jolt, going from just another schlub with a key, to the guy that interviews, hires, and fires.  It was a major step up in size of Big Boy Pants.  As I've mentioned, your staff can make you or break you.  And I probably made every mistake there was because I got broken a lot.

It’s a fact that every retail manager has to face every single day, that even though he may have done everything right in training his employees, anything that they screw up is his fault, in the eyes of the higher ups.  It doesn't matter if you show your clerk how to greet a customer, harp on the importance, demonstrate it every day… one day someone important will walk in, the clerk won’t greet him, and it will be the manager’s fault.

Sometimes I think that’s the only reason retail managers are necessary… to be convenient receptacles for blame.

I mean, for the most part, my staff was made up of kids and while this was a “career” for me, it was just a part-time job for them.  They didn't really have a stake in the store’s success.  So it was a hurdle just getting people to care.

If I have one piece of advice to give the young Manager Me, I’d tell me to listen to my DM when he said that I should always be interviewing and always have a stack of promising applications on my desk.  My biggest staffing problems always started with having to hire someone out of immediate need.

When you had someone quit right before a big weekend, (usually to take another job making a higher wage or getting more hours), you couldn't afford to be picky; you just had to find someone with a pulse that who would work the hours for minimum wage.  So it’s no wonder that I wound up with some bozos from time to time.

When I was hired, my boss asked me a series of questions he used in every interview.  That became my original template for conducting interviews.  If you ask the same questions, you have an even basis of comparison between applicants.  I used that question list for years before I became more comfortable with interviewing.

After a time, I found I changed my focus in interviews from a “Q and A” to more of a conversation.  I’d use the question list as a jumping off point and then go from there.  I was more interested in getting a sense if my applicant could string a coherent thought together and think on his feet.  If they couldn't hold up their end of a conversation with me, how could I expect them to sell to customers?

I always tried to hire the extroverts, to counter my own introverted nature.   The company was all about up-selling and getting add-on sales.  I hated that stuff because I hate “selling.”

If you think about it, I was probably the worst salesperson in the district and was completely unfit to lead a sales staff.  I mean; I knew all the theories and techniques, but executing them rubbed me the wrong way.

When I’m shopping, I hate being sold to and am repelled by pressure, so I was never comfortable with doing that to anyone else.  To me, a perfect salesperson lets you know he’s there, offers assistance and then remains available for questions later.  He does not try to talk you into buying a bunch of crap you don’t need or push music you've never heard of.

For example, the company was always on us to push blank tapes at the register.  We were supposed to say, “Hey, these blank tapes are 99 cents apiece… [laying 3 of them down on the counter]… how many do you want?”

I absolutely refused to do that.  I find it incredibly pushy and presumptuous.  As a customer, I would shut down anyone doing that to me and I’d shop somewhere else next time.  So I wasn’t going to do it to anyone else.  It’s just rude.  I had no problem with pointing out the blank tapes and asking them.  The phrasing makes the attitude, I say.

One thing I was VERY good at was playing “Name That Tune” with the customers.  You wouldn't believe how many people came in wanting a song, for which they didn't know the artist or title or, well, anything.  If you were lucky, they’d know lyric or two.  Sometimes they’d just know a bit of the tune and they’d try to hum it for you.  And then they would get mad at US if we didn't know what they wanted.  I’d be like, “If YOU don’t know what you want, how can you expect ME to know what you want?

Anyway, if my people got stuck on a customer's Name That Tune request, they’d bring me in, like “the closer” from the bullpen.  I should have had my own walk-up music like they do in baseball.

The funny thing was, I usually hadn’t even heard the song, but I was real good with artists and titles, just from doing the ordering or just reading Billboard.  Far more often than not, I could figure out what they wanted.  But it could be really challenging.

Customer: I’m looking for this song I heard on the radio… I don’t know what station.  I don’t know who sings it or what it’s called.  There’s something in the lyrics about “love.”

So for the store to function, I needed friendly, quick-thinking extroverts to execute what the company wanted us to do on the sales floor.  Having music knowledge was fine, but not essential.  Artists and titles could be learned on the fly.  It was more important that they could use the available tools to find the information or product they needed.

I often ended up hiring the people I enjoyed talking to.  Sometimes, a good interview would last an hour and a half, as the conversation would range all over the place.  It was really like having a first date.  We either clicked or we didn't.

I remember one guy who totally screwed the pooch.  He was telling me about his previous job, working for a waste management company.  That wasn't the problem; it was that he said that he was glad to be out of that job because the company was “run by a couple of dirty Italians.” 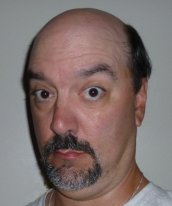 Picture this face, only 25 years younger.

He must have read my “Are you fucking kidding me?” expression because he started walking it back immediately.

“Oh, are you Italian?  Sorry, I didn't mean anything by that; it was just these guys were this and that and blah blah blah.”

Yeah, that one went right into the “circular file.”

But if you could have a decent conversation with me, (assuming you met my logistical needs) that was most of the battle.  Then I just needed to see that you were presentable, had some common sense and a little personal ambition.  And because of my predisposition towards interesting people, I ended up hiring a fair share of flakes.  I mean, I like flakes, sugar-frosted and otherwise.

I remember one girl who used to crack me up on a regular basis.  She kind of channeled (80s comic) Judy Tenuta’s “goddess” persona as her default demeanor.  She was fun, but kind of mousy.  Then she’d come out with some bizarre, salty statement right out of left field.  Like one time when she was feeling some job pressure and yelled this at me in the back room:

Other things she said:
“I crossed hell and high water and lots of Irish people to get here, goddammit!” (after coming in on St Patrick’s Day and encountering the parade.)
“Correction fluid… the Holy Water of stupid people!”
“I curse this safe, and all its ball bearings!”
"I am NOT a fundamentalist pagan god!"
“ I've rounded up the primates… now what?”  (meaning she just pulled all the Monkees titles.)
“Fuck you!  Everybody likes me, goddammit!”

She became my Third Key in short order.

Director’s DVD Commentary: The reason I can reproduce those lines, even after all these years, is because I used to keep this little notebook of people’s quotes.  It was a habit I picked up in college.  Whenever I heard someone say something funny (especially when out of context) I’d put it in the book with their name and the date.  Believe me, she had a bunch of them.  I could do a whole post from the Quote Book.

Like my DM before me, I enjoyed spinning people off into their own orbit.  Like when I took Maple Heights, there was a 17-year old girl working there, who had just graduated high school.  She was very sweet and quiet, had a good head on her shoulders and was very conscientious, so I quickly made her a Third Key.  She was into Top 40 so I put her in charge of singles; (the records, not the dollar bills).  Not long after that, she moved up to become my assistant manager.  I had to work with her a bit to get her to become a little more authoritative, but it was gratifying to see her blossom.  Before long, we spun her off into her own mall store.  I was very proud.  I’d post her picture here, but we’re still in touch and she’d probably kill me.

Of course, the downside was that I then had to replace her.  While I preferred to promote from within, often times it wasn't possible, due to logistical limitations or aptitude.

Sometimes I could get someone from another store transferred in.  The upside was that they were familiar with our systems and needed minimal training.  The downside is that sometimes, it was a matter of one store transferring their problem to another store.

So there were some rocky times when I found myself surrounded by a bunch of bumblers, but for the most part, I had some good staffs.  You try to keep the good ones, let the dumdums wash out before they do too much damage, and hope for the best.

But the main thing I took from my experience in that store was that for the sake of my sanity and emotional and financial well-being, I had to get the hell out of retail.  I had a plan to do so, but to pull it off; I had to get in even deeper.

To be continued…
Posted by bluzdude at 6:49 PM