So much going on this weekend, I owe it to you to cover as much as I can.  So lets get started, shall we?

I Know a “Whopper” When I Hear One
Don’t you love it when you become a clearinghouse for all news on a particular subject?  Ever since I wrote a post on the 62-foot half-a-Jesus statue at the Solid Rock Church in Monroe, Ohio, (aka “Touchdown Jesus” or “Big Butter Jesus”) and it’s subsequent immolation via divine lightning strike, whenever something new develops, I hear about it.

Today I received an email from an old high school friend, who attached an article about how the 50-foot replacement statue got stuck in a McDonald’s drive-thru in Wapakoneta, OH.  The idea tickled me down to my very soul… there were so many ways I could go with the story.

But then I read it…  It was still funny, but I realized it was intentionally so.  The article was a spoof by “Derf Magazine,” who basically made it up, the way The Onion does.  While I probably should have known that any site called “Derf Magazine” would have to be a spoof site, I actually figured it out during the second paragraph:

“It was the loudest, craziest, most disturbing thing I have ever seen,” said McDonald’s employee Darren Bick. “One minute I’m typing an order into the computer, the next minute there is a thunderous noise, the building shakes, and the face of Jesus is pressed staring at me through my drive thru window. I’m going to have nightmares. If I ever sleep again.”

Nice work, Derf.  Cracked me right the hell up.

No Sense Acting like Prix
This weekend, Charm City is hosting an Indy Car road race called the Baltimore Grand Prix.  The first one was held last year, which was supposed to get the bumps out of the process for subsequent races.

It was funny because after a request from the drivers last year, the organizers removed a little “chicane” or mild zigzag from the beginning of the main straightaway.  The problem with that emerged during practice runs, when the cars let it rip at the start of the straight-away, launched three feet in the air after hitting the Light Rail tracks.  The chicane was keeping the speeds down before the tracks, so now they were hitting at a higher speed and becoming airborne.

Not being able to reduce the size of the bump, race officials reinstalled the chicane and the problem was solved.

Now, do I car about racing?  Not even a little bit.  But on Thursday, a bunch of us from work went down to the Inner Harbor for lunch and had to mosey right through all the track preparations.  Because I a proactive sort, I brought my camera with me. 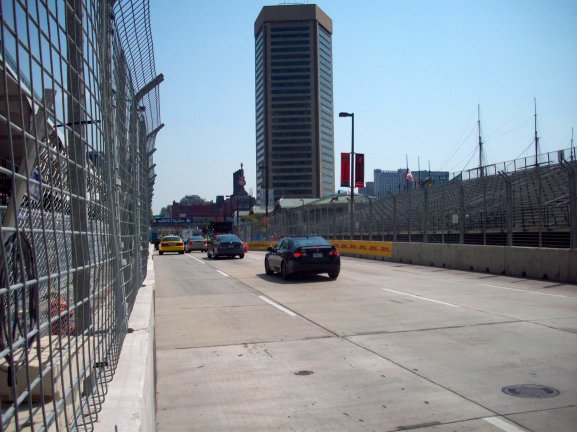 This is the track straightaway, which runs down Pratt St, across from the Inner Harbor.  Obviously, those aren’t Indy Cars, although I bet some of our cabs could tear that course up. 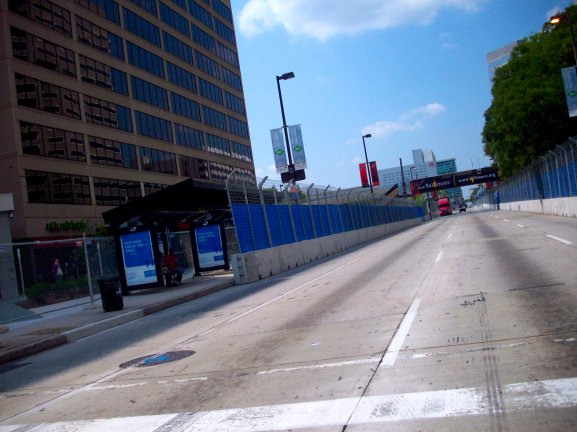 This is the same part of Pratt St, looking the other direction (west).  Note the blue tarps, placed to keep non-paying customers from getting a free look. 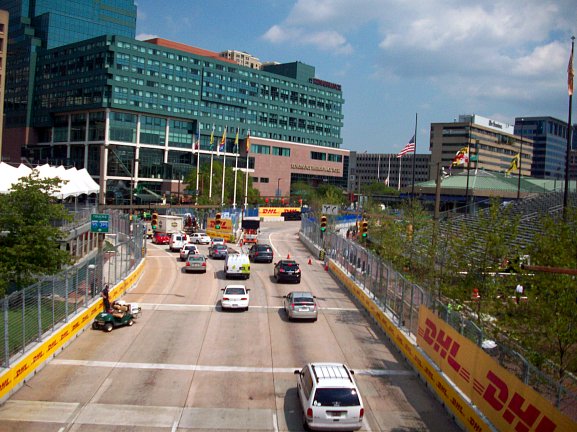 I took this from a pedestrian overpass, which runs over Light St.  To do so, I had to reach the camera up over a blue-tarped chain link fence.  Hah! I scoff at their ineffective security measures!

What’s wrong with me that I brought a camera to shoot pictures of a road, rather than our Hooters waitresses?

Fair Game
Speaking of racing, I did get to watch a little of it in person on Saturday.  But the racers only went 1-horsepower apiece.  I made my annual pilgrimage to the Maryland State Fair and spent the day betting the ponies.

I’ve written about these trips before, so I’m not going into any great detail.  I had a decent day at first, hitting Exactas (picking the first and second place finishers) on 3 of the first 5 races.  None of them won me much money, so I was very close to break-even after the first 5.  But then I lost the next 4, often just barely.

I had one pick go down when the second-place finisher got DQ’d.  I had two others lose when my second place pick got nosed out at the end.  Anyway, I lost $28.40 on my day’s betting, which isn’t too bad for 5 hours worth of live entertainment.  Couple that with the $30 spend on admission, parking, program, tip sheets, 2 pizza slices and a beer and I lost $58.40, which is just around the ceiling for what I would call an acceptable day’s loss.

Again, I brought my camera, because there is nothing like live-action horserace shots. 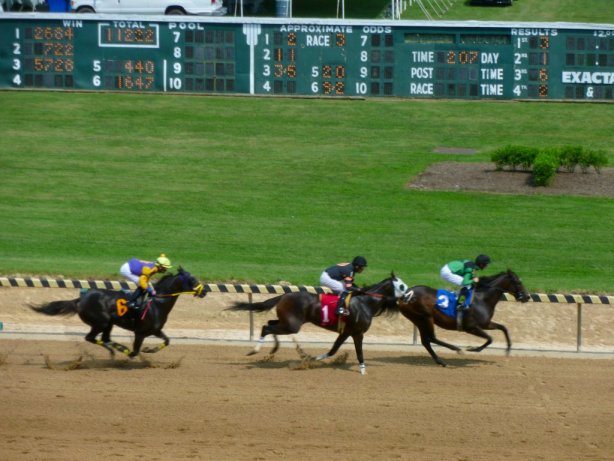 Rock n Roll Gal (3), Benedicta (1) and Centripetal Motion (6) coming down the first straightaway in the exact order I picked them in the Trifecta. (Top 3 finishers, in order.) 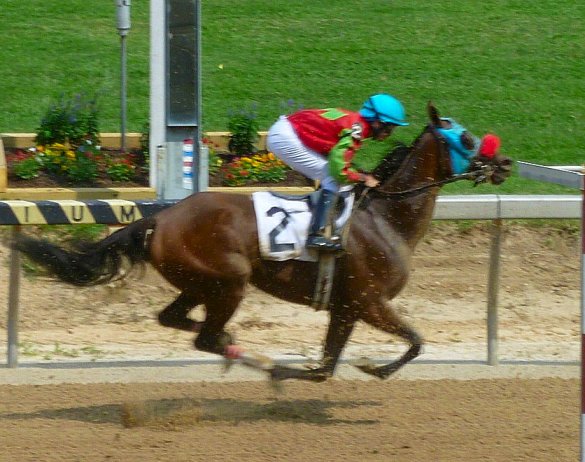 Star Money, on his way to ruining my Trifecta, as he nosed out the “6” horse for third.

One thing I learned today: The aesthetic beauty of a running horse is directly proportional to what place it’s in and how much you bet on him. 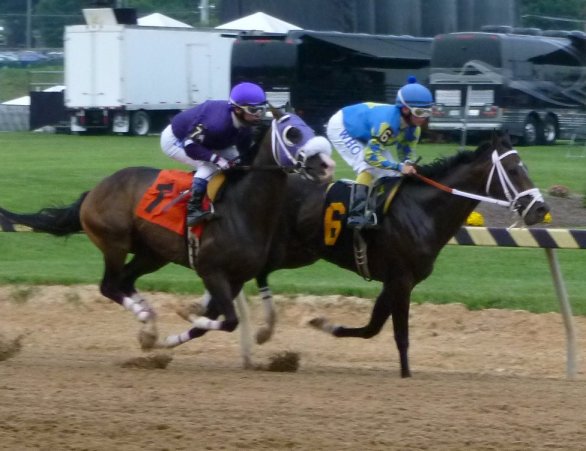 You may remember the Ho brothers, Wes and Chris, from the first State Fair Racing post I did in 2010, where I had much fun with their names, among other things, wondering if they had another racing brother named “Stanky Ho.”  Funnier still was when that post caught the attention of their mother, Momma Ho, who let me know in Comments, that she got a kick out of the whole thing.  I promised that in the years to come, I’d always lay a couple of bucks on a Ho.

Well, Wes Ho (aka “WHO”, per his pant leg) didn’t help me out in the 4th race, but in the 9th (and last of the day) he came through with a win for me.  Unfortunately, my pick for 2nd was beaten by an loping interloper, so I was still SOL.  But as a favor to Mama Ho, I did get this shot of her boy in the winner’s circle. 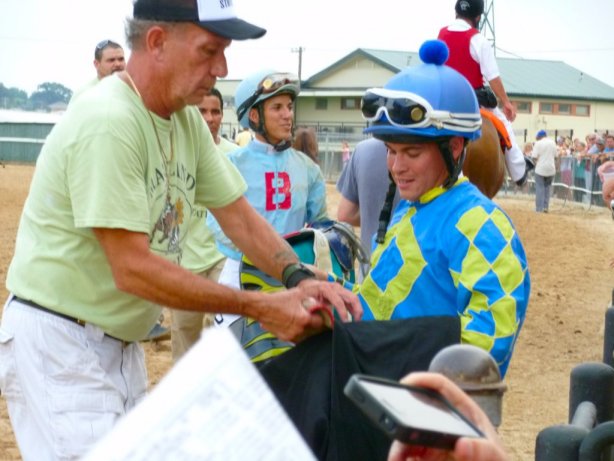 The Dude A’Bidens
The Republicans were in the news today with their new strategy to go at the president via undermining his VP, Joe Biden.  This made me crack up.  I mean, is the party of Sarah Palin and Dan Quayle really throwing stones over vice presidential abilities?

Biden’s been dealing with national issues in the Senate for eons.  Ryan’s a relative pipsqueak, who specializes in obstruction and co-sponsoring protest bills with zero chance of going anywhere.

Now I know Biden’s kind of a loose cannon out there, and you know what?  I like that.  He shoots from the hip and says what’s on his mind, unlike most other career politicians.  I like the change of pace.

I remember when he was running in the 2008 primaries, watching a town hall appearance he was doing.  I remember thinking that the guy made a lot of sense.  If he was still around by the time they held the Maryland primary, I might have even voted for him.

Let the Republicans throw more shit at the wall.  At least our guy knows that there are two Koreas, unlike their last VEEP pick.

If Biden speaks, I might even tune in to the Democratic Convention.  I usually avoid both conventions like the plague.  If anything noteworthy happens, I can read about it later, or find a clip online.  I look at the conventions the same way I look at pre-season football.  All I can do is hope that we look good and no one gets hurt. 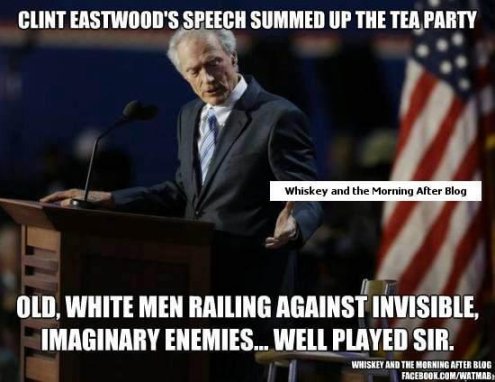